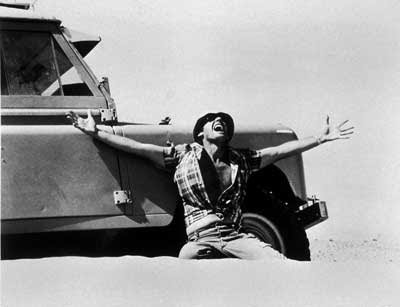 Perhaps the only concerns that this movie can raise are existential. And to it are added the strains of a thriller, elements of a detective story, suspense and deceit, then we are witnessing great art. To be bold, I am suggesting that this may be Antonioni's best movie, even better than L'Eclisse or L 'Avventura, for here the major themes that are the subjects of his oeuvre generally are brought to fruition in The Passenger.

A man by profession a Journalist, played by jack Nicholson in Saharan Africa is in search of rebels involved in a civil war. Failure to meet them and his vehicle breaking down in the desert frustrates him. At his hotel, he discovers a casual acquaintance called Robertson lying dead in his room. Nicholson decides to assume his identity, after staring into Robertson's eyes for a longish time. He leaves everything behind, a succesful career, wife and loses himself into Robertson's persona. He then starts living as Robertson, who he discovers is a gun runner. Thus begins his clandestine meetings with African rebels and his chance encounter with the girl, played by Maria Schneider. However, Nicholson's wife wants to meet Robertson to ascertain her husband's last moments and across Germany and finally in Spain, we run up to the final denouement.

Why does Nicholson assume another identity? It seems to be a response that stems from a sudden development, that of Robertson's death. It is clear that he is escaping throughout the movie but it is quite obvious that he is escaping from himself, which means his career, life and his wife too. When his vehicle breaks down, he screams and breaks down, and after that he looks different. It is not relevant whether he has had a sudden conversion in the desert, for through flashbacks we see his not really acknowledging the beauty of the desert. However, afterwards, he seems to behave like a man convinced, convinced of the futility of his actions, debating to settle down as a waiter or writer. This man is thus aware of his actions and is clearly understanding his actions. His travels are not part of a fugue state, for he is conscious of his memory.

Schneider, nameless, plays an intriguing role for she is his ready helper as they flee his wife and the contacts from Africa. She is too friendly, too reliable and even at his insistence does not leave him. And yet when he checks in the hotel in Spain, she has checked before him as Mrs Robertson. It is thus apparent that she might have been Robertson's wife, no, she is Robertson's wife and when we witness the last shot, long-tracking for 7 minutes, we witness the girl talking to the contacts and finally Nicholson lies dead in his room, on the bed, almost like Robertson himself. Nicholson's wife arrives to say that she doesn't know who he is, presumably suggesting that now, she doesn't know him now.

The Passenger is a great movie, because it does not assume to tell us what it actually does. It is not a dull, boring, drawn and listless existential tale but a sustained suspenseful account of a man who decides to lose it, throw it away, all, everything because of a crisis, a real crisis and confirms the alarming futility of it all. It is evident that his marriage too was crumbling and his wife, played by the beautiful Runacre, is having a lot of guilt, thus necessitating a search for her dead husband's last contact. The performance by Nicholson is superb, for he plays a man detached, alienated from himself and lost in losing himself. I also think that Maria Schneider's performance is really good though she seems to be generally dismissed by film critics after her Last Tango thing. Her restrained salvo is rightly in tune with this middle aged man, and she adds a certain menace to Nicholson's furious rage, but this rage is more metaphysical than physical.

The camera work in this movie is the subject of numerous discussions including the last shot which is incredible, especially the camera breaking through the window. The background score is minimal, almost non-existent and one does not notice that for it seems to be not required. This movie is the work of an artist who is accomplished, confident and sure of his craft. It amazes me as to why this movie is so under rated. In spite of that, this movie has everything and demands more than one viewing for the camera tricks are so deft that I missed a few things that were only visible when I read about what I had missed.
Posted by Kubla Khan at 1:48 pm

When I saw John Malchovich but particularly Nirvana, by salvadores, I thought a lot to this Antonioni. So many things his generation of film makers seemed to have understood earlier. But what always saddens me is the inevitable end, the necessity of dying that change seems to imply. Like if the fear of change had/has a real concrete fall out, other than pain. Maybe pain is a form of death, but rebirth is possible, like skins for a snake. this heroic charachter instead always die as a consequence of daring. not an appealing option, why?

One of the pitfalls of an existentialist position is as if the protagonist knows everything through his esperiences. one failure of this movie is the African backdrop, desert etc as if to bring home the desolate solitude of a successful man. in other situations, modernity has been over emphasized in capitals of industrialist societies, empty streets have shown fear and despair , yet one asks.....does one want to become modern to experience a spiritual crisis?
this is where I find the philosophy of the absurd or existentialism a bit pretentious, as if one must move forwards to step back.
life, without any technical or spiritual advances always asks a person to think and suffer.
these movies and similar novels or philosophies seem like narratives of those who have to get alienated to suffer afterwards.
no, even in a desert, in less "modern" societies, amongst colonized and not colonized people, the concerns are always the same.
Another failure of such movies is the inability to engage in any meaningful discourse about "them", by which i mean the "backward" races for whom this vacuum doesn't apparently exist.
but it always has, no more, no less than everywhere else.