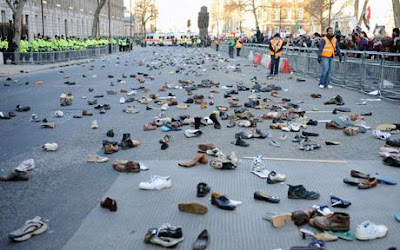 From the Embankment and along the river, then ending at Trafalgar, people have protested today against the insane atrocities of Zionism and its benefactors. People had also protested years ago before the Iraq occupation.

The shoes strewn on the street above, thrown in disgust by the protesters will not protect the Gazan's but it is a token of protest, of anguish against the double standards that construct our world view, the weltanshauung that modern Europe has inherited and the insane occupation that the Palestinians have to endure, year after year.
Posted by Kubla Khan at 10:13 pm