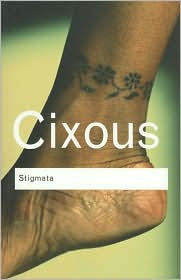 Whatever her primary concerns may be, whether they be political or feminist, one can read Cixous for her lyricism alone. And nowhere is it better demonstrated than in her collection of essays called Stigmata. These collected essays deal with a variety of issues, from reading in painting, as evidenced in my previous incomplete post on Bathsheba to her cats, her real cats. Cixous' best essay, I think, in this collection is called My Algeriance: To depart not to arrive.The conception of our identities, the changing nature of our identities, the mosaic of our internal and external identities is called into question. Then the question of writing and the relationship an author has with the text, the celebration of such issues and the writing of the body: these threads run through her essays.
Cixous very clearly demarcates the forged nature of various identities, especially for those who identities have been constructed for them or those who seek to tear away from the conventional nature of such fictions. Cixous is quite aware of her dual identity in Algeria, her jewish identity which separates her from the French and the French-Jewish duality that estranges her from the Arabs. Cixous is at pains, from her previous reflections and experiences to identify with the subjugated identity and at the same time, on arrival in France to question the nature of arrival. Cixous is no stranger to inventing new words and her neologisms are quite clever and some very poetic. She sees herself as not having arrived but being in a state of arrivance; to depart a place would mean to arrive somewhere, but only after having departed? And then one can settle into a particular identity only after clearly going step by step through the rubric of such forced identities or arrivances.
She deals with these issues with a lyrical force that is astounding, but also with a certain degree of lyrical play which questions the nature of such narratives. The interplay is between philosophy and politics and fiction and how such threads weave into or away from each other. Thus what seems like a political question dissolves into a profound melancholy, and the reader, unprepared like me, sways between passionate lyricism and profound politics or both. However, it is actually in subverting all genres that Cixous aims at, whether it is reading Rembrandt or talking about Fatma, the Arab domestic who, it turns out after twenty years, is not Fatma but Messouda. The feminist concerns are woven into her anxieties about identities that are subjugated under colonialism but also about the reframing of such identities after post-colonialism.

Most of our reading, instead of doing away with our prejudices seems to augment them; Cixous' reading of Bathsheba for instance cleverly subverts the pre-conceived nature of such readings, which obviously not only depend on our mind states but the rungs that lead to such states. Our perceptions, which we think are our own, are in constant danger of being subverted. Conventional reading reinforces such perceptions. Texts like Stigmata allow us to re-evaluate our conceptions of not only our reading but the aftermath of our reading and in allowing us to perhaps reframe our absurd accommodations with ideas that we feel comfortable with. It is one thing to acknowledge in public what one holds on the smithy of our conscience and another to actually conform in a meaningful way. The rest is just chatter. Cixous does this all in the most poetic, most lyrical way. And as I said earlier, one can read her for the poetry alone, regardless of our other agendas.
Posted by Kubla Khan at 3:29 pm