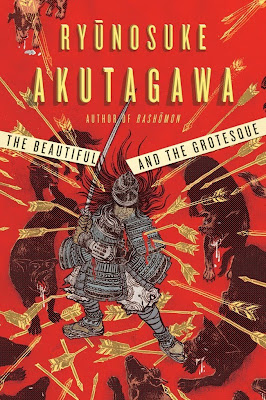 If reading fiction meant that some kind of illumination is expected, then that would be reading for the wrong reasons. If one reads sometimes to lessen one's misery, that too is an odd reason. Since I don't know the primary reason behind reading, may I say that if one wants to be enchanted and discomforted at the same time, if one wants to be hypnotized and saddened in one instance, then one must not look further away but pick up your Akutagawa. In Akutagawa Ryunosuke, Japanese Literature gives us many reasons to carry on reading. Reading Akutagawa is drinking of a chalice that while poisoned is also rich in that liquid which the gods might like too.

In a Grove, also made famous by the movie is the oft quoted text of Akutagawa's. His Kappa is not far behind. What however I find derisory is the way publishers bracket certain writers to sell books. For instance, the book of Akutagawa's that I am reading these days is called an The Beautiful and the Grotesque', for his fiction is usually seen as belonging to that particular kind of fantastic fiction genre. It is a certain attempt at orientalizing aspects of non-western fiction and here in is no exception. Even though the Kappa might seem outrageous and perhaps fantastic, to include all the stories under the title I just mentioned seems bizarre. The first story in this collection is called The Robbers and in no way is it grotesque. There is beauty in it, of a most melancholic kind, and beauty in the writing. That this first story is fierce in it's treatment of what it wants to say is a testimony to the greatness of the writer.

There is no way that I can possibly describe the melancholy of The Robbers. The depiction of mood, the evocation of scene, the dramatization of the elements, there is almost a mis-en-scene quality to the writing. The action that takes place in Kyoto, the concrete descriptions of the streets, the almost mesmerizingly haunting and almost provocative constructs of the visual elements of this story are just mind numbing. The description of the plague that is affecting Kyoto around the time the events are described is caught hauntingly in the passage below:

"The breathless sky, hung with humid summer heat, spread over the houses; it was a certain noon in July. At the crossroads where the man had paused there was a willow.....the leaves on its sparse branches so long and slender that one might think it suffered from the plague prevailing at that time; it cast its meager shadow over the ground; and at this place there was no wind to stir the leaves withering in the sun. And, on the highway scorched by the sunlight, where presumably because of the intense heat there had for some time been no passer-by, there wound in long sweeps the trail of an ox carriage that had passed some time before.......Everywhere fiery dust bathed the crossroads........there was not one drop of moisture........" And again........"Restless swallows flashing their white bellies, from time to time skimmed the sand of the street; over the shingled and cypress-bark roofs the crowding dry clouds of fused gold, silver, copper and iron showed no sign of movement. The houses built on either side were so hushed and still behind the wooden shutters and bulrush blinds that it might have been doubted that throughout the whole city any were still alive".

This collection comes with a very enthusiastic introduction titled 'A Sprig of Wild Orange' and shows the enthusiasm of the translator, who is clearly an Akutagawa lover. The book has wonderful stories, depictions of situations, but more than anything else, the evocation of mood and atmosphere.
Posted by Kubla Khan at 12:07 am