The Shoe Tester Of Frankfurt 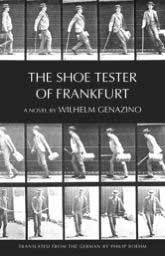 It is usually my habit to write about a novel or any book I read days, weeks or sometimes months afterwards, but on this occasion, I am making an exception, for this novella is an exceptional one, having bought it alongside 9 others recently in a fit of melancholic mania, which is an oxymoronic state of mind. I think I have just invented a new mental state, one which is neither recognizable nor describable.

Wilhelm Genazino is a German writer and as far as I am aware, this is the only novel of his that is available in English, translated wonderfully by Philip Boehm, and published by New Directions, a publishing house that has given us Krasznahorkai and other great new writings. Genazino has written quite a few novels and has won the Georg-Buchner-Preis, Germany's highest literary prize, in addition to numerous other literary accolades.

The story, told to us by the narrator is simply this: a man in his forties is employed by a high-end shoe manufacturer to test their new products, that is shoes. And our narrator, who discloses his profession by page 40 or something tests his shoes by walking the streets of Frankfurt, submitting his reports to his employers and earning his wage. During the course of his travels, he describes the things he sees on the streets, recollecting events from his past life, childhood with an uncanny sense of observation. He does not pass judgement on what he sees but describes the events that unfold with the burden of a man who fails to understand the purpose of his life.

During his travels, he describes not only the city but his own state of mind, and then weaves them together and paints a picture of existential frustration and helplessness but not rage. His resigned attitude towards not understanding his life, his reflection on his failures is attached to the impossibility of his coming to terms with the purpose of life in general, to what he calls his unauthorized life, a life that he is living without his being asked to. He also describes his relations with the women he has known, whom he meets quite frequently on his travels, and his unrequited emotions are not a source of rhetoric against them. In particular, he talks of his loneliness after one Lisa has left him, knowing that she won't come back. In the end, forced to resign from his shoe testing, he reverts back to his previous occupation of breezy writing, for he no longer desires to scrutinize myself, waiting for the outside world to finally fit my inner texts.

This short novella is written with such subtle beauty, economy of emotion and dignity of space that I finished it in two stints, forced by the brilliance of its atmosphere. And what a novel idea.......shoe tester! I have never heard of any profession like this one before. The prose is charming, witty, ironic but not self consciously so. What makes this novel different from other existential rants is the melancholia that pervades each page. This is a melancholic existential triumph, for unlike such other novels, the protagonist actually achieves a compromise, a kind of peace in the end.

A striking thing about Genazino's novel is its striking resemblance to the art of Thomas Bernhard and particularly his the loser. At one time, I thought I was reading Bernhard, for at times the narrator lets go of himself. The difference between this narrator from a Wertheimer or Roitheimer is that he does not go on long rants but immediately rushes into a melancholic apology. Yes, that is quite crucial for he is more conscious of his fragility. And like in Bernhard, there is another character, an estranged friend, who is not or does not appear as sane as our narrator. However, the women here have more substance and more wit.Some of the expressions that Bernhard has coined are matched by Genazino. I will give a few examples here......

liar's asylum, silence schedule, private craziness, unauthorized life, play- craziness, crying threshold, and experience proletarians, are among a few of the numerous inventions in this novel. Another striking resemblance with Bernhard is repetition, though it is not as forceful or as incessant in the former, for when it is about to achieve its hammering effect, he mellows down, slows and becomes sad. For instance.....

I recently came up with the idea of sending a silence schedule to everyone i know- or, to be precise, everyone who knows me. anyone who refuses to comply with the silence schedule would no longer be able to speak with me at all. Monday and Tuesday are/ would be listed as non-stop silence. Wednesdays and Thursdays non-stop silence only in the morning; the afternoons would be considered relaxed silence-.........Sundays would consist of total silence.

Another passage......a little wrapper sails onto the street where it makes a nice soft noise as i pass. i would like to stop and listen to the crinkle of the candy wrapper for a few more seconds. i would like to name the collective peculiarity of all life crinkle. And this..... a little gloomy melancholy flies up to me, i carry it with me across the bridge. an equally small pain clowns around inside me saying: you need to look for what you stand to gain, and accept the offer. i can cope with the pain, but i have to do something about the melancholy.

I could quote more but suffice to say here that this is not just a great novel but a readable one unlike other great novels that are not always readable. Originally published in 2001, the English translation came out in 2006. Unfortunately, no other work of Genazino is available in English. This is a new voice, soft, sound, melancholic and harsh. It is important too for it tackles the important question of the futility of life if there is no afterlife. I say to the few readers of this blog.......acquaint yourself with the shoe tester of Frankfurt.
Posted by Kubla Khan at 12:37 am

wow, another writer i had never heard of. it sounds really something that would interest me. i will try to find it.

Alok
I bet you will fall in love with this novel!