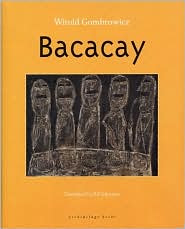 Imagination and in short everything is possible in the world of Gombrowicz. This collection of short stories, called Bacacay for no reason, is the great writer at his most macabre, best. Described variously as fresh, vigorous, weird, wonderful, seductive, repulsive, alarming and amusing, as you can see, the adjectives that describe this collection convey something that one could expect on reading them. And yet, they do not really describe these stories altogether, for these stories or tales or sketches are actually quite bizarre, outre and to a great degree disconcerting, producing in the reader a certain feeling of being in the vicinity of danger, of having been near something odd, unusual, strange and yet unnameable, indescribable.

Bacacay and Bakakaj in polish is named after a side street where Gombrowicz lived in Buenos Aires, whilst in exile. Thus the stories could be named after anything, after his dog or cat. The carelessly named or so it seems name conveys intrinsically the inner theme of these stories, which is actually nothing. The stories are at once absurd and surreal, impossible and remotely possible at first reading. But, on second thought, it is actually, to myself, quite possible to be in the presence of this malice. One is usually just a few seconds or a few veils away from an absurd thing or a surreal encounter. That it does not usually happen is incomprehensible to me, for I believe that this is not the prerogative of fiction alone. Any absurd encounter or a fantastic narration is not impossible in reality and then, what is reality anyway?

Apart from two stories which are taken from Ferdydurke, the collection contains previously unknown material, this a collection that Gombrowicz burst with on the Polish scene. And he says,
"From the beginning the nonsensical and the absurd were very much to my liking, and I was never more satisfied than when my pen gave birth to some scene that was truly crazy, removed from the healthy expectation of mediocre logic, and yet firmly rooted in its own separate logic. A writer can apply a different method in which reality is reduced to its component parts, after which these parts are used like bricks to construct a new edifice, a new world or microcosm........which ought to be different from the regular world, and yet correspond with it in some way........different but, as the physicists say, adequate".............

Mark the words.........healthy expectation, separate logic and regular world. In fiction, we always want a regularity, a kind of the real world transferred to the pages we read. Yet, it does in no way detract from reality if the absurd or illogical is also part of the reality we encounter, for, in real life, it is only the illogical that abounds. And then, different fictional narratives increase the richness of literature and present to the discerning reader, a confusion of colours. The craziness of these stories or the comicality is in no way different from what all Gombrowicz wrote. In the last year or so, I found the same method in his novels like Cosmos and Pornographia. In fact, strangely, I did not find them strange. Oddly, there is a certain gothic undertone or a detective shade that lurks in his tales, which has always been a certain fondness in my own literary hunts.

One of these stories here concerns a man invited to a vegetarian dinner, with the question of actually having soup made up of a disappeared man in the background. It is at Countess Pavahoke's who later misspells her name as Havapoke. The comical is always near the sinister, while having cauliflower soup, they learn of the disappearance of Valentine Cauliflower, a stable hand! I found all the stories brilliant, with A premeditated crime, Adventures ( a man imprisoned inside a bubble on the floors of seas, later floating in a basket over Chinese faces) and On the kitchen steps outstanding. Of course, you could read the afterword by the brilliant translator Bill Johnston first, but that is not necessary in my opinion. To find out what the stories really mean is a naive exercise, for in their reading alone lies the refuge of those smitten by a certain fever.( Gombrowicz explained what the stories mean)

I would add this book to the collection of strange fictions, written by Borges and to some written by Cortazar. Gombrowicz writes in a prose that is mostly poetry, and the poetry is quite obvious and so easily discernible and has come to him so easy; the poetry is filled with a menace, of the shadow of some old memory, as he says. These stories reflect the encounter of the normal with the the layer just underneath the normal. These stories are the trembling notes of that encounter. I am, against my own will, starting to read a certain kind of strange literature, that written by Alfred Jarry, Cendrars and Schulz. I will, hopefully, in the coming months write about these strange, enticing and miraculous works of literature. All life and all literature is a miracle. The absurd and the macabre are as real as the regular and the simple. And as common.
Posted by Kubla Khan at 1:17 pm

sadly, I couldn't get too far with Ferdydurke when I took it up last.. that was a few months ago. May be I should give it another try.

I also got Blaise Cendrar's To The End of the World from the library a few days back. The first few pages were very interesting and quite funny.

Hi Alok.....i w'd say you sh'd give it another try.
strangely, i am reading Cendrars too and the same book!