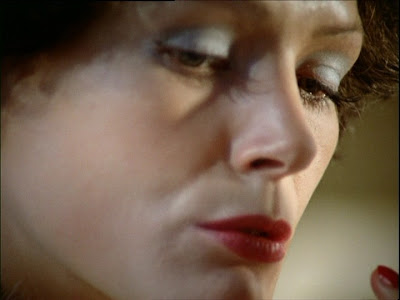 Petra Von Kant lives on an island, the island of her apartment, the claustrophobic spaces of her bedroom, in her bed. She is surrounded by herself, she has a huge Angelo like painting on a wall, depicting a nude man among other things and she orders and rules Marlene, her helper, her servant girl, her whipping post. We meet her when she asks Marlene to be considerate, as Petra lies in bed, as Marlene draws the curtain. Each of Petra's moves and actions are slow, deliberate, artistic, dream-like. And Marlene, the worshipper, the sufferer. This is the first act of Fassbinder's great movie, a movie that is not only a celebration of a certain kind of tragedy, but a relentless description of the same. This movie is also a virtuoso act, shot entirely in one room, with long almost real time scenes, mis-en-scene and a fabulous attention to a certain kind of interior decor.

It is soon obvious that Petra and Marlene are locked, with Petra commanding Marlene into anything, Marlene the submissive. Petra's friend Sidonie then drops in. What follows is Petra's relentless deconstruction of her marriages, as she goes into all the sordid details of her two marriages, ending in divorce. Petra looks at the past from her point of view, while Sidonie wants her to look anew. Petra, it seems has been used and abused herself, as there follow descriptions of being mounted by a bull, ending in pain. however, the characteristic definition of those relations is in the desire to control, the interface of relations, the daily tugs of war and the need of lovers to dominate, to own, to possess. Petra has lost effectively what she wanted to own, from her point of view, with herself as the centre. however, she has decided to be free, after loving and losing. This scene later introduces us to Karin, played by Hanna Schygulla. Karin is Sidonie's friend and Petra falls in love with her.

Petra Von Kant has surrendered herself, now she is surrounded by Karin. Karin, it is obvious, reluctantly likes Petra, does not love her. However, Petra obstinately refuses to accept this, and Karin refuses to give in. Karin describes a night of passion with a "black man with a European face" and Petra simmers in jealousy, unable to accept that love can also live with infidelity, only there is no love here. Karin leaves Petra, having used her to climb socially, leaving Karin in a haze of gin, shouting and screaming at Marlene, her young daughter and her mother who have come to celebrate her birthday. The scene is rapt with tragic poetry, Petra lying on the shag carpet, a phone in front, gin besides, waiting like lovers do, disconsolate, unhopeful, hopeful, for that one call, one hello from Karin.

Petra has a final conversion, she "longs for sleep, wants to sleep, for death is quiet". She acknowledges that love can only be love "without demanding". She had hoped for "beautiful" love, with lovers sharing everything, the inner and outer lives, not merely obeying certain codes of behaviour. But, this is not possible, everything is lost. In the last act of this "case history", Petra wants reconciliation with Marlene, a relation on equal terms. Marlene, who has not spoken throughout the movie, refuses that, packs her bags and leaves. Petra gets in bed, turns the lights off, the credits roll.

The Bitter Tears of Petra Von Kant is a sublime movie, a kind of approach that squeezes the hypocrisy out, that leaves little scope for affectation. It is so relentless in its dissection of relations and love, so minute in its observations of struggle between people, power issues and yes, class distinctions too. Petra's sadomasochistic relation with Marlene, her weak position with Karin, her rejection of her daughter, her disdain for her mother are ample demonstrations of power schemes, affectations, so-called love and so much hate between people. The final act, when Marlene rejects an equal relation with Petra is her final rejection, leaving her completely marooned in her bed, surrounded by nothing.

From a pure cinematic perspective, I thought this movie is ravishing, ravishing because it makes out of her bed, from her shag carpet, ash-tray, gin, Marlene and her idiosyncratic dresses, and her nude man on the wall, a possibility, a world that other directors would have struggled with in a thousand different sets. There being only one room, the claustrophobic court room style deposition of Petra, her constant melancholy, Marlene's silence, Karin's greed enhance the ardour, the passion of those walls and the space limiting narrowness of those relations.
When Petra is lying on her bed, listening to a song and Karin, eyes closed dances nimbly with Marlene typing away, that scene, that image is truly one that is unforgettable and depicts the utter isolation of everyone there.

Petra Von Kant is a true tragic figure, for she suffers the real classical tragedy and this movie portrays what love can mean, what sexual power is and how it can be manipulated. It doesn't just depict lesbian love but bi-sexual love and there are no men in this movie. They have been left behind or they are in the periphery. Importantly, while Petra has loved, she has had no emotional resonance with her lovers. That is the most important issue Fassbinder conveys.
It is not just a great movie, it is an astonishing movie, with visuals on a grand scale. It is epic and colossal and the performances of Karin, Marlene (Irm Hermann) and Petra ( Margaret Carstensen, in a performance of sustained brilliance) are all brilliant. Marlene with her quiet menace, Karin with her naked need and Petra, the tragic woman, lying, sitting, standing, wax like, human, and not ever detestable, crying occasionally, tears visible and bitter.
Posted by Kubla Khan at 1:45 pm