The Pornographers: Introduction to Anthropology 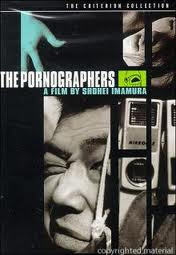 Ogata's boat has found it's way from the backwaters of Osaka to the seas, Ogata is inside his boat, looking and marvelling at the perfect woman he has crafted, stitching each hair separately on her, each painful step a further step towards realizing his perfect woman, with whom he can sleep at will and look without fear. This is an image that persists after The Pornographers comes to an end but: before this we have been through a maelstrom of other emotions too, and Ogata whilst occasionally philosophising , didn't struck me as a poetic type. In Ogata, Imamura has created a character who alternately hovers between the caring and the unscrupulous, between the lecher and the artist that he eventually becomes. Imamura calls his movie an "introduction to anthropology" and the world he shows is messy but not one bit artificial. It is messy because it's roots are deep inside the soil of furtive and restless minds. Even to Ogata's sidekicks, the human imagination is something one can only be afraid of.

Ogata is essentially a bum, he is a man who makes 8mm pornographic movies and sells them to clients of all sorts. Ogata is also a pimp and distributor of cheap literature and as a tenant supports his landlady and her son and young daughter with whom he is clearly obsessed. The duality of his nature is a tightrope that we must walk on, Ogata is without any scruples entirely and hence full of surprises. His landlady Haru sleeps with him at will and she keeps a Carp behind her bed in a tank, the carp is the reincarnation of her dead husband. Every time she does something bad, she says, the carp jumps, which is practically throughout the movie. In Haru, Imamura shows the social dynamic of a kept woman, it is usually the man who keeps the woman, he pays for her bum son and her daughter's studies.

The social realities which force such power changes are very obvious. Ogata and his cohorts are caught between the mafia and the law and hence his procrastination is quite complete throughout. It is not the lack of a reaction to such realities but a lack of self reflection that Imamura shows throughout his movies and here. Ogata has one eye on Haru and another on her daughter Keiko, he wants a child with Haru and marriage to Keiko, Ogata sees the inversion of all rules within a social reality that is seemingly out of bounds from the bigger niceties of life. Ogata philosophizes when he relaxes with his other colleagues, there Ogata desrcibes the realities of his situation carefully, he is also very aware of the human condition too.

Haru is later a victim of her own denials, screaming inside a cage, a woman hysterical and paranoid while Keiko is a willing victim of her own anger, systematically killing herself. Ogata throws the carp into a river after Haru dies, and retreats into his boat to perfect his perfect woman. Ogata has realized the 'pathos of being a man', as he sees it.

The Pornographers is a movie that fascinated me and like all of Imamura's movies, the social milieu that he has sketched is something that while seemingly reflective of a Japanese "underbelly", symbolises at least for me the invisible tentacles of our own minds. I am not willing to see the movie only as a critique of political and social realities or of a particular society nor do I think of it as a shocking indictment that shows incest and the indignities of lust; I think of these characters as inhabiting those terrains of the mind that are let loose when economic and cultural realities and the people who control and sanction them have lost the moral force to speak. Within the arc of such desires and the darkness of such minds arises the craving to create a perfect woman, an object, a commodity, a fetishism that absolves, apparently, the moral agent of any blame whatsoever.
Posted by Kubla Khan at 6:15 pm