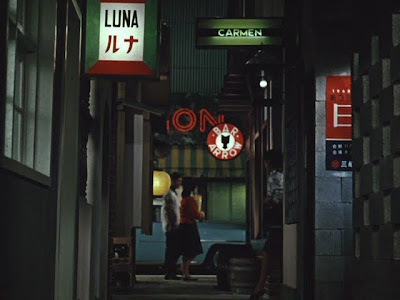 Ozu Yasujiro's Late Autumn continues the central theme of traditional values and family life which is a characteristic feature of Ozu's oeuvre. Made just before An Autumn Afternoon, it would be silly to use cliched formulas to describe this film, however, sometimes one resorts to over used cliches and one has no choice. In my very considered opinion, this movie is an intense masterpiece. It begins and ends with a colour schematic which represents Ozu's subdued depiction of plot and characterization. The interior is green-grey and aquamarine, it is autumn, again the tones are dulled, the signal trees, leafy autumn, the aftermath of mourning, the colour of melancholy, the so-called minimalist interiors, the economy of expression, the discipline of emotion, the subdued pain.

I think this is one Ozu movie which, on second viewing recently, I found with pervading sadness even in its lighter moments, and lighter moments it has. Akiko and her young daughter are shown together with her dead husband's friends at a funeral ceremony. The friend's recollect the times whn they knew Akiko as a salesperson at a chemists when they were all young, and how they all pretended to be ill to go and see her. All their efforts are unrequited and now, years later, they plan, at first frivolously and later with some seriousness Ayako's and even Akiko's marriages. Akiko, the mother, stays unknowing of all these plans and behaves in a dignified manner when Ayako wrongly assumes that her mother is planning to get married too. The bond between the friends and their Friend's widow is affectionate and strong and nowhere does it lapse into silly sentimentality or any profuse excess of emotions. Akiko finally decides to continue to live as a widow, in this autumn of her relational life even though she is quite young. Yuriko, Ayako's friend, leads a spirited defense of Ayako's position after her daughter blames her mother but it all ends in restoring what seems to be an appropriate end.

Ozu's treatment of this theme shows the women as very independent and strong willed and the backdrop of the traditional versus the modern is cleraly an important part of his concerns. The performances are heart warming, especially Setsuki Hara's as Akiko, who was central to many Ozu movies. I particularly enjoyed Okada Mariko's Yuriko as a very charming portrayal of this very effervescent young woman, who takes on the three well meaning and scheming men. The scene when they all have sushi at her mother's restaurant is brilliant in its complex simplicity. Well, that is Ozu, extremely complex, seemingly, disarmingly telling us tales about family and values and life and love and yet, like Early Spring, which this movie is so close to, surrounding the sensitive viewer, even in his or her casual voyeurism, with a life that most strikingly shows the sadness, the ennui, the melancholy of cycles which life is composed of, which we live. All of Ozu's trademark technicalities are in evidence here, including the ellipses, the elides in the story. I thought, the movie is a magnificent example of sensitivity towards one self and others. The sets and the street scenes are lavish in their economy, their delicacy. Late Autumn is a movie that grows on you, that needs multiple viewings.
Posted by Kubla Khan at 1:31 pm