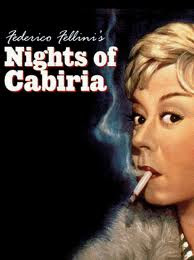 Cabiria has been a prostitute for as long as she remembers. Once she remembers, she had long black hair, it fell to her shoulders, she would go out with her madre, life was different then, she was young. Who can she trust now? She was nearly drowned by her pimp and her money was stolen not long ago, this is her life, exploited by all, pimp or no pimp. It takes a hypnotist to unravel her life, her desires, talk about her madre, her long black hair falling to her shoulders. And now this man, this new man, what does he want? He appears well meaning, brown skinned with black hair, she is afraid but what the hell, Cabiria must try again. As Cabiria walks alone, in the end, desolate and heart broken, robbed off all her money, the new lover just another fraud, another disappointment, she looks at the camera, image of broken hopes and dreams, and some steel too. The smile says it all. The last scene is worth millions.

Fellini's Nights of Cabiria is pre-fantasy Fellini, extremely brutal in his treatment of the themes that were his concern around that time of his film making. The script was co-authored by Pasolini and has some extremely memorable lines, some very memorable scenes. I like Cabiria in the rain, I like Cabiria walking and running, with Chaplin like energy. I adore the last scene. I can watch it endlessly. The last scene is a poem. The performance by Giulietta Masina is phenomenal. She owns the character. She reminds me of Anna Mignani from Mamma Roma, in the certitude of her performance. She exemplifies that performance, that character. She is filled with solitude, she is a solitary person. Her smile hides her solitude, her loneliness. She has always been betrayed, she must live in Rome or thereabouts. Not for her is a family life, a country home, a husband, children. No, Cabiria must live to fulfill that destiny, the fierce solitude of that life.