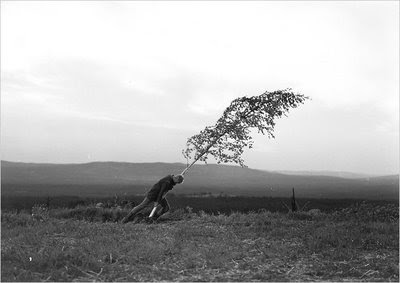 Bergman's Virgin Spring is based on a medieval legend and has spawned a few successful movies itself. Whilst the story essentially details the struggle between good and evil, the master stroke lies in actually hemming in the viewer and obscuring his or her judgment. Objectively looking at what we see is essentially hard here. The movie makes you fill with rage, you want to do something yourself. Is there a clear distinction between pure good and pure evil and do such things exist? Can one be completely good or completely evil? Such are the thoughts it forces on us, such is the essence.

A remote forest setting, a household filled with ascetic Christian folk, a very Christian household. Tore, played by the magnificent Max Von Sydow lives with his wife and daughter Karin. Karin is very young and is shown as the very picture of radiant innocence. In fact, she is innocence itself, and the other occupant is her step-sister who is pregnant out of wedlock, bitter and shamed, she is an outcast within the house but not to Tore and Karin. Karin must go to the nearby church and offer candles and must leave on horseback. She decides to takes ingri with her. The landscape, wild but pure and yet a shot of a crow, hark back to myth and legend and a forboding of things to come? Ingeri worships the Norse deity Odin and whilst preparing food for the day, sandwiches a big frog into a loaf of bread, unaware to Karin. Ingeri is bitter, we can understand, alreday the lines are drawn between Karin and her, Karin the beautiful, the radiant and innocent and ingri the sullied, the sullen.

On their way, a one -eyed man, perhaps a Norse priest and Ingeri wants her to put a spell on three traveling men. Ingri wants a kind of revenge it seems and escapes whilst Karin has left on her own. Soon Karin is stopped by three herdsmen, one of them a very young boy, and in her naive innocence, allows herself to be coaxed in sharing her lunch with them. their designs are evil, why cannot she see that? The viewer squirms, karin is still smiling. and then they brutally rape her and kill her, watched by Karin, a small rock in her hand, crying and suffering and yet paralyzed into inaction. The herdsmen leave Karin, after stripping her of her beautiful dress and take refuge in her own home, where after supplication and dinner, they settle for the night. One of them, in the early hours of the morn, offers to sell Karin's dress to the mother. The mother? A scene of brutal simplicity and then Tore, informed and tortured, decides to take revenge. He kills all three and then suffers more. Later when he discovers Karin's body and lifts her head, a spring gushes out. He vows to build a church there, to redeem them all.
What interests me most after watching this drama is not the story per se but the ingredients besides it. Bergman succeeds in altering the objective perspective. You end up as a partisan. Karin has been sullied and revenge must be swift. But are we right in talking about revenge? Should there be a thing called revenge? What does it achieve? Is it possible to be at peace with one self without and with revenge? There is no doubt about Karin's innocence but is she all pure as opposed to Ingri who too is innocent but impure? What is purity and then what is virginity? Who sets the dominant tone for such matters? And yet a normal emotion of rage and fury will follow such an atrocity. Herein, Bergman shows us this household of pious Christian folk, the wife burning herself with candles, such is her penance. And then, she wants revenge too, as does Tore.

Doesn't he tear down a birch and lash himself with it and ask Ingri to get him a butcher's knife? The most interesting aspects again are the usual Bergman characters, landscape being one. The ominous nature of his settings in general and in this drama in particular add to the sinister events being played. To say that nature alone is pure and indifferent is an extreme view too. In the hands of nature, we are but flies, as flies to wanton boys. The lack of dialogue when Tore kills the men and boy adds to the heightened severity of those scenes. It is as id all primeval urges had gushed and stopped there. The suffering of Tore and his wife is all too evident and the lack of words dulls our objectivity.
I do not personally know how one can behave in such circumstances or how one should. The rule of law is a modern invention, a familiar construct. Justice is as evanescent as those Nordic clouds and as slippery as the tomes of law. Morality or Christian values or any other values cannot actually dissipate the violent anguish of Tore or his wife nor bring back the innocence of Karin or her youth. I do not wish to know what her innocence is and whether she is pure and I cannot say how purely evil those herdsmen were. I cannot safely say that the Norse deity Odin has no powers. All I can suffer with and see is Tore as he tears down the birch, as he lashes himself with its branches, as he cries and suffers and as Karin struts on her horse. All I can think of is Ingeri in her silent suffering. There seme to be no answers.
Posted by Kubla Khan at 5:17 pm

I've just downloaded iStripper, and now I enjoy having the sexiest virtual strippers on my taskbar.