Pauline at the Beach

''Love burns. I want to burn with love."

Eric Rohmer is generally regarded as one of the important names of the French new wave of the sixties. His style makes him quite unique and it has been likened to a novelistic approach towards film making. Rohmer himself declared that he was more interested in thoughts than actions. This is evident right from the beginning of Pauline at the Beach where Pauline, entrusted to her older mature cousin Marion, soon after lodging at their summer seaside bungalow start talking about 'love'. The characters soon start setting the agenda for discussion, for a chat, much like as it happens in ordinary day to day situations. In this as in other Rohmer movies, it is thoughts that instigate words as shown but also the ability to create a space wherein words and thoughts can be shared. In other words, much of Rohmer territory is on the beaches as in here or about people on holidays or on vacations, where they get a chance to talk.

Another feature of his movies is the essentially naturalistic setting. By that one would infer the ordinariness of the scenes shown. The shots are much of those we see naturally in ordinary situations, on the beach, on the streets, inside a house and so on. There is in essence an ordinary routine appearance to what we see which enhances the background tone of talking that seems to be the primary aim. The shots of people casually walking on the streets and stopping and chatting at a normal place is wonderfully shown in Rohmer's movies. The ordinary chatting scenes do not make the movie more realistic immediately but actually enhance the sense of talking. I can see myself as having been part of endless discussions with various people on topics as diverse as faith and life and love and so on. What strikes one in this movie however is the 'return' to a previous established routine, after episodes or episodes have unraveled. In that sense, the opening and closing of the gates at the beginning and the end of this movie signify that very clearly.

Pauline at the Beach is one of Rohmer's six moral tales movies, and the themes are not connected. 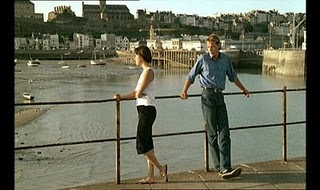 Pauline is young, in fact very young and Marion is older and she thinks she has a better understanding about matters that relate to love. As she declares, she wants to burn in love, with love. She is looking for an instinctual extinction in passion and also believes that that will ultimately lead her to finding the right person. She rejects the advances of an old flame Pierre but succumbs quickly to Henri a stranger that Pierre introduces her to. Marion encourages Pierre to think about Pauline who is already enamoured of a boy of her age. Henri likes every woman he sets his eyes on, he has no fixed abode, he is a traveller and never locks his house for there is nothing to steal from. Pierre wants something permanent with Marion who wants a recognition of her spirit in Henri who desires both Pauline and Marion physically.

Pauline's instincts ultimately are more superior to Marion's and as summer moves on, Pauline becomes more mature. In fact, she never gossips about anyone in their absence in contrast to the the older more mature people around her. Everyone is in an enclosed circle of sorts and in this combination of circles and triangles, feelings and emotions grow and subside. What they think of as love is as passing as the summer, and as summer passes so does their love. Pauline wants 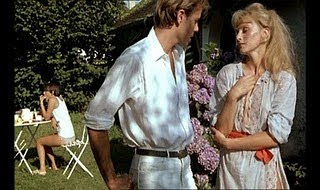 to know a person before she falls in love though she does admit that she had developed something for a stranger she had seen just once, in passing, without them talking to each other. Pauline is not subject to waves of burning but waves of restrained emotion and as her maturity grows, she seems more aware of what others believe about and don't.

What Pierre does not understand is why Marion does not love him but Henri even though Henri is not good for her? Pierre believes that Marion is blind not to see how good a person he is and yet Pierre strangely continues to love Marion even though she rejects him for Henri. Pierre does not think Marion's behaviour is logical and yet Pierre himself does not behave logically. In essence, Pierre thinks that in love, one should make logical choices but he is not making a logical choice himself after having seen Marion's illogical behaviour.

Henri seems a fairly remote and diabolical man as he would not mind sleeping with anyone and yet his theories about love seem better than Pierre's. He rejects Marion's burning in love hypothesis and says that an initial spark must be the spring board for future passion. He rejects Marion as being the symbol of perfection and finds her perfection oppressive. He rejects Marion because she falls too easily for him and as he puts it, “she gave me no time to desire her.”

Throughout the movie, we see all the characters doing the opposite of what they say and sometimes saying things for effect. It is difficult for instance to say someone doesn't mean a thing when they utter things about love or life and so on. It does not mean however that we are lying. Perhaps it means that that is what we believe at that given instant or that one can say things under the oppressive beauty of some one or under the beautiful spell of someone just seen. I have great sympathy for nearly everyone shown in this movie and am much in love with Rohmer's unique vision of being unobtrusive and at a distance from his characters. There is almost a casual approach towards film making that seems to be the case here and yet in essence there is a rawness and an intensity that lies at the heart of things.

Pauline at the Beach seems like a very unassuming movie. However, to assume that would be a mistake. It is a relentless deconstruction of many things, observed with humanity and humour.
Posted by Kubla Khan at 2:36 pm