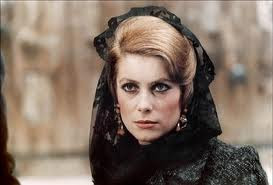 Tristana is a wonderful movie, in that the imagery and surreality of Bunuel's world gushes forth in each image. Tristana is another 'woman' movie in which Bunuel portrays a young woman's fall into poverty, sexual and emotional exploitation, her rebellion, revenge and eventual rehabilitation after many travails and losses. Shot in Spain and in the environs of a walled and picturesque setting, the movie tells the tale of how young Tristana is exploited by her elderly guardian, at first as a protector and then for his sexual needs. The guardian has lapsed into relative poverty and is forced to sell his antique possessions but clings to his old world ways with tremendous determination. He is clearly not a parvenu nor a really lecherous person but is steeped in the world, a world that uses women as part of a sanctioned order
When Tristana goes out into the world and falls in love with Horacio, a young painter, her benefactor cannot accept that. Tristana flees with her lover but eventually returns as she is unwell, with a dangerous infection in her leg, which is eventually amputated. However, for this she must stay with her benefactor, Don Lope, who confesses his real love for her, which Tristana refuses to accept. They get married eventually but she snubs him, and later, at night, when he wants to consummate the wedlock, she refuses and reminds him of his age. Later still, Don Lope is unwell and asks Tristana to fetch a doctor which she pretends to do. In the meanwhile, Don Lope dies.

Tristana is a subdued movie as for as colours are concerned but is shot in the usual 'unreal' Bunuel manner. Played by Catherine Deneuve, Tristana is sadly beautiful and beautifully sad and her expressions, her mannerisms and her body language convey the anguish of exploited women down the ages. Fernando Rey, one of my favourite actors, plays Don Lope with his customary nonchalance and regal ease and later with a certain degree of solemn acceptance of his deeds. Don Lope is quite an interesting character who reveals that all his life he has refused to work for money and denounces any merit in such a thing for why should he work so that others get rich? In his demeanour, his manners and his behaviour, there is no sign of debauchery but that in reality is the sign of such a gentleman, who carries on his activities without sensitivity or insight.

The household of Don Lope has interesting characters too, and his housekeeper's very young son, who is uninterested in any kind of meaningful activity, is clearly bewitched by Tristana. In a scene where Tristana asserts her freedom, she bares her bosom to this young chap, in an act that she sees as her reassertion of those rights that had not been available to her before. The calm manner in which male hypocrisy sanctions her subdued existence, and the way the two men, one out of love and the other out of his own selfish ends continue to set the tone of her life is shown in sharp relief against a backdrop of the hieracrhical nature of such dominant modes of intercourse. Towards the end, Tristana is determined when she refuses to save her 'husband', who, now rich again after having inherited his estate, passes it on to her. Tristana is now rich and one hopes will find some solace with Horacio, though that is not shown.

Bunuel shows a lot of his characteristic fetishistic shots, especially the leg 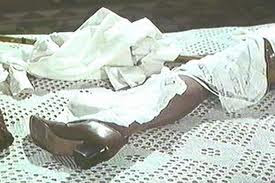 shots and the prosthesis for Tristana's leg, which in one shot is adorned, lying on her bed with her inner garments. Then there are the dream sequences, which are so unnervingly extravagant with imagination. Deneuve plays her role with ease and grace, the aloof beauty, the melancholic young woman but the main performance is still Fernando Rey's, Bunuel's lead actor in all his later movies, who in spite of not exciting the viewer's sympathies, carries on with a melancholic gesture of accepting not only his material fall but also his emotional fall from grace. Rey was a consummate actor, a great actor and one never gets the feeling that he actually acts but as of someone who has naturally inherited that role. Tristana the movie shows Bunuel attacking the bourgeoisie values and concepts that he brilliantly attacked all his life and in showing with beauty and skill, the unending crime of accepting hypocrisy, be it social or religious.
Posted by Kubla Khan at 1:39 pm

Here is my weblog ミュウミュウ アウトレット

Look into my homepage: コーチ