Why does Oharu faint? 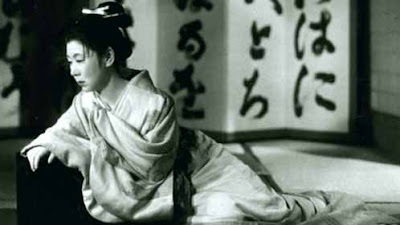 Oharu faints thrice in The life of Oharu, and on all occasions, wakes up feeling kinder and more forgiving. In an influential essay on this movie by Robert Cohen called "Why Does Oharu Faint? Mizoguchi’s The Life of Oharu and Patriarchal Discourse", Cohen says that Oharu's spiritual transcendence is gained after "she abandons her gender identity and sexuality", and in a sense, her victory is only pyrrhic. However, personally, I find that it goes against the standard narrative that Mizoguchi employs throughout the movie, but on the whole, I agree with what Cohen says. I think what Cohen says about abandoning her identity and sexuality is far more interesting and appealing than any spiritual excuse that could account for how Oharu has become a saintly character and her fainting spell at the beginning and in the end is more a physical and psychological surrendur to the awful life that she has lead till then.

Oharu has the kind of life that is brutal in systematically making a nonentity out of her; from a courtesan to being loved, from a woman abused to a degree of safety as a wedded woman and then eventual fall from position and grace when she is sold as a prostitute, Oharu goes through the umpteenth time what is basically a rotten life for her. There is resistance from Oharu but in that world, it can only be token. As a concubine to give the Lord Matsudaira his heir and later as a prostitute, Oharu fulfils a certain destiny that women have had to bear in all ages and in all cultures. Oharu walks a languid walk in the beginning of this movie and sitting in a temple, she visualizes her former true lover. Oharu can only fall into reverie, for only by re-living can she actualize a world that is permanently lost.

The rest of Oharu's life is a progressive narration of one injustice after another, but only through her reveries and flashbacks can Oharu gain a certain spiritual meaning. I however, do not subscribe to any notion of spiritual largess gained through physical or emotional suffering. Oharu's sufferings are neither mild nor subtle; Oharu carries on in spite of all the sufferings that she must suffer. That Oharu's experiences can be described through expressions like transcendence makes a mockery out of all her experiences.

All of Oharu's sufferings can be seen against a background of social, cultural and political realities of her times and in essence they can also be used as justifications of her sufferings. Oharu is a mother and yet not considered so, she wanted to marry for love and saw her lover beheaded and the only place that can salvage whatever is left untouched inside her is a Buddhist temple. It is in the symbolic realm of a religious sanctuary that all Oharu has lost comes back to her. All other places, be it a street or her parent's house, be it a monastery or a field have only reduced her to a person to be used or mocked at.

Oharu's fainting spells must be seen as an unknown impulse within her to resolve the conflicts that she cannot resolve practically. When she meets her lover, she faints as she is frightened of his advances and in that fainting spell, there is an element of hysteria, I think. In purely psychological terms, this behaviour, whilst hysterical, is still unknown to the actor and can have diverse causes from which it arises.

Taking again from Cohen, a de-sexualization and loss of gender will ultimately allow Oharu to devictimize herself and come to terms with her state. By mixing a certain eclectic mysticism with her subjectivity, Oharu can gain that recognition that has eluded her all her life.
From a purely Foucauldian perspective, Oharu has become what Oharu has subjectivized within herself, for her to be Oharu, she must have the life of Oharu. Or, for Oharu to gain a certain transcendence, a certain experience must precede it. That religious imagery is used to give her a semblance of person- hood is a significant step towards her restoration as a person, for without any exaggeration, any nostalgia for those past times is purely a delusional pastime, for essence, person-hood did not exist during Oharu's times.

Since Mizoguchi is considered as a feminist, and since his treatment of such themes is regarded as sympathetic, it is only with a certain brutality that he can show how earnest we must become to prevent such misery to unfold to another Oharu. However, in so-called modern times, women in wars and in times of so-called peace have been used as objects; in relative peaceful times women have been used as objects within the war zones of domestic lives. Hence, from a perspective that essentially combines peaceful doctrines with Buddhist meditation overtures, Oharu can gain through a rejection of her personal memories and later through a complete disavowal of her gender and sexuality a peaceful 'transcendence' that she could not find in her earlier life, when she was a woman.
Posted by Kubla Khan at 11:53 am