Who are these Bolano heroes?

Who are these Bolano heroes, his protagonists who roam from place to place, in search of an elusive entity called literature or poetry? And where does this literature actually stay or reside in their lives? Mostly, his wandering modern mendicants are dope addicts, clumsy after having their clumsy hopes dashed to pieces. From one love torn asunder to another fruitless passion, one person after another starts picking up the staggering piece of his or her life only to see it being disordered again. True, their love for poetry put aside, their very lives are quite unpoetical, disordered and junky, fuelled by egalitarian day dreams, unrich, unwise, waste.

But are they not truly emblematic of what literature should actually encompass and stand for? I w'd rather see a writer who struggles with his contradictions than see an established literary seer churn one tome after another and in the spiralling doom of the times, become an establishment figure, looked up to for more valueless lines or disjointed thoughts. An effervescent writer must not spark always but show us the full essence of the whimpering pathos of his art for only in failure does true creativity reach fever pitch. However, with their lecture tours and printed editions, with endless reviews and critical acclaim, the fault lines expand and widen the gulf between the source and the receiver, till with the passage of time, their accumulated works assume the finality of myth.

Bolano's heroes are not to be searched for in an opium den in a Latin American banana republic alone. His heroes are not mythical but made of real flesh and blood for their very caprices and selfish loves and needless hates and bad writing and literary loves are our own too. They belong not to some pantheon of exalted Sisyphean or Ulyssean club but to the crumbling literature of our modern cities and towns, crumbling because their voices are not actually captured in their true colours. The death of the hero is not the objective nor his salvation through his passing through a painful purgatory. His or her passage is through the crumbling edifice of life itself and his or her literary passions and occasionally deluded love of writing or writers passes through the self aware passage of his own literary mortality, build up on the countless ghosts of self aware seers of the present age.

The Savage Detectives of Bolano are the true literary inheritors of the present times for they have come to terms with the reality of literary failure, the inability, in its true essence to have true literature at present. Literature is not only about writing a few great lines or churn metaphysical melancholy nor is it just to highlight a few political inequalities. It must ultimately re-establish with the average reader and the potential reader the ferment of the air, which is only possible if the main tragedians are not true tragedians but unwilling sacrificial tools. For the unharmonious exit of most Bolano heroes from our pages and their unwelcome entries are as dull and spectacularly brief as the average life around us is. For the hero who dumps the blond girl nearing her pregnancy with an odd few lines or the travelling poets who search for some savage utopia in some savage desert or another modern wasteland are the symbols of our post-capitalist literary times.

Since love is an impossibility and poetry is all together impossible and a great novel is not possible too, the reader must make sense of his or her world through these half crazed literary lunatics, who in previously lived half lives in poor quarters of various cities, where they had written elegies and odes and ditties and ballads and love songs have in the final climactic crazed moments of their lives only succeeded in making an elegy of their own lives. Their success is only in their failure, failure because in these times literature is just a paltry tool to express nothing and success because their lives have culminated at the edges of faraway towns, in isolated beaches where bloated bodies have washed ashore, in city morgues where unidentified bodies lie unclaimed, in certain universities where some, who got lucky have survived and are reconciled to a post love post literary existence.
Posted by Kubla Khan at 7:04 pm 1 comment:

Maybe I should have written my first post about Lorca, for when one considers poetry as a substitute for everything else, and elegy as the first and last word, then one must begin with Lorca, poet of elegies, sadness, melancholy, and beauty. In Lorca's poetry are embedded images, wine, sorrow, drowsiness, breathlessness, heartache, pain, numbness and sadness, melancholy and desire.

Lorca is the quintessential poet of celebrating the art of evoking abscence, the dead poet, silence, loss, tragedy. His poetry celebrates the inability to express our longings, for the poet too can struggle to do so, even if the poet is Lorca. In the excellent introduction to Lorca's poems in the penguin edition, Lorca is described rightly as the poet of desire. All his poems are driven by longing, from humans to the animal world, by longing and want.

Lorca's life and some important events are well known. Born in Spain in 1898, Lorca's family moved from Andalusia to Granada and then he moved to Madrid. He was always attached to the country side however. In Madrid, Lorca read many leading poets and writers, and showed a deep attachment to music too. He formed a very close friendship with Salvador Dali and Luis Bunuel and he would spend time at Dali's home in Catalonia. He was quite close to Dali, and celebrated it in his ode to Salvador Dali. By 1927, Lorca had written and published substantial amounts of poetry and drama. In 1928, the publication of Gypsy Ballads brought him success and fame but also failure in his personal life as a lover.

Lorca spent a year in the USA and published his most difficult poems as Poet in New York afterwards. Returning to Spain, Lorca published his great dramas and poetry but in the Spanish war of 1936, Lorca knew that he was falling foul of Franco's regime. Lorca was murdered and his work banned. The reasons could be his criticism of fascism, Catholicism and monarchism. Lorca had written earlier that nobody shoots poets but was tragically wrong in this instance.

Lorca is the poet of the dark night, of dark nights that are born of many dark nights. He celebrates elegies, he revels in elegies, all his poems are elegies, his celebrations of love or nature or whatever he choose to describe are relentless odes to the lost, the forever lost. Lorca is the quintessential poet of loss. It is understandable how Lorca might be an emblem for those in exile or those who think they are in exile. Thus he is the exile' saviour, the patron saint of exile. In Lorca's poetry, gloom and doom are not only to be sought after, they must be lived through, for in that very elusive hour when poetry is born and the dust of time drops off our mortal order, poets like Lorca shine the light of sorrow on us. Only this sorrow is more like joy.

There are too many poems of Lorca's that can be mentioned but his Ghazals, Ballads, The Faithless Wife and his Lament for Ignacio Sanchez Mejias are simply magnificent. "Great art", wrote Lorca, "is only possible when the creator is acutely aware of death". He called it the duende. The duende is born of death, its contemplation, its wounds. It, as his critics tell us, is an awareness of death. And in this awareness alone, true elegies are written.
Posted by Kubla Khan at 6:38 pm No comments: 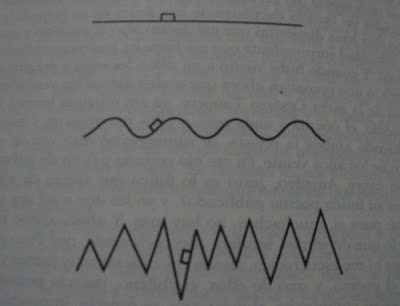 This is a Poem from Roberto Bolano's The Savage Detectives, written therein by the elusive Cesarea Tinajero.
Posted by Kubla Khan at 6:00 pm 1 comment:

An episode in the life of a Landscape Painter

Cesar Aira's An episode in the life of a landscape painter is a short novella and written in a maverick and distinctive tone, in a way that leaves it open and shut, for in the end, the ending is too open, open to further interpretations or occasionally lack of and the reader, much like the landscape of this novel, is held in the grasp of the indecipherable moment, the real moment of reckoning, of illumination.

Based loosely on the historical events of the German landscape painter Johann Moritz Rugendas and his companion Krause, it focuses on one important event in Rugendas' life, when in the Argentinian pampas painting landscapes, he is struck multiple times by lightning. This leaves Rugendas physically incapacitated, prone to sudden and crippling headaches. the ensuing effects also leave him scarred facially for life, a turn of events that make him occasionally wear a mantle to prevent people from noticing his deformity. The end point is reached when Rugendas, against the better judgement of his friend Krause, spends all his energies in painting an Indian attack on a white settlement. The resulting escapades are physically tiresome and much revealing, leaving both friends in amazement and occasional wonder.

This novella lays out a certain claim on historiography with Rugendas aiming to establish a factual history of what he sees and subsequently paints. He attempts to explore what Rugendas' mentor Humboldt calls the physiognomy of painting and in this process, to allow the facts he paints to tell a distinctive story, based on the unbiased testimony of the witnessed movements of time. This work thus aims to tell us about the representative aspects of history and the subsequent motives, rather than just pure representation. In style, Aira has his own calling and to the simplistic style of his prose he adds a much more stylistically simple touch, a bit of old world writing charm and a hint of magic.

Rugendas has more ambition than health and more guts than any other person in his position. In waiting for that culminating moment of his life, a point that he has suffered in his mind, Rugendas shows an artistic yearning for annihilation. Since the end is too open, the ultimate test is inconclusive. But the effort is all there. In his short preface to this novel, Roberto Bolano calls Aira as "a writer who defies classification, one who is a nun or novice among the discalced Carmelites of the word. Aira is an eccentric writer but also one among the best".

Aira is a prolific novelist and his How I became a nun is available in English too. A good introduction at complete review. All in all, a very satisfying read after the witnessed words of India.
Posted by Kubla Khan at 4:25 pm No comments:

Autumn
those that know what burning is
when leaves fall, some leaves
when these leaves burn
leaving everything cold
and useless

those who know silence
not the silence of and after midnight
but daytime silence, ritual silence
silence of life, a house folded on itself
in silence
where dust settles silently too on open spaces

those who know what burns
the burning of dry leaves, those that were wet once
having soaked in memories along their veins
and now burn shamelessly
in silence
in front and behind of those who know silence

it ends only in burning
not in the consummation of silence
but in its dread, with its violence
not the silence of night but mid morning
and late afternoon and this burning in silence
and this is also called life
Posted by Kubla Khan at 6:15 pm 2 comments: