— Galaxies of love are appearing in the palms of our hands
— Poets, let down your hair (if you have any)
— Burn your nonsense and start loving until you come up with priceless poems
— We don’t want kinetic paintings but enormous kinetic sunsets
— Horses running 500 kilometers an hour
— Squirrels of fire hopping through trees of fire
— A bet to see who blinks first, between the nerve and the sleeping pill.

— The death of the swan, the swan song, the last song of the black swan, IS NOT in the Bolshoi but in the intolerable pain and beauty of the streets.
— A rainbow that starts in a grindhouse theater and ends in a factory on strike.
— May amnesia never kiss us on the mouth. May it never kiss us.
— We dreamed of utopia and woke up screaming.
— A poor lonely cowboy that comes back home, what a wonder

Maristain: Have you burned your skin with a cigarette?

M: Have you ever carved the name of your beloved in the trunk of a tree?

B: I have committed greater abuses, but let's draw the veil at that.

M: Have you seen the most beautiful woman in the world?

B: Yes, sometime around 1984 when I worked at a store. The store was empty and in came a Hindu woman. She looked like a princess and well could have been one. She bought some hanging costume jewelry from me. I was at the point of fainting. She had copper skin, long red hair, and the rest of her was perfect. A timeless beauty. When I had to charge her, I felt embarrassed. As if saying she understood and not to worry, she smiled at me. Then she disappeared and I have never again seen anyone like her. Sometimes I get the impression that she was the goddess Kali, the patron saint of thieves and goldsmiths, except that Kali was also the goddess of murderers, and this Hindu woman was not only the most beautiful woman on earth, but she also seemed to be a good person.....very sweet and considerate.

M: What is your favourite soccer team?

B: None right now. The ones who fall to second tier, then third consecutively, then regional until they've disappeared. The phantom teams.

M: Which historical character would you have liked to resemble?

M: Did you fall in love with older neighbours when you were young?

from Roberto Bolano The Last Interview, Interviewed by Monica Maristain
Posted by Kubla Khan at 4:51 pm No comments:

Her feet were blotched red, as if covered with blisters, standing on the blazing tiles of a hot courtyard, in July, under a blazing sun, her barefeet had survived the ardour of her passion, as she had stood barefoot, calling him from the courtyard of their immigrant passion. He had seen his hands covered with the after scent of crushed roses, all perfume was his. The steel of agitated hooves and the clamour of other lives could not drown the lucky star of his lucky heart. Love begins with claiming the lovers' feet first, he told her, as he looked at the sky's azure and her brown hair. Thoughts like currents passed from one to the other as they felt as one, without need for caress or touch.

Her flaming lemon top burnt in the hot July sun, yet her forehead was clean, without a drop of sweat, as they looked at the glittering concrete of the car park, three steps away from closure and oblivion. He looked away from the faraway look her eyes would surely seize soon, both waiting for some incident or accident, praying to the moody godheads of sudden destruction. A rhythm and blue number, equally detested by both, played on a nearby radio, as some stray memory of her from earlier times, which he had then resolved to forget completely, struck him like a stone dropping in a silent well. The sun kept blazing though he felt suddenly so cold.
Posted by Kubla Khan at 11:03 am 2 comments:

She said she loved busy days. I looked at the sky. “Busy days”, as well as clouds and cats that slipped away between the bushes. Those flowers that I left in the field are my proof of love for you. Later I came back with a net to look for butterflies. The girl said: “disaster”, “horses”, “rockets” and patted me on the back. Her back spoke. Like crickets squealing in the afternoons of lonely villas. I closed my eyes, breaks squealed and the police quickly got out of their cars. “Don’t stop looking out the window.” Without speaking two of them reached the door and said “police”, the rest I could hardly hear. I closed my eyes, the boys died on the beach. Bodies full of holes. There’s something obscene in all of this, said the nurse when no one was listening. “Busy days, I looked at the sky, cats”, surely I won’t return to the open air, not with flowers, not with a net, nor with a damned book to pass the afternoon. The mouth opened but the author couldn’t hear anything. He thought in silence and later thought “it doesn’t exist”, “horses”, “a waning moon in August”. Cast in black. Someone applauded from the void. I suppose this is happiness.

Roberto Bolano, Tr. Tim Pilcher
Posted by Kubla Khan at 11:35 am No comments:

There is one scene in Andrzej Wajda'a Innocent Sorcerers that is the movie in itself. It has everything that a cinema struck can ask for: beauty, words, imagery, poetry, timelessness, sadness, energy, pathos and high drama. It runs well near fifty minutes and takes place in the shabby apartment of a young doctor with peroxidized hair in post-war Warsaw in the early hours of one night. The young man called Basil has decided to help a friend 'tame' a charming young woman they have seen in a music bar and due to some confusion ends up with her. She, who later introduces herself as Pelagia, surprises him by accepting his invitation to his place. What follows is a marvellous scene of such intense wryness, humour, tragedy, drama and cynicism that it encapsultaes everything that can be commented in a politico-social sense about any society in transition.

Pelagia begins by teasing the man and both agree that they should proceed to engage in a sentimental plan with each other according to certain written rules, which he writes down and sticks with a knife to the wall. The rules of engagement aim at introduction, intelligent conversation, followed by a kiss, by perhaps a physical union but within degrees of freedom. If Basil thinks he is clever, Pelagia is cleverer as each aim to out do the other. In conversations that skirt on various issues, from the frailty of human knowledge to human ignorance, the two engage in verbal sparring. Basil then invites her to a game of playing with a match box and scoring on what end it falls on; they bet on taking their clothes off, one thing after the other, at each wrong call. Initially, Pelagia starts to win but later Basil wins more. During these attempts, the conversation is sparkling and flirtatious, tender and tendentious, awkward and soulful, romantic, beautiful and occasionally tense. Each is testing the other and yet each is cynical and unsure not to admit something really tender.

Later as Basil makes her scrambled eggs and later still when Basil is called out by his friends for a few minutes, on returning he finds his flat empty. Basil rushes out looking around the city for her but cannot find her at all. On returning he finds her in his flat and he appears much relieved though he does not show it. Pelagia leaves after a while but after shutting the door, stops and returns to Basil again. 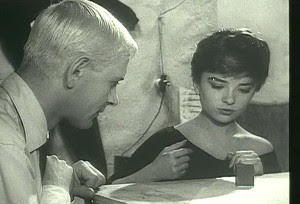 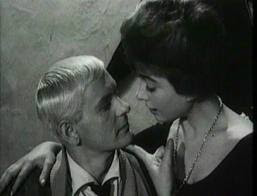 I thought the long scene is a mood scene, a scene that proves time and again the revivifying nature of cinema, its poetic element, its drama. The conversation between the two is beautiful poetry and at the same time, it represents a particular mood, not only for Basil but Pelagia too. I am not sure whether Pelagia is her real name; in the climate of the country that it shows, cynicism reigns supreme. In only that sense is it political, for the city scenes show the city in ruins and yet there is a gay hedonism at work here. A certain gayness pervades the spirit of the times in which these young men and women move or work. This is evident also in the almost lazy way that Basil keeps rejecting the advances of good looking females earlier in the movie. However, in a war sapped place, perhaps there is no place for tenderness or perhaps tenderness is replaced by a boxing match, as takes place in Basil's flat.

The movie has a wonderful background jazz score, which in a sense compliments the gayness of spirit of these young men who certainly seem to have no morals. Yet, in the scene between Basil and Pelagia, and in all cinema I will list this scene very high, the talk is of love and morals. A certain tenderness is missing, a certain cynicism has set in, war has taken away something after all. Both are lonely, though to his loneliness she remarks that she is ambitious. And when he finds that she has left him, he runs frantically in a mix of dazed pain and confused regret. He may after all have found the one he was looking for, she too may have found the one she wanted inspite of her ambitions. Such sentimental plans must be tried occasionally.
Posted by Kubla Khan at 2:24 pm 2 comments: