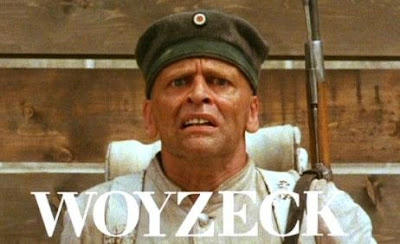 If we decide to pass a judgement on Woyzeck ( that is if we have a right to ), we can only do so from an external point of view, from the outside, for he is not accessible, even to his doctor, who thinks he is too philosophical. Either Woyzeck is sane and his experiences quite normal, though slightly out of the ordinary, may be mystical or else he is deranged, with a fixed idea, suffering as his doctor is quite sure with "aberratio partialis mentalis" and thus foreign to us. The case of Woyzeck is a curious one, the movie is quite brilliant and the play by Buchner simply one of the best in any language permitted.

Woyzeck, a soldier and husband, father and a crazed man is aloof, estranged and at a distance from everyone. His officer observes that Woyzeck has a "hunted look" always and advises him to "pace" life. But Woyzeck is a troubled man, given in to visions, hearing voices, having premonitions and harbouring strange ideas. He is thus being treated, with a diet of peas only, to be followed by mutton. And when Woyzeck is told of his wife's infidelity, and he spies and sees her with a Superior officer, Woyzeck hears voices again, commanding him to commit the ultimate offence, to kill his wife. That he does and ends with blood on his hands, throwing the knife into a pool of water, mad with rage and grief.

Woyzeck is a strange man but is he actually mad? Should we be sympathetic towards him for we know that his wife is unfaithful to him? However that is not enough for him to kill someone, even if it is a crime of passion, even if such crimes are prepared in inaccessible regions of the heart. Woyzeck is betrayed but isn't he already at a distance from his wife, from his surroundings? Isn't Woyzeck not fit to be in the company of drum-majors and pseudo-scientists, on a treatment regime of peas? Should not Woyzeck be called a misfit if not a real philosopher, isn't he a thinking man and thus condemned?

Woyzeck's visions and reflections are unintelligible, his language allusive and his actions cryptic. He claims that "flames are raging through the heavens" and he can hear "a distant roar like mighty trumpets", he talks of nature and claims that "when the sun is high up, the world is bursting into flames and that it is all in the mushrooms". And he is in hell, he feels it, a hell that we don't know of. "Everything is going round in circles", he says. In short, he "feels hot". Thus Woyzeck and his experiences can be understood only if we make an effort but in the end the murder, the act of passion creates a wedge. He is quick to recognize that, shouting at the people who might think so, calling them murderers too, questioning their hypocrisy.
Is he an existential hero or a plain murderer, a rejected lover or a deceived man, a poet, a philosopher or is he only ill, hiding behind the moon and poetic expressions, an interesting psychological case, one who would interest modern forensic experts? I cannot decide.

Woyzeck, the play by Buchner is fragmentary but in whatever shape it is, it is a stroke of genius, written in a language that suits theatre adaptation admirably and thus makes it such a drama. And the movie, another collaboration between Kinski and Herzog is Kinski's tour de force, a performance that elevates acting to sublime arts. Herzog thinks that any English translation is at best watery but it will do for us. Kinski and the absolute fidelity between the play and the movie makes it a sincere adaptation and shows Herzog's admiration towards Buchner. In whatever order Woyzeck is watched or read, it remains a piece of art that defies time and space.Since I read the play last year and watched the movie only recently, I must admit that I thought I was reading it again. A great movie and a great play.
Posted by Kubla Khan at 7:18 pm

The opening of Herzog's Woyzeck was one of the best openings of any movie! Kinski was perfect for this role. I was part of a production where the director used shadow and life size puppets to interpret this play. It was an interesting experience -- I was one of the shadow puppets. Here are some .

That looks interesting. The first scene of the play is somewhere later on in the movie but apart from that, the production is faithful.
it is such a playable play, isn't it?

actually they did make a study of him and it was one of the first cases in which doctors did research whether people could be held accountable for their crimes. The medical statements is quite interesting, detailed and long, the first held him accountable, the second too, but with retrenchments. Also, such a thing on Lenz exists too, by Oberlin who was a priest and took care of Lenz for a while. I wouldn't put too much emphasis on that his wife did cheat on him. Herzog is right with his assumption that every translation only can be watery - there are very many versions of the play in the first place and the order is disputed as well, also Buechner allows his characters to speak in dialects, colloquial language. The pea diet is not because of his insanity, but he earns money with this, an early critique of medical practices by Buechner, the physician doesn't understand Woyzeck at all, only uses him for his experiments. All pitted by Buechner against domination of nature and the aesthetical letters of Schiller and so on...

Antonia thanks....thats useful. it seems the idea of criminal insanity in germany predated that in England, where Mcnaughten's rule came into being much later.
Perhaps Lenz continues on from where Woyzeck is left off, though i am not sure which predated. i was not sure about the peas.
Lenz is just written superbly.

The peas part is actually a critique of the reductionist science which turns human beings into chemical-mechanical automatons. The doctor character is an extreme caricature and his speeches and diagnosis are clearly parodies. It is to this and to the military that Woyzeck rebels through his hallucinations which to us and to people around him comes as something irrational and ravings of a lunatic. Those ideologies and power structures are denying him his own humanity and it all ends in a tragedy.

Haven't been able to catch up with your posts or able to comment on them recently. Will do when I have more time...

Thanks Alok....there is much sense in your observations.yes, the doctor certainly is parodied and Woyzeck is far intelligent than his colleagues etc

but that's just the one big flaw of this film, the Woyzeck in the play he is not intelligent, he's not a martyr, he is dumb and can't articulate himself. He doesn;t see the doctors and so on through, he knows something is wrong, but lacks the intelectual capacities to get a grip on it. that's clear from the text. he is just some unlucky not so bright fellow with not many good things in his life and the flaw is that Kinski cannot play someone numb. He's far to acutely insightful to play someone clueless & also helpless like Woyzeck.

Antonia....you might be right about his being clueless, not being able to articulate etc but isn't he bright with fever?
fever of an inner kind.....one that makes you an inner martyr?

it is such a playable play, isn't it?

Oh, ya. The choppy, unfinished text, you really can get creative with puppets and what not.