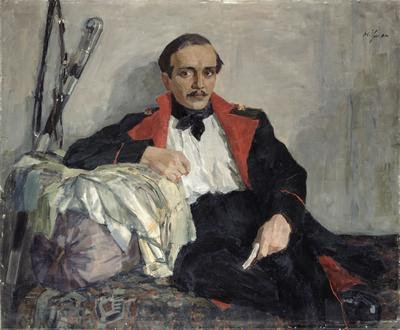 So declares Pechorin at the end of Lermontov's small masterpiece A Hero of Our Time. Written much before Turgenev's superfluous men came on the Russian stage, this novel is a testimony to Lermontov's great talent, though it is his only completed novel. Lermontov's reputation as a poet was safe while he was alive and during his time he was considered next only to Pushkin. In fact, he wrote a great elegy on Pushkin, resulting in his being punished by demotion to a military detachment of lesser standing and transfer to the Caucasus. A hero of our time is based on the exploits of our so-called hero in the caucasus, in areas in Chechnya and Daghestan and in many ways, this novel is semi-autobiographical, containing details from the author's own life.

This novel appeared in a serialized form and as a novel during Lermontov's short life and brings to the fore a character quite complex and interesting. Even though Pechorin types started appearing in Turgenev's fiction later and also Tolstoy's much later, Pechorin is not simply a superfluous man and cannot be dismissed only as such. His character and personality are richer, his thoughts more complex than a regular superfluous man. He is given in to more introspection than usual and even though he remains a man of action, he still comes across as uncertain and indecisive, half interested in everything and loaded with contradictions. This personal tendency, this prey to contradictions forms an important aspect of the narrative of his life. He is prone to philosophizing but also dismisses it quickly. He demands to be respected and loved and is easily dismissive of others. He wants power, he tells us so, he knows that ambition leads only to power and yet, in one stroke, very near acquiring that, he throws any such opportunity to acquire power or status.

Pechorin looks rebellious but is not, he is argumentative yet mild in manner, he is lazy but willing to act. This is evidenced by the duel he is forced to accept and after the initial reluctance is over, he executes it according to a well made plan. He shows no pity for the man he ends harming and yet, he appears to be so kind before that. Pechorin however reveals an evil streak when it comes to winning and breaking hearts, throwing them asunder, toying with impressionable girls and young princesses with title and ambition against the sheer beauty of a Caucasian countryside. The Pechorin type is more poetic than appears on first evidence and yet more ruthless than evident. He scoffs at the concept of fate and pre-destination and yet is quite independent in mind and thoughts and action.

The novel is written in four parts, each seemingly unrelated to each other and yet part of a cohesive whole, with a style of narration and self deprecating wit that was far ahead of its time. The novel abounds in nature descriptions, adventurous and funny anecdotes and a psychological analysis at various human situations including places and people. The attempt by the Russians to subdue the native Caucasians forms the untold narrative of the text. Lermontov does not go into the details of the local political situation and it seems justifiable, as the story is not that of the murderous Asiatics, as one character says, but that of Pechorin. Pechorin is in these parts only because he is fated to and yet prepared to end up in a hostile place. Lermontov's considerations or sympathies are not Asian but Russian and in realizing this character, as he explains in his preface, he is attempting a certain critique of the social situation in Russia of those times. As Lermontov says, this book is not about one person but those of the vices of a generation.

In spite of its brevity, this novel raises aesthetic, political, psychological and realistic questions than do far heavier novels. It is essential to remember that the mood here is practical, post-romantic and fatalistic and superfluous.
Posted by Kubla Khan at 8:56 pm