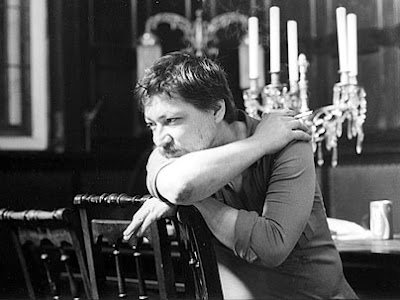 For the Fassbinder struck, any addition to the canon is valuable. This may be interviews on DVD or a newly published biography. Wallace Steadman Watson's Understanding Fassbinder: Film as public and private art is one such work. I know it is a mistake but I make it here: I compared this work to Elsaesser's work on Fassbinder which I must admit, I like more. Perhaps, Elsaesser's work has a more in depth sociological perspective into the environment of post war Germany which sets the tone for a lot of his work. There is a more versatile analysis of the movies which is lacking to some extent in this book. That however, should in no way detract from the merits of this book.

Watson charts the course of well, what was a stormy affair of a life, Fassbinder's birth, the early events of his childhood and the influence of Sirk on the Fassbinder way of making movies. That Sirkean melodrama was an influential factor on Fassbinder in now too well recognized; that melodrama was not unknown as such to Fassbinder is not well known. Watson devotes a well written chapter to the Women's pictures, including a documented analysis of Effi Briest, Petra von Kant and Martha. Fassbinder's troubled relationship with his mother is discussed too but not in a detailed manner, much is left for us to imagine. And his relationship with his stepdad, the liberal journalist Wolff Eder is discussed too. This person was to play a crucial part in Fassbinder's understanding of the problem of history in modern Germany, including the ideology of repression which gained ground after the second war. The women's pictures discussed here include Veronica Voss, Lola and Maria Braun. I have in my previous posts written about Fassbinder's anger-love hate relationship with Hanna Schygulla, which is briefly mentioned.

For me personally, the few pages devoted to In a Year of 13 Moons is the highlight of this book, for it narrates the development of what is Fassbinder's bleakest, most compelling, most powerful and the most polyphonic narrative within the movie genre. There are sections devoted to Berlin Alexanderplatz of course, and his scripts, and his hates and friendships and loves and wars and so on. Altogether, it is a decidedly good read and a good introduction to the Fassbinderless.

Much of what Fassbinder did was political, I think and some of it seems pure melancholic left wing despair. In his case, art comes out of crisis and defiance. Thus, Fassbinder wants to stay out of power and fight against authority. His self imposed exile must be seen in this light. He liked melodrama, Hollywood and its vanities. He also liked to show how it is. It is the recognition of aggression that was his genius, even very low aggression. Thus, all he does in one way or another is show how aggressive we generally are. And violent.
Posted by Kubla Khan at 7:07 pm