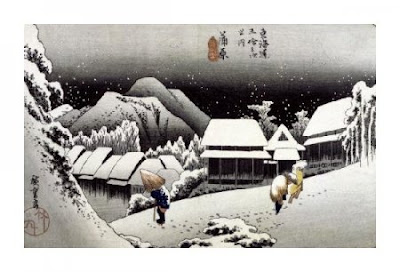 "The train came out of the long tunnel into the snow country. The earth lay white under the night sky. The train pulled up at a signal stop".

This being the beginning of Kawabata Yasunari's Snow Country, I read the above lines quite a few times, the magic of these lines was quite overwhelming. This was snow country, everything was cold, the sensualist called Shimamura had arrived by train, we were hemmed in by mountains, romance would follow, followed by love, tragedy, death I thought. This was my sort of country, I thought. However, after reading the novel, a strange kind of emptiness seized me, as if I had just missed that train myself. I tried my best to be a party inside the desolate coldness of this country and yet this romance eluded me. Kawabata's celebrated novel, which the translator claims to be his masterpiece, has I am sure the excellent qualities that has made it famous and yet, surprisingly, it evoked in me neither mood nor misery. Shimamura and Komako's romance seemed quite watery to me. And of course, Shimamura is a sensualist, and Komako is the one who is in love and yet I could not bring myself in any sort of proximity to the characters.

The first part of the novel seemed to drag heavily for me, the second part had some qualities of mood. The descriptions of landscape in relation to the characters and the descriptions of the characters in relation to the landscape are beautifully done, as if the two are commingled in some kind of way. Yet, the understated subtleness still eluded me. Towards the end, I was blaming the translation or the translator, and yet I am sure the translator has done a fine job. There is something about Snow Country that I did not seem to let me affect. I cannot say that it is Kawabata's style for there are elements of it that appealed to me. The beginning was extremely Haiku style, each line a poem in itself. I did not warm to Shimamura and even Komako, who in spite of her tragic destiny seemed remote to me. It was Yoko, in life and on the last page, who realized a certain dramatic and tragic sensibility for me.

The problems of approaching Snow Country are mutliple. I am not that familiar with Japanese aesthetics, nor the foundational aspects of Zen Buddhist traditions, which form perhaps the core of Kawabata country. In essence, this kind of style evokes a dissonance from the unacquainted reader. Whether it be tea-ceremony or flower arrangements, the melancholy of autumn or maple leaves in a train of silence, it is the ability to get inside that aesthetic scenario and then, regardless of outcome, look at the world from that perspective. Therefore, were I aware to be aware of such an approach and am I ultimately responsible from the detachment of this prose? If Shimamura carries something of Kawabata, then I stand apart from that country and yet, in Yoko, there is someone I can understand. Shimamura is a fine man, I don't doubt it, he has a wife in Tokyo, a geisha in Snow country, likes Yoko too, that too I must accommodate but I don't warm to Shimamura.

In the first movement on the train, Shimamura does not look at Yoko but on her reflection in the train window, thus keeping himself at a distance from that face and arousing in himself an aesthetic distance. If the attempt is to resolve some kind of a spiritual crisis and pass on a certain Zen stage through his requited and unrequited passions, then, as I said earlier, a reader like me must visit many things before visiting snow country. It is my resolve to read Snow Country again, to draw from it the mystery and magic that the first three lines promised and the rest decided to conceal. The fault is however, entirely mine.
Posted by Kubla Khan at 1:50 pm

but see, you expressed my feelings, exactly my feelings, i have been harbouring these vague feelings of discontent after finishing the novel and never could quite put the finger on them. for him, his masterpieces are definitely others, especially that breathtaking story House of the Sleeping Beauties.
yet you talk about the opening of the book, and again i have to agree, especially the scene with Shimamura looking at the girl's reflection in the train window, that particular passage simply killed me.

(it's been slowly raining here, for so long, one of these days will find me write long-overdue letters...)

Thanks Roxana, I agree entirely with you on this.

And yes, I wait for your letters!

Hello would you mind stating which blog platform you're using? I'm going to start my own blog in the near future but I'm having a difficult time making a decision between BlogEngine/Wordpress/B2evolution and Drupal. The reason I ask is because your layout seems different then most blogs and I'm looking for something completely unique.
P.S Apologies for being off-topic but I had to ask!


Take a look at my website :: Louis Vuitton Bags

Peculiar article, just what I was looking for.

Hello there, You have done an incredible job. I'll definitely digg it and personally suggest to my friends. I'm sure they'll be benefited from this web site.

An interesting discussion is worth comment. I believe that you need
to write more about this topic, it may not be a taboo
matter but usually people don't speak about such subjects. To the next! All the best!!

Hiya! Quick question that's totally off topic. Do you know how to make your site mobile friendly? My website looks weird when browsing from my iphone4. I'm trying to find a theme or plugin that
might be able to fix this issue. If you have any suggestions, please share.

Hey there! I'm at work browsing your blog from my new apple iphone! Just wanted to say I love reading through your blog and look forward to all your posts! Keep up the fantastic work!

Magnificent items from you, man. I have take into accout your
stuff previous to and you're simply too wonderful. I really like what you've acquired right here, really like what you are saying
and the way through which you say it. You are making it
enjoyable and you continue to take care of to stay it wise.

I cant wait to learn much more from you. That is actually a terrific
website.

What's up friends, its enormous paragraph about educationand entirely explained, keep it up all the time.

My weblog :: Air Max One

Its not my first time to visit this site, i am
visiting this web page dailly and take pleasant information from here daily.

I know this if off topic but I'm looking into starting my own weblog and was wondering what all is needed to get set up? I'm assuming
having a blog like yours would cost a pretty penny?
I'm not very web savvy so I'm not 100% certain. Any tips or advice would be
greatly appreciated. Cheers

I am not positive the place you are getting your information, however good topic.
I needs to spend some time studying more or figuring out more.
Thanks for wonderful information I used to be in search of
this info for my mission.

of course like your web site but you need to test
the spelling on quite a few of your posts. Many of them are
rife with spelling problems and I in finding it very
troublesome to tell the reality however I'll surely come again again.

If you would like to improve your know-how only keep visiting this website and be updated with the hottest gossip posted here.


Here is my webpage; related site

Because the admin of this web site is working, no doubt very soon it will be well-known, due to its feature contents.

Useful information. Lucky me I found your website by accident, and
I'm surprised why this coincidence didn't happened in advance!
I bookmarked it.

Check out my homepage :: More Help

Good day! This is my 1st comment here so I just wanted to give a quick shout
out and say I genuinely enjoy reading through your articles.

Can you suggest any other blogs/websites/forums that cover the
same topics? Appreciate it!

When some one searches for his essential thing, so he/she wants
to be available that in detail, thus that thing is maintained over here.

Hi to all, it's in fact a fastidious for me to go to see this website, it contains valuable Information.

Here is my web-site - Mulberry UK

I every time spent my half an hour to read this web site's articles or reviews every day along with a mug of coffee.

Do you have a spam problem on this site; I also am a
blogger, and I was wondering your situation; many of us have developed
some nice methods and we are looking to swap solutions with others, be sure
to shoot me an email if interested.

Hey would you mind letting me know which hosting company you're working with? I've loaded your blog in 3 different
browsers and I must say this blog loads a lot faster then most.

Can you suggest a good web hosting provider at a fair price?
Thanks a lot, I appreciate it!

Heya i am for the first time here. I found this board and I
in finding It really useful & it helped me out
a lot. I am hoping to offer one thing back and help
others like you helped me.

Feel free to surf to my web site; Nike ID []