Woman In The Dunes 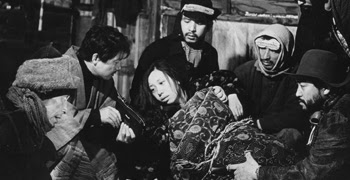 I warm up to any one generally, anyone who is searching for something, even for tiger beetles, in a desert. That is what the protagonist of this wonderful movie is in search of, as he walks and stumbles across a desert that has been beautifully choreographed in this movie, released in 1964, and directed by Hiroshi Teshigahara. He tells us that this place is not fit to live and then realizes he has missed the last bus home. He meets villagers who are too eager to help and decides to stay for a night in a sandpit with a woman, who lives there alone.

Never has sand, suspense and sexual tension been as beautifully portrayed as in this movie and what follows is a bizarre turn of events as the woman asks his help in shoveling sand up the pit to the villagers, who sell it to a construction site. Naturally he refuses and attempts to escape till all attempts fail. "Are you shoveling to survive, or surviving to shovel?'' the man asks the woman. Then he resigns himself to helping her and releasing his and her frustrated sexual menace, against a constant background of sand, sand that fills all the voids, all the gaps in the life of this lonely woman, whose husband and daughter lie buried in the sand.

His plea to the villagers to let him free is answered by them ordering him to have sex with this woman in their view, against cries, drums and masks, as they build up his frustration to a frenzy, trying to force himself on this woman. In the end he has the chance to leave which he does not take, preferring to stay in the pit with this woman, his woman of the dunes.

One of the first things that comes to mind is the Camusian Sisyphus tale and perhaps all of Kafka. Yet this hero is different, for he seems more credible, more humane and importantly he tries to fight a situation that is odd, mysterious, bizarre, without losing his will, his instinct to survive. He is strong within the context of the situation and his sexual frenzy with this woman is a natural result of the environment he finds himself in, one of shadows, of mystery and of sand. May be there are more angles to this story than the usual existential ones that come to mind.

And yet what about this woman? She is far greater a tragic figure than in any other such cinema, more than any in other dry angst ridden existential concern cinema, for in her resigned attitude, in her innocent wistfulness, in her self sacrificial pose, her acceptance, her acceptance of sand and shadows, of the constant shovelling of this ever pervasive sand at night and her quick acceptance of this man and her knowledge of other women, in Tokyo and the ready acceptance of her family lying buried in the sand lifts this figure to the heights of saintliness.

The performance by Kyoko Kishida, as the woman in the dunes is brilliant. The background score is scorching, it sears the skin as you hear it. The sand and the desert in this movie is the best choreographed that I have seen so far, and for hours afterwards, you can see it fall, fall. This is not just a great movie but a wonderfully crafted piece of work, complete, sure, subtle, mysterious and disconcerting.
Posted by Kubla Khan at 2:55 pm

this is one of my favourite films as well. you have delineated very nicely what is so great about it...

To the Sisyphean narrative it adds its own dark view of human sexuality too. that's what makes it so disconcerting and unsettling - the sexual impulse as the expression of the will to survive even in the face or irrationality, hopelessness and absurdity.

It is actually based on a novel of the same name by Kobo Abe. Always wanted to read it.

Yes, you are very right. the sexual expression as the will to survive.....very well said. yes, i was aware of the Abe novel and like yourself, always wanted to read it.