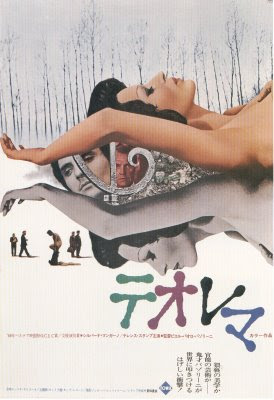 In order to understand this movie, perhaps one must know how to see it. May be, one need not even think of making any sense of it but sink into the deep mysticism of this movie or lack of it. This movie, called Teorema is regarded as one of Pasolini's most transparent and difficult movies though it is not as shocking as Salo. It is not just enough to watch or read something but to make sense of an experience, to construct out of a series of emotional movements some pattern that we can label as representative or symbolic of a particular emotion. The lack of clarity, after watching a movie like Teorema is not the director's fault but ours.

A beautiful stranger enters a factory owner's house, seemingly uninvited. In the beginning though, we are shown a factory and the owner questioned about the suitability of the factory being run by the workers. There are questions raised about bourgeois expectations and capitalist barriers. When we are introduced to the family, we see an apparently happy one. The handsome stranger, whose arrival is announced by a telegram, settles in, reading Rimbaud. However, there are no surprises evinced at his arrival.Then the stranger, played by Terence Stamp, goes on to seduce each family member, the parents, son and daughter and the maid too. The man's presence is welcome and not unusual. He then leaves as suddenly as he had arrived but not before each family member acknowledges their individual debt to him. The family then tries to cope in his absence, each in their own way.

The second movement of the movie is perhaps more important than the first or more meaningful. Now that the stranger is out of the way, a sense of dissolution has set in, in their inner selves and for this, the outer landscape must now play a part. The maid leaves, arrives in a run down commune and eating nettles, settles down on a bench and performs miracles. The daughter becomes rigid and goes into a stupor, eyes open and is stretchered to a hospital. The son paints on window panes but in a brilliant monologue suggests that artists can or should say or do anything and even suggests that art is akin to madness. The mother, finds solace in physical love with unknown young men, though not without physical tension. The father, owner of a factory gives it all away, and in a scene of remarkable surprises, strips and walks into a wild almost biblical landscape, screaming his heart out, at which note, the movie finishes, apparently.

After each seduction, we find the willing seduced thanking the stranger for he has filled them with something that they did not have. In the case of the maid, she becomes illumined, for after her spiritual experience through this physical Union, she has become almost like a saint, and in one unforgettable scene, she is shown suspended in air, above a rooftop. While she grays, the villagers around her realize her saintliness, bowing down in deference. In her end, she chooses to be buried to cry but not to die. The son achieves a meaning in his previously useless artistic efforts for he realizes the efficacy of art only in experimenting through stretching beyond the acceptable, beyond the generally seen. The daughter's homage to the stranger is quite explicit for she has discovered a man besides her own father and her catatonic stare is a result of finding something which perhaps has been her undoing. In other words, her medicine is her poison. The mothers position is clear in a speech to the handsome alien, for she has found love and a new zest, an interest that she was previously lacking.

The factory owner's position and his response, his almost near death physical illness and his later moral response and a renouncement of his material position is the direct result of his encounter with the stranger, and his naked flight into the brown desert is his final leap.

Pasolini was a Marxist catholic, an impossible position in itself but not absurd. There are possibilities and in fact seeds for socialism in all three of the revealed religions though catholic industriousness has reduced it to a facade of moral imperialism. Pasolini's stance, in my view, in this movie is to show the thinness of a bourgeois position yet allowing us to understand a certain receptiveness there, ready made for a revolution, a waiting that seems inevitable for a love, a spiritual rain, that once unleashed, is ready to fall and in its deluge, take with it not only the partakers but every surrounding bit and piece. The establishment, which is the playground of immobility, has a yearning, but this yearning is kept at bay. It needs a stranger, maybe Christ like to dissolve his essence into the elements that are seething with a restlessness for change.

I would like to see this movie as one with some sexual connotations but failed to be convinced there are. Of course there are sexual scenes but they are stilted, almost cardboard like. They seem to lack the rush and roar of passion, for this is not passion but barrenness, a dry earth waiting for rain. There is thus a fusion of things in this movie, a mix of socialism, religion and sexual imagery. From time to time, within scenes we see a brownish dull and dusty landscape, and a mountain which perhaps seeks to remind us of a final preparation for the finish, for its characters too. The imagery is thus starkly realistic and surreal too, from a busy train station to a mystical field. The musical score is brilliant and the performances are all praiseworthy. This is a great movie by a great artist who was besides a film maker a poet, a novelist and an essayist but more importantly, a revolutionary, an artist and a political man. Maybe we must remember to read his Sex, consolation for misery, which could be another theme of this movie.
Posted by Kubla Khan at 12:15 am

I am a huge fan of this film, as you probably already know. What I love most about it is its expression of a truly unique religious sensibility, which I don't think has any parallel, not just in cinema but possibly even in literature and other arts. Dreyer, Bresson, Bergman all are deeply interested in religion but there is something predictable (though still deeply stirring) about their treatment of this subject - moral choices, existentialism, freedom etc but not so with Pasolini. It is a deeply personal vision, far removed from any school of thought.

With Pasolini it is almost impossible to define what he is trying to do without taking recourse to contradictory phrases. a recent retrospective in new york of his films was called "Heretical Epiphanies" somewhere else I came across "spiritual blasphemy." Ultimately one of the aims of the film is to reconcile these apparent contradictions or to show that they are not as contradictory as they appear on surface. they are often deeply linked - sex, desire, religious longing, artistic spirit, miracle, political utopia there are hidden connections which bind all of these things.

"Ultimately one of the aims of the film is to reconcile these apparent contradictions or to show that they are not as contradictory as they appear on surface"......I agree entirely with your comments. And with your comparison with Dreyer, Bresson etc.
Pasolini brings to his complexities the realism of lives, real lives, and a suffocating intellectual intensity, while as the others, equally passionate rely on more instinctual or more predictable dilemmas.

Spiritual blasphemy is more realistic than pure hedonism or a total state of denial. If I overcome my torpor, I will post an extract from Heretical Empiricism, a book that I have previously recommended.
btw, I read your post on Teorema months back.