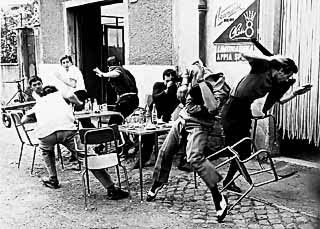 To the pantheon of Pasolini's illustrious movies like Mamma Roma and Teorema, I am now adding Accattone, a movie that I hadn't watched till now, for in Accattone, all of Pasolini's poetic, philosophical, religious and social concerns find expression. Accattone is not just a movie, it is a statement, a work of cinema that celebrates protest without declining into rhetoric.

Vittorio, called Accattone, is a pimp who earns his living by exploiting Maddelena. In addition however, he supports a poor woman called Nannina and her kids, who live with him. Accattone has left his wife and son and is living the life of a no good person, by his own acknowledgement a cardboard man, a bum. However, Accattone's life turns for the worse when Maddelena goes to prison after being beaten by his cronies and Accattone finds himself begging and starving, as his only source of income is gone. He meets Stella, a sensitively beautiful girl, poor, innocent and hapless, to whom he admits his love. However, Accattone is not unwilling to pawn her too and bring her to the streets. Stella resists, Accattone feels rage at his own doings and decides to change and work. It is hard work for a man who hasn't worked ever and he decides to common robbery. In the end, fleeing from the law on a stolen bike, Accattone meets an accident and dies.

The prosaic summary above is only the skeleton around which Pasolini weaves his magical craftsmanship. I felt I was actually seeing the Weeping of the excavator, one of his great poems. This movie, centred around the borgates, slums and shanty towns, is the place where Pasolini found a fruition, an expression, a mark, a sentence that he could read, a sentence that could be read aloud, in a world immediately after the war, where bums roam in a tragic, sad, seedy, poor and very unromantic circumstances. This movie, based on Pasolini's own apprenticeship in the borgates and on his novel, A Violent Life has all the essentials that characterize his cinema.

But who is Accattone? We find in him a figure for whom we must desperately try to see a shade, an idea of grace. Yet, in a weirdly suspicious way, his face, his demeanour sets him apart from the hoods he hangs with, for there is a tragic air of fragility around Accattone, for he breaks down every time he breaks the established laws, even after stealing his son's chain. While he prostitutes Maddelena and coerces Stella into the same, we hanker after an image of some goodness in his heart, hoping he might turn, change, give up. But these are ignoble aims for the naive viewer, the passive reader, as this is a world at the edges where rage and passion have mixed into poverty and art.

The images in Accattone are the ones Pasolini writes about,

"bored marketplaces, down sad streets
near the river docks between shacks
and warehouses mixed with the last fields.........
stupendous miserable city, you taught me what joyful ferocious men
learn as kids,
the little things in which the greatness
of life is discovered in peace,
how to be tough and ready
in the confusion of the streets..........
to defend myself, to offend,
to have the world before my eyes.........
they are not brothers to me,
and yet they are true brothers, with passions of men who,
light-hearted, inconsistent,
live entire experiences unknown to me"........

It will not do to romanticize Accattone, but he is a romantic! This man, who doesn't think twice about stealing and begging rather than work, is a person who is destined to be a saint. He wants sainthood, he prays for it, he has a bizarre vision of his own burial, where he wants his grave in the sun, not shade, in a landscape of biblical intensity. When Stella confesses that her mother prostituted herself to bring her up, Vittorio says that she should make a monument to her. You are lucky, he tells Stella, not to know things. Accattone knows things, he has seen the world, he hangs around, trying to make spaghetti with starvation sauce. I am not suggesting that poverty is romantic, but with Pasolini, we are in the grip of a landscape that transformes the slums and shanties into a sacrosanct world, a mythic world of grace based on sordidness.

This sordid affair is not actually the doing of people like Accattone but exists in spite of all these bums, hanging and wasting outside their familiar haunts, in very similar conditions in different landscapes across cultures that are united by the poetry of poverty. The technical aspects of this movie show the future promise of his emerging craft and the background score, jazzy at times, is like a festering sword into myriad wounds. The Bach sequence is well known, as Accattone grapples and fights on a dusty street. Social protest on its own is not enough. One needs to delve into the causes, to seek out of the ordinary seediness of life a poetry that liquifies hovels and shanty existence into a modicum of grace. Hence the Bach, the black and white visions, religious symbols, acts of grace. We leave Accatone lying dead on the street and wonder what happened to the other bums, Stella and those shanty places. I am not sure but I think I know. Accattone is a tragic figure and Accattone is a tragedy.
Posted by Kubla Khan at 7:26 pm

Kubla, hello. Can't believe you like Mama Rosa. Thought it was utter crap. (the lead woman is much better in the secret of Santa Victoria with anthony quinn).

Btw, there's an article by Buruma on Fassbinder in the latest edition of the NYRB.

Saw 'Atonement' yesterday. A good film. Have you seen it?

Yes, i have read the piece at NYRB, thanks.and haven't watched Atonement, the word puts me off.
re Mamma Roma, it is one of my favourites but we leave it at that.
take care.

The word 'atonement' puts you off? That *is* interesting. Would be very interested to hear your thoughts/read a post on why so.