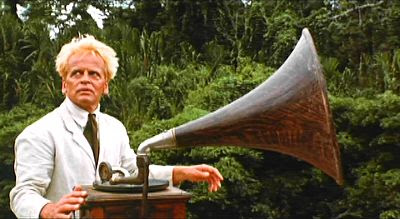 Now, Fitzcarraldo, an Irish emigre in Peru, "conquistador of the useless", after many unsuccessful business enterprises, gatecrashes into an opera house, with his mistress, hands bandaged and bleeding, demanding to see his beloved Caruso perform, in the heart of Peruvian wilderness, in the forest, beside the forest, among the natives. And from there, comes the desire to build an opera house, in this wilderness and invite the best of Europe to perform, at any cost, at whatever it takes, for this is the only thing that must be done.

Fitzcarraldo, one of the great collaborations between Klaus Kinski and Werner Herzog is a feat in cinematic brilliance, a movie that exists on its own, without many comparisons, and open to different interpretations, depending on your dominant mood. And those familiar with Kinski see the same brilliance, the touch of genius that is characteristic of this great actor. So, Fitzcarraldo, now raving with an obsessive desire for his opera, must have money to realize his dream, money that is insufficient from his manufacturing ice and since this drama is at the turn of the 20th century, Peru divided between rubber dons, he decides to join this grand exploitation of the rubber trees, to finance his dreams. He is helped to buy a ship for this expedition by his mistress( who runs a brothel) and after assorting a motley crew, he sets off, down the amazon, towards Pongo das Mortes, towards the rubber trees, an area savaged by native Indians, unenthusiastic about the civilizing whites.

We are thus witnessing a drama, an adventure, as this ship heaves and rolls on with Fitzcarraldo, with his obsessive drive commanding a nervous crew, as they enter the dangerous Indian territory. The crew flee, just three persons stay back with Fitzcarraldo as they are surrounded by the natives. However, in a strange reversal, they turn to be his helpers as he decides to cut through a mountain and the ship is dragged through it, into the raging torrents, where finally lost, it flounders and Fitzcarraldo is back, lost and defeated.

This movie can be seen, seen for the sheer delights of a tropical kind, especially as the ship, surrounded by invisible hums rolls into the heart of fear. And also for the great technical qualities, the immensity of effort as Herzog battled to steer the ship through forest and rock. But who is Fitzcarraldo and what does he want? He desires an opera house and Caruso, in the wildest Peruvian jungles, he claims to be "the spectacle of the forest". Realizing the difficulties, he declares that he will "move a mountain". He has no concerns for anyone except himself. He loves his opera, his music, he does not believe in anything else. Apart from that, I thought, as he steered his ship, that I was in the heart of darkness, Conrad's apology to imperialism, for it is impossible not to see the parallels, this great civilizing mission, this operatic imperialism, this conversion.

As the invisible chants get louder and menacing, Fitzcarraldo takes his gramaphone out and blares his opera at the forest, at the invisible, deadly natives. In its very execution, this scene is comic and shows his desperation, but the humming stops, the noise abates, as they listen, listen and as a reverence to a superior expression, they obey. Is not this a kind of imperial motif, Fitzcarraldo acting through opera, bearing on the soul of the unconverted, crushing him through music, through wails. I saw parallels towards apocalypse now as napalm and classical music blare along with cowboy hats and nauseating accents, as the very marauding face of imperialism is softened through music. Herzog declared his disinterest in the native situation, his story is that of fitzcarraldo's obsession and as I said earlier, we can accept that. The ship, a tool, the rubber dons, exploiters, the natives defeated and naked, these are familiar stories. However, one cannot but question Fitzcarraldo, for one should ask and question his blindness towards his surroundings.

The creator cannot distance himself from his created, from his actions. Herzog, the artist must bear responsibility for the savagery that he does not justify nor condemn. The ship, cutting through forests and mountains is an imperial adventure, that he makes clear. However, the opera, the opera house and its silencing the natives is one too. We see the last image of Fitzcarraldo, on his ship that he has now sold, to finance a last performance, with an expensive cigar; he stands, surveying, burning, fuming. He is a megalomaniac, his desire is manic and even in his defeat, he is rigid and proud. Fitzcarraldo is a dangerous man, who only loves himself, and as he smokes his cigar, we are reminded that this is kinski, in a performance that unsettles the viewer. Kinski smoulders on the screen, unpredictable and mercurial, raging and fighting and when we see him as the movie begins, he is already breathless, tired, bloodied and brilliant. Within a few minutes, we are in the vicinity of genius.

i truly love this film, Fitzcarraldo really is the only reasonable person with regards to opera. i really do think most of the time Herzog is not so great, but with Fitzcarraldo this is awesome. Of course there are all those things to consider, colonialism and such, then again, he is an outcast too, gets mocked all the time and his friend with the brothel is also not exactly what one can call social acceptable, at least not everywhere. as i was reading Hebbel yesterday i came across this sentence that passion isn't a sin (in the sense that it destructs), but coldness is. It's suitable somehow for him. It is not true that he does only love himself, he loves art, the opera, and in general one can see this movie as a sort of parable of how far one can go for one's passions, for art. I am all for it, for such crazy undertakings and opera everywhere.

yes, only a certain passion can lead to greater things.
as i pointed out, he is breathless at the beginning because he is so frantic. it is only his madness that saves him. yet, one cannot touch him, for he is strange, and estranged.

Actually in comparison to Apocalypse now Fitzcarraldo is pure innocence. He doesn't music as a tool to scare people, there really one could draw much more uglier parallels to colonialism. What it does not make it any better is that Fitzcarraldo really doesn't care about the rubber and such except of course that his does finance his dream, but if lets say some greenish leftish organizations could provide him with the money - so i imagine - he just as good would have made business with them. Apocalypse now is far worse re colonialism, even though Fitzcarraldo is maybe more "graphic or " in this respect. In Apocalypse Now Wagner, (and especially when one looks which passage from Wagner is being used, Valkyries) is used to scare the people while Fitzcarraldo only wants to enjoy himself, or maybe even share his passion, he has zero missionary or pedagogical interest.

Fitzcarraldo is not a missionary, yes. and his opera is not a tool to scare but silence, in a benign way. the comparison with apocalypse now is more with the ship and other rubber tycoons in mind rather than Fitz himself.
Fitzcarraldo is a man whose interests are self absorbing, removed yet linked to the system he is a part of.

KK, at the risk of pissing you off no end, I thought this was a crap film. I wonder if 'the west' can think of a genius that isn't 'mad' (Goethe?: often rounded, always open)

Have you seen Rescue Dawn? What did you make of it?

On the other hand, thought Wild Blue Yonder was very good-and love the music. The Emmi Leisner track on that is superb.

Gosh, it's a lovely , lazy Sunday morning here, and perhaps the bright light that suffuses everything means that I just can't set muh store to this Romantic, 'northern' striving.

It will be facile to compare movies with each other, though i have not seen the ones you mention.
if i will, we will share notes.

KK, I don't know what you have against comparisons.
I'm still struggling to understand what you found so great about this film.

The Conrad point you make is spot on (in my opinion)..as if the 'adventure' could be redeeemd by the "idea" !

I don't think it's just the one-sidedness of the character that is unappealing; it's his bloddy-mindedness.

In the final analysis, what is it that we are supposed to appreciate: the mission of bringing the music, or the sheer effort and determination ? I think it's the latter, but it just doesn't work for me. If the Will is everything then it doesn't matter if it is good or delusional. It's beyod good or evil..

May be we need to see a movie at different planes, without an overbearing desire for what it says. the message or the meaning may not always be so important.
Kinski's performance is just enough......
re comparisons, surely that will be atrocious. a movie, a different language, a different world from another. why compare?
i think we must watch something for just the act of watching at times, for cinema is the most profound of arts, more immediate than literature, more near.
in the end, as Fitz smoulders himself and his expensive cigar ( he spends a bit of money on it) he watches everything with a certain look, which suggests his partisan attitude towards his surroundings and at the same time his passion towards his aim. the end is the thing, so the beginning when he is actually panting.
we c'd go on......

thanks for that kubla. I didn't see it on that plane. I hear what you're saying and the point about performance not necessarily pointing to meaning,a message, is exactly what I was trying (in my usual long-winded way) to say:the existentialist hero.

Why compare? I don't know. it's something we do all the time, isn't it? We say we like this song, not that one..or this work touches us more than another piece by the same author/artist/musician.

Yes, passion towards his aim. But for me, and this is only my subjective liking/disliking, I just couldn't relate to it.

Anyway, thanks for your insights. As always, I learn something new when reading your blog.

VaporFi is the highest quality electronic cigarettes supplier on the market.