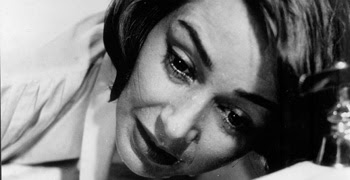 Perhaps the whole art of Alain Resnais lies in inducing in the viewer a dulling of the senses, a hypnotic paralysis, a ease that disconcerts and creates a calm dread, stirrings in the mind, troubled thoughts and a feeling akin to the characters that grapple with similiar feelings on the screen. Hiroshima Mon Amour bears a few resemblances to Last Year In Marienbad but I thought that it is more accessible, nearer to the viewer and more possible in a strange way.

A french actress playing a nurse's role in a movie about peace falls in love with a Japanese man in Hiroshima and during the few hours they have together, she reminisces about an earlier love, when she was growing up in a town in France during the war. It seems that the actress, played by Emanuelle Riva and the Japanese architect (Eiji Okada) have fallen in love as they attempt to make sense of their present relation in the context of their past. The first image of the movie itself is a brilliant painting, a twisted collage of grappling limbs, skin festooned, covered with boils, disfigured and scarred, remains of a post nuclear nightmare, and then the skin regains its lustre, as we see a woman's hands caress and pierce a man's back, but nothing more, nothing less, only her voice, her sonorous rhythm, her voice as she speaks to this man, as she disagrees, as she tells him, "Everything, I know everything" and as he disagrees and says "Nothing, you know nothing".

Her aim is to "reconstruct and describe", since there is nothing else, as she deconstructs her love in war time France, with a German soldier, an enemy, her secret meetings, their discovery, his death, her shame. She remembers now, to remember everything, as she has never before, as she has forgotten, as she remembers again, her love, those days, meetings in barns, ruins and rooms, and now in Hiroshima, she remembers, the destruction of a city, its plunder, the ten thousand suns shining in the city, its total destruction, she remembers a beautiful day in Paris when Hiroshima burned. Thus we are witness to her memory as the couple grapple with each other, in passion and with words, as she longs and remembers, as he listens and suffers, in a strange fit of jealousy, he resents her earlier love, he wishes her dead in France, he wishes he never met her, and she, she says, "Take the glass, make me drink, I am beginning to forget you".

The effect that we witness, as Resnais' movies usually achieve, is to not see anything critically but be a part of that atmosphere, those emotions as our own memories peel away, like the skin of those dead and undead in Hiroshima. "You are killing me, you are good to me", she says to him, as we hear from her and also witness a confusion of the past into the present, unsure whether she is talking of her past or of the present, as Hiroshima merges into Nevers, image after image, the rivers, the people, the peaceful scenery of Nevers into the garish newly built Hiroshima, her German lover into the Japanese architect, her old self into the new. "One thinks one knows but one never does", she says. So what can we know? The confusion of the viewer is not the director's trick but a realistic expectation, for how can we really know what has happened to people we even claim to know? "In a few years, when I’ll have forgotten you ... I'll remember you as the symbol of love’s forgetfulness. I’ll think of this adventure as of the horror of oblivion".

Hiroshima Mon Amour may perhaps be a meditation on love or memory or desire, or the fragility of memories, acts of forgetting, conscious or unconscious, desire merging into memory, memory of a desire, a mixture of all these, a commingling of images, what came first, memory or this killing desire or whatever. "How good it is to be with somebody, sometimes", she says. And one knows exactly what it means, as we see the enigmatically beautiful Riva, fighting with herself, we see her melancholic eyes and remember her sad hands, her beautiful fingers, the intonation of her voice, the poetry of her words, its calm but killing effect, we see her remember, as she reminds us that all memory leads to forgetting, that Hiroshima too will be forgotten, like her lover was, like she had, and as the Japanese man had reminded her, "Nothing, you know nothing" of Hiroshima, on a beautiful day in Paris, when it burned.

This movie is generally regarded as a complete work of art and critics have grappled with it, some labelling it as the most important film in the post war era. That is a question for serious film critics. I see this movie as a lavish canvas of love, on which the desperately beautiful Riva weaves a magical image of burning desire and seething memory, against a sonorous background of hypnotic music, a poetic screenplay and melancholic images. One must watch all Resnais movies again and again, to fully realize the art of hypnosis and the unsettling fiction of memory. And life. Us.
Posted by Kubla Khan at 1:54 pm

have you read anything by Marguerite Duras? I have wanted to read for long but haven't read any... she wrote some other screenplays too and I think even made a few films herself. One other film based on her book is The Lovers, while not even near Hiroshima... it still is very evocative.

there was an article in the guardian a few days ago about her.

No, Alok...i haven't. i have intended to read Duras but have been putting it off.
thanks for the link.