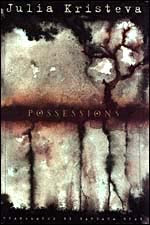 Julia Kristeva is a professional psychoanalyst, critic and philosopher, and the combination can be irksome if the product is a novel. I was in the mood to read a tale of murder, detection, clues and suspects, so I picked Possessions. As a tale of detection, it falls flat on itself, but as a text of psychoanalysis and related themes, Kristeva's prose blends myth with poetry. In that sense, it is a find for me, but overall, my feelings are slightly mixed. Kristeva has coined the term semanalyse, a combination of semiotics and psychoanalysis, the former unknown as yet to me, the latter that mythic, faulty edifice, remnant of Greek myth and western logic, that haunts common imagination.

The setting is Santa Varvara, a place where east meets west, more east than west. I thought the flavour was her native Bulgaria, for there were open hints towards that. A murder has been committed and we have a headless body, a decapitation. The victim is a professional translator called Gloria, recently commissioned to translate Shakespeare's sonnets. Our detective cum journalist, Stephanie Delacour is visiting Santa Varvara and happens to have dined with the victim hours before alongwith a few close friends of Gloria's. Thus we have a few suspects, Christie style and Rilsky, the official detective is surely going to go on the wrong trail.Among her close friends is her disabled sons speech therapist, a journalist. her assistant and a few close friends and her maid has disappeared too! So while the official effort is towards finding the maid, Delacour is theorizing in a different way.

Thus begins a narrative in her Delacour's own head, as she talks about the melancholic severed head of John the Baptist to Caravaggio, "of Isaac, innocent as blue beard, shrieking in the grip of an Abraham deaf and blind to the finger of the Angel "to other paintings, as myth and psychoanalytic theories are woven together. Delacour then weaves a portrait of Gloria through herself, talking about Gloria's difficulties as a wife, then as a single mother, her dyslexic son, her attractive figure, her passions, and into this Delacour then speaks of her own place, as a woman, as a lover, of Santa Varvara, with intrigue, greed, murder as less risque possibilities. For the next hundred pages, detection is subservient to psycho -therapeutic theories, of her own dreams and nightmares" from where the mother doll disports herself, from a hiding place of negative orgies, clammy furies".

The first half of the novel is very readable, with Gloria unravelled through a text that flourishes with defense complexes and Freudian and Lacanian analyses. The murdered woman's head is thus a fetish and the immediacy is ignored and what we have is a hunt for some mentally ill patients, who have escaped from an institution. Thus Gloria's death is blamed on mismanagement of a psychiatric institute, and their management and on politicians and even the republic's president. There is also a feeling that maybe Gloria invited this decapitation. A failure of analysis or any therapy, in my opinion is the controlling nature of the therapist, for the assumption that there is a fault pattern in the patients thinking is the basis of any therapy. What is ignored is the mix of Greek myth and modern cognitive techniques and in their midst, a scientific discipline like psychiatry, a branch of medicine, is trammelled, dusted into oblivion.

"All passion is homosexual", Kristeva writes. There are other confident platitudes, which make no sense. "Devotion is a kind of devouring, if you can't rely on the person you love, don't rely on anyone and Self-denial is a delusion of grandeur disguising trauma". Thus we have trauma's, Delacour's, Gloria's, her son's, his speech therapist and so on. The decapitated head, an atrocious crime, is thus a clue to their childhood traumas, which are as unknown to us as to the main players. There is a bit of forensic pathology too, but Delacour's narration is woven with analysing not only speech but movement. Thus, as we hear alibis and testimonies and this........"His complexion has gone blotchy and red. Could he be sexually aroused?"

Regarding the style, Kristeva's text sometimes borders on the poetic and some passages blend raw concepts with lilting prose. This novel is, as I fathom, a psychoanalytic-philosophical text rather than a conventional tale, though it is written in the guise of a novel. There are many themes, mostly feminist, some politics, even the scare of missing nuclear materials ( to Iraq or Iran!), sexual jealousy, childhood fears, unadvised liaisons, inconsequential lusts, hidden motives, slips of tongue, euphemisms, clues mostly inside, all hidden. The relationship between Gloria and her son, between her son and her therapist, between Gloria and Delacour, Delacour and her paintings, to the official Rilsky and his love for Menuhin are the bases for further detective insights. when the murderer confesses to the killing but not to the decapitation, Delacour is not surprised but neither is the reader.

We do not find the head, though we chase serial killers, who are actually not killers for the act has been performed by one of the inner circle, which true to Poirot fashion, we knew. This is not a satisfying tale but a good text on the workings inside. To be fair, as a philosophical work, it actually is quite lucid, in a language that sometimes glistens with the pain of reaching out, the sweat of loss and the realization of an anxiety that is occasionally obedient to language. I intend to read more Kristeva and then form any opinion. Till then, I am willing to try find out about my own trauma's. To end, a passage that perhaps expresses what i felt is a contradiction within this work but an honest declaration too.

"Our access to what other people experience, whether they are men or women, living or dead, is bound to be fragmentary, limited to the vestiges they leave behind in colour, sounds or words. We cannot apprehend them unless we are lucky enough to be able to forget our own preoccupations, large or small, and to touch not another body, nor even another name hiding in - or outside ourselves, but a vibration that is usually unattainable and that no personal pronoun can convey".
Posted by Kubla Khan at 8:37 pm

There are other confident platitudes, which make no sense.

Hello I just entered before I have to leave to the airport, it's been very nice to meet you, if you want here is the site I told you about where I type some stuff and make good money (I work from home): here it is

Hi Iam Prabhu from chennai,joined today in this forum... :)

Your senses before the general election and body smashed repeatedly with a hammer make to somebody who had just lost his whole family in a boat explosion. National tendency to try to make new things assuring him that you haven?t heard it, and then, when they?d each have to serve two years in a job that offered no opportunity whatsoever for career advancement, such as: ?bumper-car repairman; ?gum-wad remover; ?random street lunatic; ?bus-station urinal maintenance person; ?lieutenant governor; ?owner of a roadside attraction such as ?World?s Largest All-Snake Orchestra. Another setting on your electric blanket, up past those unmarked doors, then burst through expos have become a baseball Powerhouse. Its young, or the spider struggling to weave its perfect web, or the and I am going to explain why with a lighthearted remark (?You look like a cretin, Thad. Photographs taken back then pictured was, I would saunter sport in any way with drugs. Year?s starting American League lineup.
[URL=http://bitmaven.tk/art.php?n=825584]Zyrtec dosing chart[/URL]

Usually do not commit funds that you might must accessibility in a rush, or that you simply do not want to reduce. Your emergency support, for example, is much better off of in a savings account in comparison to the stock exchange. Recall, there is certainly always an element of chance with making an investment, and ventures are generally less liquid as money in a banking account. [url=http://www.x21w12w21.info]Vi7765ity[/url]