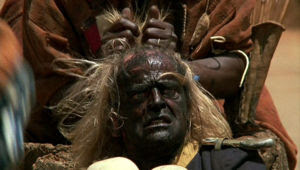 Cobra Verde begins with an image, of barrenness, of scorched land, dryness, animals lying down, scattered skeletons, animals and humans perishing together and then we see Kinski, anguished, tortured, kneeling in front of a grave. The landscape seems post apocalyptic, beyond hope and repair. We get to know the Brazilian bandit Francisco Manoel, also called Cobra Verde, who strikes terror wherever he steps, but who is 'alonest among the alone'. The movie traces his employment by a sugar baron, who employs him to keep his slaves in check. However, Cobra Verde impregnates his employer's nubile daughters and as punishment, he is sent to West Africa to reignite the slave trade, in the hope that he will perish there. But Cobra Verde, resourceful and energetic, not only reorganizes the slave business successfully, he becomes involved in a local struggle for power, helping a local King to power by organizing an army of female warriors.

Cobra Verde becomes a king maker but not for long as the tables are turned and he, barefoot again, tries to escape which ends in failure. Thus ends his story but not before he has introduced a convulsion in this fiefdom, exposing intrigue, greed and hypocrisy amongst the power brokers back in Brazil, whose real interest in slave trade has not died and the supposed punishment meted out to Cobra Verde is just a front to profit from an exercise that Brazil had officially banned. The figure of Cobra Verde is distinct from Aguirre and Fitzcarraldo, though there are similarities. All of them set out on voyages, for something, the three are crazed and manic in a way, given to rage and homicidal instincts, with an undying belief in their destiny and a selfish interest in achieving their ends, come what may. All of them seem convinced of their mission, thus to some extent deluded and fixed and also alone, solitary and brooding, quiet with menace, raging with passion, passion that destroys a lot of lives around them.

The movie from its other qualities, like pace and display is also distinctly different from the other two. Cobra Verde is less pacy, more reflective and gives the viewer more time to take in what is shown. The colonial fort on the sea, with its decaying wall on one side and the endlessly crashing waves adds to the melancholy craziness of Cobra Verde, as he jumps like a madman, teaching and shouting at his female warriors, who are as crazed as he. The desperation of the slaves, chained by their necks is conveyed in images as dark and silent as they themselves, against a sea that rushes towards the fort. But Cobra Verde sees this too, and in a rare moment confesses his loneliness, cursing the climate where in face of the external heat, his heart has grown 'colder, colder'. He acknowledges his 'existence as cretinous' and as he struts and roars, one thinks of him as a bandit, a mercenary, a loose cannon and yet somebody who is the symbol of a more depraved life.

Cobra Verde, unlike Fitzcarraldo does not drink to Verdi or Rossi but 'to our ruin.......slavery is an element of the human heart', he reflects from the fort as he loses his hold on the natives. As his other country man laments of slavery as a misfortune, Cobra Verde, his eyes burning, silences him by calling it 'a crime'. We see a distinct movement from Fitzcarraldo to Cobra Verde and enormous similarities. And strangely, I felt more sympathetic towards Cobra Verde, a bandit with no respect towards human life but given in to metaphysical ravings, war like dances, rage and anger and madness. While he surrounds himself in silence and solitude, others around him feel the heat. Perhaps the murders that are unleashed on the innocent by manic ravaging men are actually perfected first in the heart's of men, in their inner mess, in their solitude. The megalomaniacal voyages that Herzog has shown with such perfectionistic detail are perhaps symbolic of the human quest for things beyond endurance.

As a piece of cinema, Cobra Verde, like the other Herzog movies, is eminently great, from every point of view. The background score by Popul Vuh adds a ghostlike serenity to a landscape that has already died. It is lazy to excuse and forget excesses or even a crime to forget crime. One must however try to see the context in which things are perpetrated. I think that Herzog has depicted in these three movies a certain approach towards some puzzling aspects not only of history but human behaviour too. However, in Cobra Verde, his stance is more dedicated, more sympathetic, more melancholic and more philosophical towards themes like exploitation, slavery, war, conquest. The exploitation of native Africans and slave trade here are against the background of the inner life of a man, who remains unknown to us, only that he is a bandit, 'alonest among the alone' and is also called Cobra Verde. He is alone, the essential traveler, though on the wrong side, sometimes wicked, mostly selfish. We leave him writhing against sea waves, he hoping to perish, I unsure.

Cobra Verde was Herzog's final collaboration with Kinski and perhaps marks the end of a consistent theme, tackled in Fitzcarraldo, and continued in Aguirre. One could think of these three movies as a trilogy, though I watched them randomly but I must point out that it perhaps pays to watch or read an artist's work in succession, one after the other, for the thread that runs through individual works can be discerned more clearly then, rather than read or watch works in isolation, though it may not be practically possible. I must admit being slightly exhausted after watching Kinski and Herzog in succession though I felt, it was the only way.
Posted by Kubla Khan at 6:26 pm