Aguirre, The wrath of God 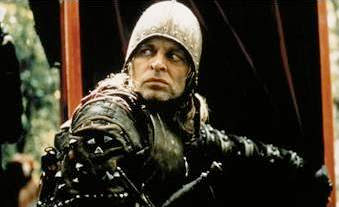 This movie is generally regarded as Herzog's best by film critics and it is such a studied approach towards multiple themes and as a stylistic and craftily made movie, it shows the mastery of an artist who was barely 30 when it was completed. Aguirre is a spectacle, a visual spectacle but more importantly a horrifying one, for we behold the scenes with discomfort, with mounting unease, with a tremor that reflects the fever of the characters we see, till they blur into oblivion, and as the last credits roll, we have seen horror and closing our eyes, remind ourselves of the greatness of art.

The movie traces a group of conquistadores, who having destroyed the Incans, go in search of the legendary El Dorado. The mission is led by Pizarro, the conquering general who detaches a section of his men to survey the amazon river further down. This detachment is led by another leader Ursua, who in the light of insurmountable difficulties, decides to retreat. This is prevented by Don Aguirre, who has him shot. Aguirre rebels and his soldiers follow suit. Then follows a journey on a raft down the Andean amazon, in search of gold and land, surrounded by invisible enemies, starvation, disease, death and uncertainty. One by one the men are killed by invisible arrows, they start to hallucinate and lose the strength even to rebel against Aguirre. The last man alive on a hopelessly drifting raft is Aguirre himself, as he surveys the river around, declaring that he is the wrath of God, and is willing to marry his own daughter to scion a breed of true fighters. We see him surrounded by the dead, including his own daughter, as the raft is taken over by monkeys, and Aguirre drifts into oblivion.

To say that this movie is just great is to belittle any important thing that one watches. The narrative here follows from the past but is more linear. The story, if it is that, is of conquest, of taking away from the weak what belongs to the weak. It does not have the pretensions of an adventure, even a benign imperial adventure, for the unforgiving nature of the landscape takes away all pretense. It is about conquering and as the monk who narrates the story tells us, the imperative is also "to bring to the pagans, the word of God". This is not the overbearing concern for Aguirre, who once declares that he is not interested in gold as much as in conquering the land and people around him, in subduing them. The soldiers have their own interests, the hastily coronated emperor on the raft his own. The monk, the man of God seemed hypocritical, but a golden cross was very attractive even for him.

Aguirre's case is separate. Played by Kinski, this performance by the great actor is one where he does not speak much, but seethes, burns, as he walks and struts on his stage, his raft down the river, as he walks with a slant, head tilted, eyes green, with derision at everyone and some sympathy for his daughter, his little one. Only Kinski could have played Aguirre, for he brings to life a homicidal monster, a man who is the ultimate traitor, a rebel against Spain and the Church. Aguirre wants not gold or God but victory, for as fever and delirium claim all his men, as his daughter lies dead, all his men fallen, as invisible arrows rain down on them, and as he defeated but standing surveys the jungle around, he claims "to stage history like other stage plays". For Aguirre the conqueror, the interesting part is conquer alone, to civilize the wretched is another perhaps less attractive goal.

One sees the fascist plunder of South America as hordes of Europeans pleaded to bring the word of God to innocent, weak and uninterested pagans but this core hypocrisy is shown here as it was, led by brave men yes, but hollow, hypocritical, led on by ideologies that are outwardly Christian but inwardly crusading, destructive, derisive, enslaving. As the raft of dying men fades into the river, one must wonder of present day invaders, who aim to democratize, to civilize, to bring to another people what surely they might not want. The horrors of war, of present day conquistadores, of murderers wearing cow boy hats, of heavens opening fire, of thunder and awe, are surely no different from Aguirre's wrath. A case for madness might be made for Aguirre but that would be dishonesty, for there is method in his madness and in his greedy men. Herzog has not just portrayed a fascistic raft going down nowhere but an important question for marauding people to answer. Aguirre is a phenomenal movie and Kinski's performance a sample of sublime art.
Posted by Kubla Khan at 6:36 pm