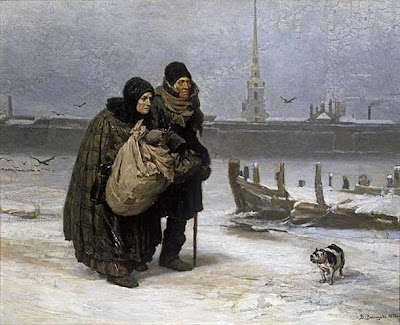 A great passage from Dead Souls (one of my favourite books) in which Gogol compares two different types of writers. The second type, I think, is Gogol himself.

"Happy the writer who, after ignoring characters that are boring, repulsive, astounding in their sad actuality, gravitates towards characters that manifest the high dignity of man, who, out of the great maelstrom of images that whirl about him daily, has chosen only the few exceptions, who at once has altered the elevated pitch of his lyre, has not descended from his height to the level of his poor, insignificant brethren, and, without touching the earth, has given himself, all of him, over to his own images, which are exalted and removed far from it. Twice enviable is his splendid lot:he stands among them as if in his own family, and meanwhile, his fame spreads wide and clamorous. He has beclouded people's eyes with intoxicating incense, he has flattered them wondrously, concealing what is sad in life, showing them man in all his splendour. All clap their hands and hasten after him, and rush to follow his triumphal chariot. A great universal poet they dub him, one who soares above all the other geniuses of the world as an eagle soars above other high-flying birds. At the mere mention of his name, ardent young hearts are seized with trembling, responsive tears glisten in every eye. For strength has no equal- he is a god! But such is not the lot, and different is the fate of the writer who has made bold to summon forth everything that at every moment lies before the eyes and is not perceived by indifferent eyes, all the dreadful, appalling morass of trifles that mires our lives, all that lies deep inside the cold, fragmented, quotidian characters with which our earthly, at times bitter and tedious, path swarms, and who with the robust strength of an implacable chisel has made bold to set them forth in full and bright relief for all the people to see! It is not for him to reap the plaudits of all the people, not for him to behold the grateful tears and unanimous enthusiasm of the souls that have been stirred by him; it is not him that a sixteen-year-old girl will fly, head awhirl and hero-worshipful; not for him to lose himself in the sweet enchantment of sounds plucked forth by him alone; not; in fine for him to escape the judgement of the time, the false unfeeling judgement of the time, which will brand as worthless and base the creations cherished by him, will assign him as an ignoble corner in the ranks of those writers who offend humanity, will attach to him the qualities of the heroes depicted by none but himself, will take from his heart and soul and the divine flame of talent. For the judgement of the time does not acknowledge that equally wondrous are the lenses that survey suns and those that convey the movements of imperceptible insects; for the judgement of time does not acknowledge that much spiritual depth is needed to illumine a picture drawn from ignoble life and elevate it into a pearl of creation; for the judgement of the time does not acknowledge that lofty enraptured laughter is worthy of taking its place beside the lofty lyrical impulse and that a whole abyss lies between it and the posturings of a clown in a fair- booth! This judgement of the time does not acknowledge, and will turn it all to the reproach and ridicule of the unacknowledged writer; without due portion, without response, without sympathy, like a homeless wayfarer, he will remain alone in mid-road. Harsh is his chosen course, and bitterly will he feel his solitude".

I agree the second one is definitely a self-portrait. It is ironical and sad that later he himself wanted to turn himself into the artist of the first kind that he talks of here (out of love for his country) but that would've meant compromising with his artistic integrity which he couldn't do. As a result he went mad.

Gogol is very much like a painter. He makes you see things. Nabokov warns against us relying entirely on his fiction to see Russia. Gogol calls it Rus, something i am familiar with.

Gogol's love for Rus is not based on paranoia or narcissism. it embraces all emotions. he recognizes madness easily in others. and yes, integrity as an artist is discernible in his works.