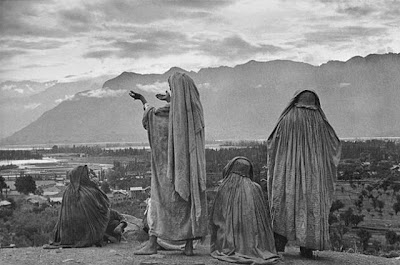 These women are not of this world. They have been left behind by a horde that has passed into unmemorable oblivion. What seems like a great flood, a catastrophe, a raging seething disease, a visitation from the skies itself, a never ending night of death and destruction, something like all of these has left the visible valley. The valley's ache has returned. These women are not going anywhere.

The woman in the middle has not stretched her arms in defiance. They have been raised to invoke the mercy and pity of an inscrutable God. She stands, hands in supplication, dour acceptance. She is praying I think, praying for mercy, to a dome that she thinks must not now remain silent and hesitant. The woman on her left is looking at her with a mixture of awe and expectation, as if the God that has abandoned all of everything has taken residence in the tall, sturdy and somewhat defiant figure of this women. She offers her hope but also causes a tremor of terror. Who knows who she is, the meek little woman thinks, as she sits next to her son, the only sign of her world. He is shaded by his mother, I hope his mother.

The two other women, wearing cloaks or burqas are willing to believe again, trust again at that distant sign of hope, of God and all his promises. The one who is sitting is tired and not so sure, the standing one has a purpose and is willing to begin again.

I do not want to believe that they are just beggars, who after a day's begging have petered into dull unease. They are the real victims of oppression, of wars and destruction, widowed, fatherless, their sons have been killed, their husbands missing in action or just reported as disappeared. The landscape that they face is familiar to them, it is theirs. The clouds are not courting the mountains but haunting them. The unease of everything is personified not only in the valley shown but in the very isolation of these figures. These people have been left behind, they are alone, no one will comfort them.

The woman in the middle causes the valley around her to listen to her cry. She has come from many worlds and has seen the rainbow split. Beneath her feet have rained little pools of blood, of little rivulets that later dig deep tunnels underneath. In one of those graves, dark and endless lies the son she loved most. Were she to turn her face towards us, I expect a gnarled lined face, desolation and hopeless eyes and just the hint of an inscrutable smile.


(The photo above is by the famed Henri Cartier-Bresson. I have only tried to see the photo. There are surely other stories.)
Posted by Kubla Khan at 3:02 pm

wonderful 'reading' of the picture, kubla. you know, when I see a photograph like this (and it happens often with Cartier-Bresson), I become instantly thoughtless, it is like a blow to the heart. I am the more grateful when someone manages to write such a poignant story about it. it is difficult to write something that does justice to this picture, but you did. I especially liked this: 'The woman on her left is looking at her with a mixture of awe and expectation, as if the God that has abandoned all of everything has taken residence in the tall, sturdy and somewhat defiant figure of this women.'

The figure in the middle is intriguing, a bibilical figure, some one from very dark mists. obviously, my reading is actually a 'forced' one, dependent on what i was feeling like at the time of writing.

i have known this photo for years now. something about the outstretched hands, the very gauntness of the figure bothers me. it intimidates me. it is not surreal, it is quite real. that is the greatness of this pic.
and thanks.