The Unbearable Sensuality of Chabrol's Cinema

Claude Chabrol's cinema is rightly regarded as the cinema of ambiguity, to which I add that his cinema is also the cinema of style. And his muse, Stephane Audran, who was also his wife, starred in a few of his movies, called the Helene Cycle, is the goddess of style. Chabrol demands, and this is clear after you watch one of his movies, that one pays close attention to what we see, for a lot goes on in a Chabrol movie. Seemingly about serial murders as in Le Boucher or about a wife's infidelity, what Chabrol does is to peel away the surface and reveal the hypocrisies underneath. In a sense, unveiling bourgeois hypocrisy using the detective genre is achieved with mastery and class by the great film maker. Personally, I have always felt that great literature and great movies can achieve great results using the detective method and crime to allow the development and perhaps realisation of bigger themes.

As I mentioned earlier, we must watch his movies with intense attention, which is sometimes not possible. The bigger picture is in small details and it is possible that such details can be discerned on multiple viewings only. As soon as a Chabrol movie begins, we are immediately surrounded and assaulted in all of our senses by the most sensual of images and by a soundtrack that not only causes us to see but feel the atmosphere. Chabrol cinema, I am compelled to say, is the cinema of senses, a sexy cinema. The most mundane detail and the most trivial event is filmed with great aesthetic charm, conveying the feeling sometimes that style is more important than substance. Any unpleasant thing to be done must be got over with quickly, it seems. Consider the murder in Le Biches, where Frederique is stabbed by Why. It is done in a charming manner, as if Frederique is willing to be murdered, as if excessive force and excess of blood would revolt the sensibilities of the murdered and the murderer.

Sometimes watching his movies becomes unbearable. To a great extent, this must relate to the relation his characters have with their surroundings and the surroundings to the viewer. There is a mathematical precision to the images, so that every single move has not just been carefully rehearsed but that each move has a philosophy behind it. The unbearable sensuality is actually quite intellectual. By that I mean that the imagery has a purpose and is not just random. What is described as a thriller in relation to his movies or as suspense is a very intellectual one indeed. By suspense, if the actor doesn't know and we know is not the same as if both don't know. And anyway, the concerns of his thrill are far more ramified than any wife sleeping behind her husband's back. 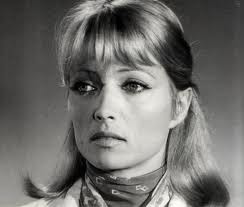 becomes remote and simultaneously extremely mystifying. The Helene cycle cannot be imagined without Audran. Her looks apart, she comes across as very accomplished and intelligent as an actor who is able to project the persona of her character on to her and vice versa. In Le Boucher, when the head mistress walks with Popaul to her school, cigarette dangling from her lips, in a wonderful one take six minute shot, she appears as if she is walking on a Paris street or on a catwalk. She is able to endow the most mundane character with the most electrifying charm.

I was very impressed with Le Femme Infidele, for what is a husband suppos 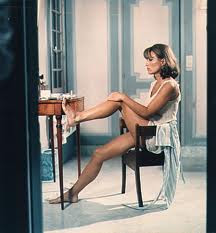 ed to do when his wife is having an affair? Ordinarily, all sorts of usual things happen but here, the bourgeois crust is left untouched as the husband confronts his wife's lover at his home and then accidentally kills him. Such things are however not whispered at home and life must inevitably move on till other conclusions are reached. In Le Boucher, when an ex-army man starts killing women in a quaint village, the teacher to whom he has started an attachment with, and who refuses that, after suspecting this man refuses to tell the police about her suspicions till the end, which is dramatic.

In Les Biches, there is a menage a trois, and a very subtle reconfiguration of relationships. There is the emphasis on class distinctions and hypocrisy and how people can be used in relationships but there is also the seething geometry of imagery to which I will return again. Stylistically, Le Biches is beuatiful. T 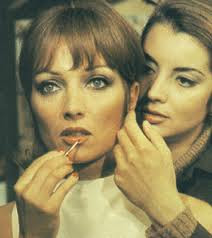 he opening shot, when against the backdrop of the Seine, Audran steps into our sights, haughty and beautiful, chillingly so and later on at St Tropez, with Why and her chorus of jokers, which acts as a commentary on the action within it. I must admit that of the four Helene movies, I didn't like it the most, for sometimes the actions and movements seemed very artificial and jilted. It is possible to see this trait as a projection of the relational dialogue within the movie but on the whole, it did seeming jar at times. Why becomes Frederique after she has loved her and as both love the same person.

La Rupture follows the travails of a mother's battle to keep possession of her son against the dirty and slimy tricks of her father-in-law who employs an equally detestable character to defame her so that the court can decide against the child's custody. Audran plays a mother in torment but does it really well. Our sympathies are with her and the man hired to defame her is very slimy indeed. In the end, he gets what he deserves but the end is very psychedelic indeed. An image of a balloon peddler is chillingly unforgettable. This movie has a chorus too in the form of tarot playing ladies in the boarding house where Audran resides and their role assumes some significance in the end.

Coming back to the point of unbearability. I think while watching these movies, what strikes is the distance Audran has from the surroundings. She is mesmerizingly seductive in her own way and aloof in that seductive charm, as if what is going on around her has nothing to do with her, as if everything is a game. She is a study in detachment. It is this alienation, this estrangement from the surroundings that make the movies unbearable, for want of a better description. The rising tension rises from her, for she is never histrionic, never over-dramatic. This enhances the drama, the sinister drama of the movies more. In a way, Audran is more credible than a Hitchcockian character for the latter is usually in some kind of an inner existential or melancholic crisis. Audran's crises are far more subtle, based on instinctual relationships with others, her surroundings, and her own crazily mystifying beauty, which is a mix of seduction and intellectual beauty. The Helene Cycle is a great contribution to cinema by Chabrol, whose reputation is now more art house than it was during his life time.
Posted by Kubla Khan at 3:14 pm

Beautiful. You've encouraged me to dig out some more Chabrol and give it a watch. Thanks much for this post.

There is a very well written book on Chabrol by Austin called Chabrol, simply. I found it after watching his movies. I intend to devote a post to this book.It has some instructive essays on the Helene Cycle and Le Ceremonie.

I hope you are doing well.

What a great resource!

I am doing research for my university thesis, thanks for your great points, now I am acting on a sudden impulse.