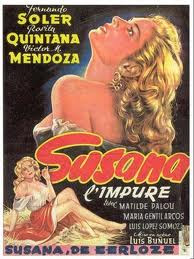 Luis Bunuel's Susana is generally regarded as one of his lesser movies though I would go on to say here that he only made great movies. However, it is true that Susana is not so well known, though it has all the trademarks of the great director and perhaps raises more questions than one might think otherwise. Susana was made during the master's Mexican phase and is shot in black and White. It has some surreal tricks but on the whole it has a more straight forward narrative than one would expect in a Bunuel movie. Susana is a movie wherein Bunuel subverts the Gothic genre but also makes the movie as a kind of a morality tale. However, even on a not so close viewing, it is obvious that the director is not content in just narrating a tale but in laughing at a few widely held "male" conventions, and also certain aspects of Mexican and Catholic constructs.
Susana is shown being restrained and then thrown into a cell in a reformatory wherein this young woman soon realizes that for company she has rats and scorpions. It seems clear that Susana had escaped and has been apprehended. She is being punished. Susana, terrified, prays to God and cries his help and soon flies out of a iron window in the wall, after a cross shaped light throws a reflection on the floor. Outside, it is a virtual deluge and soon she takes refuge at a hacienda, wherein a kindly looking family give her bed and food and kindness. Susana is however not welcome to the elderly maid who sees in the rain and in Susana's appearance a bad omen, a devilish act.
Susana is blonde and beautiful and it is soon clear that she is about to create havoc in this household as all the three men, the master, his young son and ranch hand all fall for her. Susana's goes in a well planned manner to seduce all three, creating friction in the household. However, the ranch hand gets to know that she is an escapee from the nearby reformatory and blackmails her into loving her. Susana uses one against the other and eventually her identity gets revealed and she is dragged, virtually back to the reformatory. We never really get to know why she had in the first place been incarcerated there and what her crimes are though it does seem that she might somehow be mentally unbalanced.
Bunuels' concerns are not mundane however. In this story gets woven the male machismo that seems to be the male prerogative and how all of Susana's actions are attributed to the devil, she herself being devil incarnate. The spectre of a temptress somehow excludes the possibility of a male allowing himself in being seduced, for the male character somehow cannot innately resist temptation. Bunuel, I think, plays on the Adam and Eve story of Adam's gullibility, absolving him of all blame can be quite tempting. In this case, Bunuel clearly also brings in certain elements of Mexican Catholic narratives to show the viewer how background political and social realities allow the exploitation of women and how strong willed female characters, which usually Bunuel shows, are seen as a sign of unrest and rebellion against the established order of men, church and piety.

Susana has some key note Bunuel trademarks of leg shots though in this case, Susana uses her bosom to unveil these hypocrisies. As regards narration, the surreal trademark shots are less in evidence though the drama hinges within a household and almost reads like a detective tale. Susana is essential viewing for Bunuel devotees.
Posted by Kubla Khan at 7:08 pm