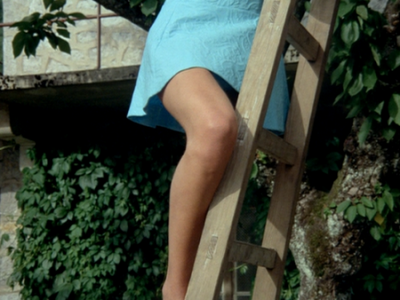 "There are things you hear and things you see, and the rest is supposition.”

As I stated in a previous post on Rohmer's movie style, talking and chatting are the essence of his 'thought' evocation, for essentially, Rohmer's world is where thinking begins and actions stop. Actions may still exist but they stem from thoughts, after thinking. In Claire's knee, as in his other movies, the main characters are away from their usual habitat and for various reasons on vacation. This time,, it is near the Swiss border on a picturesque lake. Jerome runs into possibly an old flame called Aurora, who is lodged with a family, as she is trying to finish a novel. Jerome is a career diplomat and has come there to sell his villa. So far, so good. Jerome is the kind of character that I immediately warmed to, for vague reasons really, not because he is fully bearded but perhaps because he seemed to have a lot of time on his hands, and appeared relaxed. Jerome informs Aurora, whom he has last seen in Bucharest that he is getting married to a woman called Lucinde.

Aurora introduces Jerome to a young girl called Laura, who is the daughter of her landlady. Later, Aurora, herself not unattractive, informs Jerome that Laura may be in love with him. Jerome finds that amusing but at Aurora's insistence, decides to play a game so that Aurora can use what happens as material for her novel. He laughingly assumes the role of a guinea pig for her, as he claims. Laura clearly seems enamoured of Jerome and it is clear that she is looking for father figure, as she herself declares. On a hiking trip alone with Jerome, Jerome kisses her but Laura stops him, saying that she wants more than friendship. Later, Jerome claims he will not play the guinea pig for Aurora. Soon after, Claire, Laura's half- sister arrives and to his own dismay, Jerome falls for her. Claire is young like Laura and whilst picking pears on a ladder, Jerome seems to get attracted by her knee. Soon afterwards, Jerome declares to Aurora that usually possession leads to desire for him but in this case, desire is asking for possession.
Initially Jerome, in his numerous chats with Aurora and Laura declares that he has found in his fiancee Lucinde, the woman with whom he is never bored. While he might still be attracted to other women, it is only with Lucinde that he feels fulfilled. But in his first meeting with Aurora, he declares "Why would I tie myself to one woman if I were interested in others?”, though later on he is clear that Lucinde is really made for him. During a chat with Laura, he shows her Lucinde's photo and admits that she is not his type physically but immediately says that “Though I don’t really have a type. Looks don’t matter to me. It’s the character alone that counts". However later, he declares his passion for Claire, who is long legged and pretty. He admits that Claire is not his type. In Laura he finds a girl who challenges his opinions, especially about character and in Aurora, he finds a kindly ear.

In his desire for Claire's knee, he makes it clear that were she to throw herself at his feet, he would disregard her but that only in possessing her knee would he feel that he had liberated himself from exploring this desire. Much earlier Jerome declares that life is too short to notice adolescent yearnings but he does notice Laura's yearnings acutely. Jerome tells Aurora that any woman can be approached through either a caress on the neck or arm or a kiss on the cheek but in Claire's case, it is her knee. When he does finally get his opportunity, he fondles and strokes her knee and Claire lets him do it. It is an intriguing scene, not only for the two of them but for the viewer too, and one wonders where Jerome will stop or how Claire will react.

Claire's knee is a magnificent movie and in this vacation spot, the main characters meet, have tea, walk, are on a boat, inside a house, indoors and outdoors, talking and walking, chatting and getting angry at each other, compromising and philosophizing. In essence, one or two Rohmer characters in all his movies are the philosophizing type. They are not philosophers but the talking type, those who talk about things when they are actually talking about themselves, who give examples of things 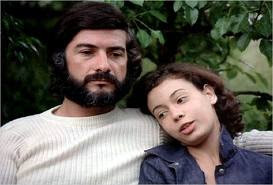 when they are actually speaking from their own experiences. That they contradict themselves from time to time is evident but more importantly, they seem to at least outwardly arrive at some outer conclusion.

Jerome is a brilliant example of the talking type. Sitting or standing, dressed casually and hatted, Jerome is the quintessence of the moralizing type. He never ceases to give an opinion or reflect from his past experiences. He always or usually has something to say or advise. He advises Laura to study in Paris or Lyon and advises Claire to keep away from loutish boys. He knows he is always away from making a mistake but admits that it is possible to do so. He never seems to be in a rush or hurry. He is generally polite and very lazy in his demeanour. Jerome is also a bit of a hypocrite and seems to justify his own lapses. He never admits that he is completely wrong and always justifies his weakness or some behaviour with a theory. His explanation of his desire for Claire's knee is nothing short of a psychological formulation but actually quite misleading.

The other characters are brilliantly portrayed by all the actors including Laura, who is simply scintillating. She is the Rohmer woman par excellence, very wise and maturing with experience, while Aurora is already worldly and wise. The locales are as in other Rohmer movies, sun and shade and naturalness are important ingredients. The moody analysis of desire and its undercurrents are discussed against a background of summer grass and pear trees and motor boat cruises on placid lakes. I think Claire's Knee is such a subtle and important movie that I must see it many times before I can actually appreciate the intense psychological implications that are more hidden than visible.

i am marvelling again at your deep knowledge about films, and sensitivity - all these reviews are a delight to read! how long does it take for you to write one post? do you write it immediately after seeing the film? otherwise how could you remember the details?
unfortunately i haven't seen many of these films - i have seen the Bunuels but long ago so i couldn't possible come up with important arguments without watching them again.

why do you say: "Jerome is the kind of character that I immediately warmed to, for vague reasons really, not because he is fully bearded but perhaps because he seemed to have a lot of time on his hands, and appeared relaxed" - i found this funny, the first reason that popped into your head could be related to his being "fully-bearded", why should this be a criterion to like or dislike somebody? or is your judgment made in the context of the film, where this appeareance detail plays a role?

actually i remember seeing a Rohmer, Autumn Tale it was, but also many years ago. i liked it, but i couldn't say it is my type of cinematic style.

I do not usually jot down these impressions immediately after seeing the movie but always, always, a few days after. I do remember some words that I quote only because they must have made an impression. I write these pseudo-reviews only because something pressurizes me to share it with someone, and hence here. Also because I am not reading much these days and my so-called poems have dried up.

Jerome is very unconventional in appearance. He is in his late thirties or early forties, a bit portly and bearded. He is not exactly a French model.His unconventional appearance made him more 'apparent' to me. Also, importantly, Jerome never hurries even when he should. He is seldom bothered and seemed relaxed always. Hence, I really liked his exterior charms. Jerome is clearly a psychological type. Also, thinking now, he resembles a relative of mine!

As regards cinematic technique, Rohmer is different to Godard or Chabrol say but I do really like the Rohmer technique personally because all my life, I have known the talking types. I may not agree with all the results he gets.

Sorry, as regards how long it takes for one post, well, not really more than half an hour usually, for I don't really write them but 'type' them in a conversational style really. I will not call these posts as writings. But yes, I do tend to talk like this. I am a sucker for prolixity.