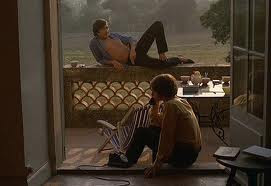 I somehow prefer the French title to the English Collector but any way, Le collectionneuse is another of the Contes Moraux of Rohmer's. I must admit that watching these movies has been a privilege and in many ways, I have remembered my own hypocrisy and self deception. I wish Rohmer had made many more moral tales. This movie intrigued me as much as it attracted me for here, the male characters are far more smug than in the other tales. The main character Adrien is on holiday at a friend's house in a 17th century villa in St Tropez. Sharing it with him is another friend called Daniel. Adrien is a middle man in the art collection business, he wants to set up his own gallery. Adrien is handsome and has a girl friend who refuses his invitation to go with him. Daniel is a painter and the two get along very well. We have all the ingredients of a Rohmer tale here, summer vacations, picturesque surroundings and the protagonists tendency to philosophize.

Adrien, as narrator, makes it very clear that he prefers inactivity to work and that his life is his work. He finds a perfect foil in Daniel in that the two don't even think of disturbing each other. Daniel seems to be the thinking type while Adrien is the thinking as well as the talking type. Daniel considers thinking as work too but Adrien prefers to read so that he doesn't think. Daniel however considers even reading to be work. Into this lazy world arises a disturbance in the firm of the attractive Haydee, a young woman who is also a friend of the villa owners. Haydee arouses Adrien's curiosity more than Daniel's, but for both of them, she seems a challenge. Haydee challenges them indirectly in that she seems to be with a new boy every day, who either pick her or drop off at the villa. The two men actually call her a slut, for it is clear that she challenges them sexually. Adrien wants Daniel to sleep with her but Daniel will have none of it. Adrien thinks that Haydee is going down the ladder as he sees her with a new boy every night though Haydee sees it as part of her search for something.

Adrien wants Daniel to sleep with Haydee and one day it does happen. Adrien then thinks that it happened because he had tested her and that they both did it because they wanted to test him. Everything that happens must involve Adrien even if remotely. Adrien later sets up Haydee with Sam, the art collector. Daniel dumps Haydee which Adrien observes with satisfaction and then approaches her to give her support which she rejects. Adrien wants in the end to sleep with Haydee which Haydee would not mind but Adrien believes that it is Haydee who wants that. Later, on their way to the villa, after Haydee has accidentally broken Sam's costly vase, they run into her friends who invite her to another town. Adrien waits in his car but because he is blocking traffic, he has to make way for another irate driver. In that incidence, he leaves Haydee behind. He thinks he has left her behind but he uses that as a factor of his will.

Of all the male characters in the moral tales, Adrien is not only the most handsome but the most smug. He attacks bourgeois life but he is a bourgeois himself. He knows he is good looking and thinks he can have the girl he wants and not who wants him. He is 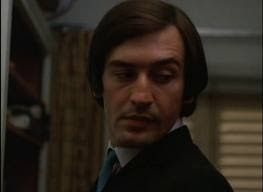 interested in making money but pretends he is interested in doing nothing. He prefers the company of others but believes he likes his own company. He uses others to test his own limits believing it is fair to do so. He is articulate and intelligent and has a beautiful smile. Some of his witticisms are brilliant like : "What I don't want is to think my own way. I want to be led". He is well read but pretends he is not. He has an anthropologist's approach towards people; he tells Haydee that he would not stroke a woman's legs if her nose was ugly. He knows he is a dandy but he is the philosophising dandy. His self absorbed attitude is attractive though he is extremely selfish too. He attributes to willpower what should be attributed to chance. On the whole, he is willing to surrender to Haydee in the end but he does not know that he had already done so.

Daniel is the most withdrawn of the three. He prefers solitude and self awareness. He is not as articulate on a daily basis as Adrien but he is arti 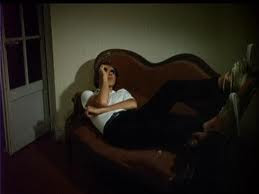 culate spasmodically. He tends to speak when he wants to under a certain pressure. At one point he says : "People who are always thinking don't exist." Daniel is not willing to be an in Haydee's collection but eventually he ends up being just that. He shocks people merely for the value of shocking them. He is interesting in so far as he let's himself be. He is funny at times. He knows the games Adrien is playing but he couldn't care less. He prefers to be 'on a high' with himself. In the end, he is as self deceptive as Adrien. And as disappointing.

Haydee is not as articulate as other women of the moral tales. When she is introduced, she is walking along the sea shore, clad in a bikini. She lets her looks do the talking. She is pretty but not beautiful. Her smile is worth a million dollars though. She tends 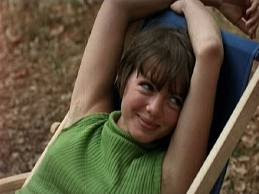 to reply insults with silence. She is seemingly dumb but she never let's you know what she is thinking about. She is impulsive and has no loyalties to any one apparently. She is disturbed underneath the promiscuity and she disturbs others randomly. She is quiet and well mannered but capricious and mysterious. Overall, she is not as wordly wise as the other two. She is an observer and soaks much and gives little. She is not the usual Rohmer talking woman.

Le Collectionneuse is a wonderful movie in many ways. It catches the sexy bohemian attitude of the main characters in an unforced unassuming manner. The way the villa is transformed by the attitudes of the three people and the sometimes visible tension between them is caught with subtle effect. The morning and siesta scenes are beautifully filmed and the conversations on the veranda or on the beach have the feel of 'real time' chats. One particular scene when Haydee and her 'boyfriend' have breakfast with Adrien and Daniel has impossible comic elements and charming wit and repartee. Here Adrien, on being asked what he does for work replies that he is an eye specialist, with such dead pan sincerity that the other two burst into laughter later, when Adrien tells Haydee's friend, who is wearing Polaroid sunglasses that polarization is already extrapolation. He advises him to wear Daniel magenta glasses which he, Adrien has prescribed. Basically Adrien and Daniel play the goat. One scene between Adrien and the art collector Sam, with Haydee observing them in silence turns vicious after Sam labels Adrien as a school child on vacation.

Waiting to unite with one woman while falling for the second one till you meet the first one is as much as basically happens here as in other morality tales but to sum it up like that is the way of a novice. Much more happens during the absence of the 'loved' one and the presence of the 'temptress'. I do not know if Rohmer has any sympathy for the male type though his female type emerges better.The performances by the three actors are convincing with only Patrick Bachau being a professional. I have read that Rohmer has been described as a conservative moralist because of his conclusions but that will be the aim of another post to consider. The camera work of Nestor Almendros in all of the morality tales is as important as the directorial role. The casual ordinariness of the images adds to the verbal grandeur of the dialogues.The colour schemes in this movie are refreshingly subtle, like water colour paintings done by an artist on drugs. Overall, Le Collectionneuse is a sexy movie that I will see again, and after that, again.
Posted by Kubla Khan at 10:59 am

Get daily suggestions and methods for making $1,000s per day FROM HOME for FREE.
SUBSCRIBE NOW