Elias Khoury's Gate Of The Sun

Elias Khoury is often compared with Tolstoy for the range and depth of his works. His most famous novel, Bab El Shams or Gate Of The Sun in English has been translated into a few languages including Hebrew. Khoury is Lebanese and Christian but importantly an Arab and is generally considered to be an important Arab writer. This novel is an ambitious plan to convey the stories of dispossession, of displacement of Palestinians after Israel was created. 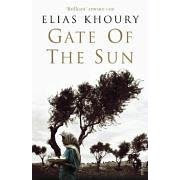 Khoury visited the Palestinian refugee camps in Lebanon for stories from a previous era for he had not witnessed those himself. To write is to act, to transcribe on paper is to prevent an oblivion of these stories, stories of loss, disgrace, pain, exile, heartbreak and the loss of identity and one's home. Susan Sontag describes in an essay how true Literature must reflect the past, the memory of the lost past and not dwell on the immediate present. That gives Literature not charm but grace, not topicality but breadth, humanity and not bravado. On these scales, Khoury excels, and does so remarkably, passionately.

This is not a polemical Palestinian novel, this is not rhetoric, this is not blame but a remembrance of the nakba, the disaster, the catastrophe that Palestine suffered. Because these stories might be forgotten, ordinary stories of ordinary people, Khoury writes them down in a prose of such hesitant beauty, such melodious music and profound melancholy. The novel revolves around stories told by the narrator to an aged Palestinian fighter lying comatose in a hospital. It is a reversal of the Arabian nights for here, the narrator wants to save the dying man's life. The stories reveal the heart wrenching stories of loss and separation, of love and disaster. The fighter is reminded of his wife, whom he used to meet outside a cave called Bab El Shams.

We are told of their courting, their romance, love making and so on, for as important as politics is here, which is there for granted, Khoury takes the task of story telling. Stories of normal people not of myths for the myths are different and are not considered here.

This novel won the Palestine prize and is regarded generally as an epic, brilliant, monumental and groundbreaking. Khoury has been associated with An-nahar, a cultural edition of a Lebanese daily, besides being directly involved with Palestinian politics. This is narration on a grand scale, beauty and pain, joy and despair on the same page. This novel must be read to be felt, for these stories of loss transcend nations and cultures. This novel is unlike anything that Handke might ever write, even though the comparison is wrong. The final lessons, if there are any, is to recognize and feel the awfulness of violated memories, of not being allowed to even voice the pain of pain, of suffering. For the general experience of displaced people worldwide, their voices get drowned amongst the cacophony of fraud messiahs. It is only poets and writers who can save them from fanaa, from total annihilation.

A link to a movie based on this novel here, and and an article by Jeremy Harding here.
An excerpt from words without borders.
Posted by Kubla Khan at 7:25 pm