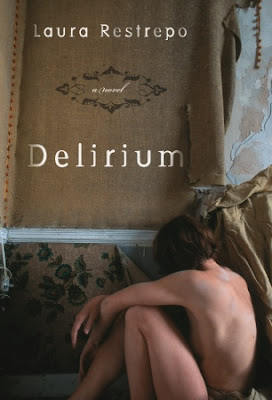 Laura Restrepo is a South American writer who is not yet as famous as her other contemporaries, at least not in the Anglophone world. She has won numerous prizes, some quite major and her novels have been translated into various languages. From Colombia originally, she lives at present in Mexico. I came across Restrepo's work on the Internet a few weeks ago and decided to read Delirium, a novel described by no less than Jose Saramago as one of the finest in recent memory.

Writing a great novel in the form of a detective story or a mystery is not a new concept. The Savage Detectives by Roberto Bolano, Sultry Moon by Giardenelli, the master Borges himself and numerous others have attempted so. My particular impartiality towards Latin American literature apart, I find that this merging of literary anxiety in a detective story achieves all that real writing can and should.

The story is told through multiple narrations, each from the perspective of different characters, each narration mingling with and preceding the other, enhancing the meaning of the previous one. It involves an ex- university professor's wife Agustina going mad, losing her memory and turning insane quite suddenly, after her husband Aguilar returns from a business trip. Aguilar is told to pick his wife up from a hotel room and he begins his investigations as to his wife's breakdown. The other narrations involve Midas , Agustina's ex- lover, now a drug dealer, linked directly to the real Colombian drug baron Pepo Escobar.


The recent events of Colombian history, its political, social, economic and cultural events are a background against which the story unfolds. Agustina is described by her husband and from her own perspective as having visions, with the ability to foresee events in the future. This adds another dimension to the story, for we are left in the realms of speculation as to the reality of her symptoms. Being a rationalist himself, Aguilar never believes in his wife's supposed powers but tries to construct her persona through various narrations and after building her story up from the accounts of other's too. Agustina's Aunt, who drops in at their home suddenly to help adds another dimension for she claims to understand her neice and her illness. The stories are also narrated of Agustina's upper class parents, her Grandfather also who it seems had some form of mental illness too.


The style and prose is lyrical, taut, full of suspense and narrated in a complex and at the same time in a cyclical manner. Midas , for instance speaks in a street smart, sing song, waxy and musical manner. I found those sections very engrossing indeed. With Aguilar, we have sympathies for we want to unravel the mystery of Agustina's sudden illness, her Delirium. When you read Restrepo, you find a certain familiar tone here and then you realize that this prose, this narration and the actual style is profoundly influenced by Saramago. The sentence constructions, the small speeches are interpersed with the narration, without warning, and we have sentences ending in small wistful sad speeches or words.

This is a tale of terror, an inner terror told without hurry for the reader, along with Aguilar knows that something more than Delirium is affecting Agustina but what? And because of the other narratives, a kind of meta-narration adds to the air of mystery that Restrepo weaves with such mastery, for we have to go back in time incessantly, to Agustina's grandfather, her Mother, her Aunt Rosa, her Aunt's affair with her Dad and the threatening shadow of Midas himself, which hangs like the shadow of political uncertainty around Colombia itself. This is how Aguilar describes his wife Agustina.........

since the dark episode my wife had succumbed to slovenliness in matters of appearance, everything yielding to the pure centripetal force of her introspection.......Madness is navel-gazing, my wife spends days and night in pajamas, or at most a sweatshirt, forgetting to eat, to listen, to look, as if her entire horizon of events is contained within herself. i am trying to reach into the quagmire of madness to rescue Agustina from the depths, because only my arm can pull her out and save her from drowning.
Agustina, my beautiful Agustina, is shrouded in a cold brilliance that signals distance, behind the barred door of the delirium that won't let her out or me in.

I was amazed to find a review of Delirium here. Immediately after reading this novel, dated September 1, while there was nothing much I could find before I bought this book. As symbols go, Agustina's story can be read at multiple levels, with its obvious political and social elements that have affected Colombian history recently, with her Delirium the country's Delirium too. Here I admire Restrepo for her attitude, style, sympathies and politics is revealing and understanding. Within the remit of a detective story, she has made it possible to narrate a difficult chapter in recent Colombian history. As to its style, fans of Saramago will admire its subtle poetry, incessant air of loss, of an upheaval, of an extra sensory air of perception that hangs around the whole story. While the influence of Saramago is clear to me, we must say that this is a new voice, clear, candid, poetic and wistful. I will not mind reading more Restrepo and would encourage the lovers of Latin American literature to add one more voice, if they haven't already, to the list of this great literary tradition.
Posted by Kubla Khan at 6:38 pm

Writing a great novel in the form of a detective story...

You might also enjoy Story of the Cannibal Woman by Maryse Condé.

L Restrepo is one of the best latianmerica writers after the Realismo Magico boom.