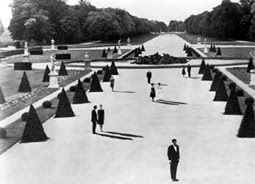 I walk on, once again, down these corridors, through these halls, these galleries, in this structure of another century, this enormous, luxurious, baroque, lugubrious hotel, where corridors succeed endless corridors--silent deserted corridors overloaded with a dim, cold ornamentation of woodwork, stucco, moldings, marble, black mirrors, dark paintings, columns, heavy hangings, sculptured door frames, series of doorways, galleries, transverse corridors that open in turn on empty salons, rooms overloaded with an ornamentation from another century, silent halls ........

This is how the narrator starts to take his grip on us as he begins speaking in slightly hushed and later more raspy tones. The movie Last Year In Marienbad begins with a melodious, long tracking shot of this hotel described above, and we are seemingly at a loss as to what is going to be shown. Released in 1961, made by Alain Resnais, this movie was released to critical acclaim. It has created a raging debate since then. The new wave of French cinema was going hand in hand with nouveau roman, in the literary world. To this debate was added this fascinating, timeless movie. I read a review of this movie in Sontag's essays and that encouraged me to watch it.This movie is based on a novel written by Alain Grillet, who seems to have been inspired by another Latin American novel. This movie is profusely reviewed on the Internet. My post is just a homage.

As the movie progresses, we see the same corridors again, the hotel in all its somber majesty, its faded but charmed brilliance and the voice..............

Between these walls covered with woodwork, stucco, moldings, pictures, framed prints, among which I was walking--among which I was already waiting for you, very far away from this setting where I now stand, in front of you, still waiting for the man who will no longer come, who no longer threatens to come to separate us again, to tear you away from me. Are you coming?

As we progress through this maze, we get to understand a bit of the story. A man, called X, is trying to make the beautiful Delphine Seyrig, A, remember their affair at Marienbad last year. It seems that A is married to M, though it is not clear. A refuses to believe X or any reference he makes to their affair. She denies ever seeing him, telling him it might have been Frederiksbad and not Marienbad where they might have met. X spends the whole of the movie trying to persuade A to remember and A seems genuinely distressed with his approach at times. M spends time in playing numerous card games, including the matchsticks one, which he always wins. The movie ends with A accompanying X but it is not clear whether they are going together. I am still reeling, after nearly 24 hours of having watched this movie, from the hypnotic effect of what I saw. The first shot, long tracking, slow melodious with X speaking in the background is simply mesmerizing.

The incessant repetition of what I have quoted above adds to this trance, aided superbly by the haunting ambiance of this hotel, captured majestically. Some scenes are wonderful paintings, and I paused many times to just look and take in the effect. The most famous scene is in the gardens, long shot from a distance, actors just standing, shadows looming ahead, like statues, merging with the trees, fern and foliage. I think the acting is stilted, cardboard like, with actors just like cardboard like figures, like statues, but that is exactly what is required. I do not think it is a very difficult movie to follow but was amazed at the different interpretations this movie has inspired. One, which seemed quite far fetched is that this movie expresses the anxieties of the nuclear age. I personally think that this is a meditation on time, on memory, on loss of time and the unbelievable effects it has. It is perhaps also a deconstruction of memory and an attempt to piece together events that happen, from external aid, from another person as to the actuality of what happens. In other words, multiple perspectives about a single situation, or a past event, re-examined after some time do not seem the same.

It seems there is something that did happen in Marienbad last year, and the female character is afraid of thinking about it. In other words, she is trying to repress something, and one cannot be actually sure what it is. Critics have talked of rape, sexual aggression and so. The role of M, possibly her husband is intriguing, for in the end, he thinks the two of them cannot live together.

Even if I am totally offtrack here, I think I will not hesitate to watch this movie again for it draws you in, which movies seldom do.It does not matter what this movie means. What matters is the fantastic, almost eerie meditation on time, memory, love and loss that it deals with. To the psychologically dark, restless corners of the mind, to a seething mind, to a wandering mind, to a restless heart, this movie is an ode.

You want to wander yourself through the labyrinths of Marienbad, through this baroque hotel, you want to be a part of that furniture, just stand there, just get lost in the freezing, solid statues and the crumbling sands of time.
You want to be left behind in that hotel, in Marienbad, and not wonder about meaning and psychology, just stand next to A, look at M playing his games and listen to X as he says.....

I walk on, once again, down these corridors, through these halls, these galleries, in this structure of another century, this enormous, luxurious, baroque, lugubrious hotel, where corridors succeed endless corridors--silent deserted corridors overloaded with a dim, cold ornamentation of woodwork, stucco, moldings, marble, black mirrors, dark paintings, columns, heavy hangings, sculptured door frames, series of doorways, galleries, transverse corridors that open in turn on empty salons, rooms overloaded with an ornamentation from another century, silent halls .................
Posted by Kubla Khan at 6:41 pm

wow, i haven't seen it in a long time but I remember being mesmerised by it too. it is about memory and the whole instability of it. Did it really happen or did we just dream of it? and even if it did happen how do we reconcile different versions of what happened?

It is baffling but only if you look for facile psychological and behavioral explanations. It is abstract piece of art. the picture at the top so brilliantly captures the geometrical and formal beauty of it. also did you notice in the picture it is only human beings who cast shadows and not trees and objects?

Alok
No, i did not notice the shadows you mention, but will watch it again!
yes, this movie itself is a dream, did i watch it?
i agree with you entirely that it is facile to come up with explanations. the movie itself is enough.

Alok
No, i did not notice the shadows you mention, but will watch it again!
yes, this movie itself is a dream, did i watch it?
i agree with you entirely that it is facile to come up with explanations. the movie itself is enough.

it is there in the picture above itself... notice there are no shadows of the tress :)

I also love Resnais' other film Hiroshima mon amour. It is another poetic film though less abstract and inscrutable.