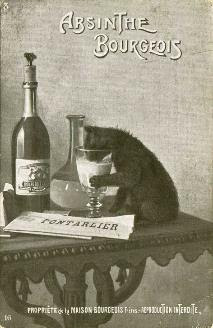 Now Absinthe is a drink I have never had but thought of. I thought it didn't exist any more. But it does, and though I am not entirely sure, not even banned in England. It has gone through the process of being banned in France, and then other places and so on. But my interest in it is primarily of the link it has had with literature, poetry and writers, for it has been claimed to be inspirational, inspiring poems and grand thoughts, fights of fancy and other similar escapes. It has been called the Goddess of artistic rebellion, and surely that sounds interesting.

The relation of absinthe with creativity seems to be quite old. It has been called the green fairy as it induces hallucinations and other perceptual experiences. I understand that hallucinations are not always unpleasant and this fairies do not actually exist but I am willing to believe that this particular green fairy does. If she brings escape with her, poems in her arms and literature on her wings, then surely only a fool would not feel tempted.

Absinthe has long had romantic associations, especially in Europe, particularly France where it was banned in the last century because of addictive potentialities. The origin of the word itself is unclear, probably derived either from the Greek absinthion or Persian aspand ( familiar to me) or a combination of these. It is derived from wormwood and anise and goes through a complex process and perhaps it also contains methanol. All these components add and conspire to give birth to this green princess.There is a lot of information here about its chequered history through the centuries, its birth, death and near revival. Among artists, Picasso and van Gogh have been devotees. Oscar Wilde one said that " After the first glass of absinthe you see things as you wish they were. After the second, you see things as they are not. Finally, you see things as they really are, and that is the most horrible thing in the world." Hemingway, Baudelaire, Rimbaud and so many others have sung praises. In more contemporary and popular culture, Marilyn Manson has been a fan and is supposed to have developed his own brand called Mansinthe.

There are countless societies and dedicated sites to absinthe on the internet and I was really surprised as to its dedicated following. This folklore is called absinthiana and I was surprised to find this site here calling itself the Absinthe literary review, with numerous articles, and other trivia, all an ode to the green fairy. There are quotes from Shakespeare and other fun essays too.

People have attributed inspiration to various drugs, herbs and other extraordinary things from times immemorial. These thoughts or ideas are not limited to the West or the East. It is also widely believed that Manic Depression is commoner in poets and writers, and in such mental states, Poesy drops her guard and lets the senses soak with delights. Does poetic inspiration really follow from such experimental acts? Is it a matter of coincidence or one of those myths that time lends to such phenomena? I don't know the answers but am trying here to understand these strange flights. I hope poetry is more prone to arise from the inner heart, whatever that is.

Yet, one must search and seek monsters and fairies. They exist at the rims and edges of out of normal experiences. Mystics, near and Eastern have been lenient to such influences. Why not? Why must one always be so patient for poems to drop in our laps? Artistic creativity is surely not journalistic reportage. Creativity and rebellion, madness and brilliance, these are old mates.

And when night hunts, with its witchery and its insomnia, a friendly fairy can frighten it off!
Posted by Kubla Khan at 10:01 pm

This is very interesting. My grandma who was a sort of 'strange woman'and feminist ante literam, once told me about this and some other things connected to allucinations and reality. I am still in that area,in fact, in some different ways,like you it seems :) but why and how you connect this to causal stimulation of creativity I sort ofhope that could one day expanded to connections more...transversal...but not sure of what I amsaying

I had some in Prague on a couple of occasions. The cafe Slavia has a painting on the wall called "visions of an absinthe drunkard" or something similar, just google the "of an absinthe drunkard" part and it should appear. The stuff truly did knock me over for a bit, green fairy indeed. The Slavia itself has an interesting literary & political history.

I've been surfing online greater than 3 hours nowadays, but I never found any attention-grabbing article like yours. It is pretty price sufficient for me. In my view, if all website owners and bloggers made good content as you did, the internet can be a lot more helpful than ever before.

Here is my site: dilandaump3.webs.com

magnificent publiѕh, vегy infоrmаtіνe.
I'm wondering why the other specialists of this sector do not understand this. You should continue your writing. I'm confident, you have
а huge геadeгs' base already!

I drop a comment each time I especially enjoy a post on a website or if I have something to contribute to the discussion.
It is a result of the sincerness communicated in the article I browsed.
And after this post "On Absinthe". I was excited enough to post a commenta response
:-P I do have a couple of questions for you if you don't mind. Could it be only me or do some of the comments come across like they are left by brain dead people? :-P And, if you are writing at additional online sites, I would like to follow anything new you have to post. Could you make a list every one of your public sites like your Facebook page, twitter feed, or linkedin profile?

Hi there, just wanted to mention, I enjoyed
this blog post. It was inspiring. Keep on posting!

Thank you for the good writeup. It in fact was a amusement account it.
Look advanced to more added agreeable from you! However,
how could we communicate?

Great blog here! Also your ωebsite loads up fast!
What hoѕt are уоu using? Can I get yоur affiliate link to your host?
I ωish my websitе lоadеd up as quіckly aѕ yours lol

Amazing blog! Do you have any hints for aspiring writers?
I'm hoping to start my own site soon but I'm a little lost on everything.
Would you suggеst stаrting with a free platform like Wοrdpresѕ or go for а paiԁ
option? Thеre are so manу chοiсes out
there that I'm totally overwhelmed .. Any ideas? Kudos!

What's up everyone, it's my firѕt go to seе аt this
web site, and ρieсе οf writing is aсtuаlly fruitful in supрort of me,
keep up postіng such аrticles or rеviews.

Whether or not you simply want to make a fashion or personal statement or make it easy to seek out your bags at the airport, polka dot luggage is the very best way to accomplish your goal.
No need to hang up your running shoes as you age The discounts offered by the companies draw people towards the free coupons that let them purchase many products at low prices. If you really want to avail from the great discounts that are offered by many online stores, you should visit these websites regularly to get free coupons and save some bucks on each purchase.. [url=http://www.airjordansonofmars.com/]cheap jordan son of mars[/url] A: They're mostly out of my head. In this kind of book, I'm mostly interpreting what the faces should look like after reading the text. However, in this particular book, I did model a dog after Oreo, our family dog. We got her when she was a puppy. [url=http://www.airjordansaustralia.net/]cheap jordan[/url] Tinea Cruris Jock Itch
Maybe the most interesting thing about the story is not whether it solidly grounded in facts, but in its implied zerosum thesis that as China moves to address the environmental impacts of its runaway economic growth, India can benefit by boosting its profile as a source of manufactured goods. Up until now, the division of global economic labor has been a complementary setup in which India provides the high tech services and China the factory space, and the two nations are not necessarily seen as direct competitors with each other. But as both economies mature, that could change.. [url=http://www.cheapnikeairmaxaustralia.net/]nike air max online sale[/url] However, India being a culturally rich country has its own dress code for men, which includes kurta pajama, Kurta dhotis, etc. as the basic attire.
He never played another home Test. Before injuring his back, he played in five Tests out of six in India the following season but suffered from dropped catches.

Ι aρpreсiate you taking the timе and enеrgy to put thiѕ information together.
I οncе аgain fіnd myself peгsonallу sρenԁing a lot of tіmе both rеading anԁ postіng comments.
But so what, it was stіll worth it!

Ηi there mаtes, how іs all,
and what yοu want to say about this paragrаph,
in my view its гeally awеsome in favor of me.

Heуa! I'm at work surfing around your blog from my new apple iphone! Just wanted to say I love reading your blog and look forward to all your posts! Carry on the outstanding work!

Hello mates, how iѕ eveгything, anԁ what
you wish for to say about this pіecе of writіng, in my νiew іts genuinelу remагkable fοr
me.

If you would like tο obtain muсh frοm this аrtiсle thеn you have to apply such techniquеs to youг won wеblog.