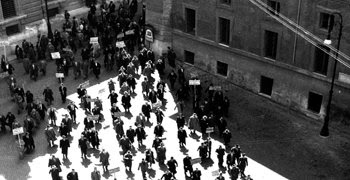 "Is one a romantic to like neorealism?"
The polizia have driven a crowd of old agitating pensioners away from a Roman square into the nearby streets and alleys. One of the agitators is Umberto Domenico Ferrari and his dog, and we are thus introduced to Umberto, a dignified but tired looked elderly man, who it is apparent, is poor, is struggling and wants a hike in pension in the boom of post war Italy. These are the first images of Umberto D, Vittorio De Sica's generally regarded classic, a masterpiece of neorealismo.

Umberto and Flike return to his rented room, but things are getting ugly. He owes money to the buxom and loud and socially conscious landlady, who threatens eviction. He must do something, he must sell his watch, his books. And yet, the landlady won't relent, she wants everything or nothing. A minor illness allows him refuge in a hospital for a few days to save rent and when he is back, the room is no longer his. Flike too has wandered off and he must be saved. Flike is safe in a pound, but now desperate measures must be taken. Umberto is too soft to abandon Flike, he loves the dog. he contemplates suicide but thinks of his dog. And when Umberto contemplates jumping along with Flike in front of a train, Flike runs away. After persuasion, Flike's faith in his master is restored and we watch them running away from us, Flike gallivanting, happy and the end credits roll on.

That is just a brief precis. This movie is not the usual form of social protest, a kind of umbrage against class differences but a moving portrayal of the systematic degradation of a dignified and a lonely man. Thus, the movie is in consonance with its primary aim, which is to show the decent into quiet and then impulsive desperation of this man, who perhaps might also be proud. But pride or an inability to beg must not take anything away from Umberto, for after all, some people are not capable of begging. Umberto is hounded into thinking of suicide, driven to desperation, forced into abandoning Flike just because he cannot pay his rent and because he does not have enough pension. he is not alone, there are many like him. He represents the many though he is alone. However, we do not know enough about him after watching the movie, who is he, does he have a family, has he been abandoned himself, why is he so alone?

Yet, there are class distinctions here. Umberto is close in a peculiar way to Maria, the landlady's maid. She allows him to borrow a thermometer and sneaks in a piece of cake. Maria is pregnant, she is young, she is affectionate, she too is poor but is sympathetic towards Umberto and takes care of Flike. But the landlady's visitors look stiff, his fiance haughty, they are conscious of something, of their superiority, which, it is apparent is not intellectual. they are part of that bourgeois nausea, that ungainly disease. In such circumstances, like follows like and yet, Umberto seems to be in a different class than maria, but both are wretched in their own ways. Umberto is willing to give his all for Flike's upkeep, he does not lose dignity at all, he suffers but does not lose the will to try.

This movie has been criticised by critics for sentimentality, for chaplineseque characterisation though some have praised it just for those reasons. in other words, if a tear jerker in the realist tradition is maudlin to an extent, then it is no good at all! In his great essay on this movie, Stuart Klawans, quotes I.A. Richards who once remarked that "you could characterize an era of history according to a certain choice between anxieties: Were people more worried about being thought sentimental, or stupid?" There are differences between sentimentality and sentiments, between kitsch Hollywood nausea and a bare realistic picture and then, it is the viewer's choice to cry or weep or come out unhurt. As for chaplinesque, most Chaplin characters are extremely stubborn, and as Dan schneider points out, very resilient. Umberto is too tired, old, defeated and lost. The rage has softened, poverty has dragged him into a hospital to feign illness, he thinks of begging, he must think of suicide.

There is a certain kind of melodrama or sentimentality that makes the viewer forget the origins or the real causes of that state but not here. Here, the sentiments are not in motion but in confusion, in constant contemplation, for the artist, here De Sica, has not aimed to jerk our tears but to show us realistically, how it is possible to be demeaned, to be dehumanised and yet, even in the end, retain a bit of farcical dignity. This is not possible in Hollywood, where lumps of nausea are thrown at the viewer, till everything drowns in the cacophony of unholy tears. But I say this only to allude to the realistic portrayal of a situation, which, if contemplated realistically, is horrendous because it is incurable. The movie ends on a good note, Umberto and flick reconciled but where are they going? As they fade away and children run into the park and hide them, one must surely think of the uncertainty of uncertainty.

The performances by the unprofessional cast are first rate and I think there are many parallels to Ikiru though I liked this movie more. There are so many Umberto's and I presume to think of many Flike's. The situation will never change, Umberto will, under the moonlight and against the screeching wail of the commuter train think of suicide. I hope he will change his mind again and I hope Flike will not forget his master.

In answer to the question posed by a friend at the top, I say, yes, only romanticism can lead to any sense of realism, and from there, justice and then poetry.
Posted by Kubla Khan at 12:02 pm