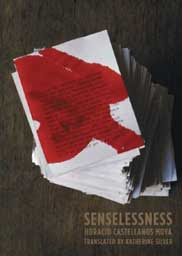 If the world of literature needs an affirmative text or work of fiction, if after barren days and nights the written word is asked to leap out from a dull page, look no more, for in Senselessness, written by Horacio Castellanos Moya, everything is achieved if everything can be achieved, fiction meets reality, politics and art, poetry and pain, and in the end the ever pervasive senselessness, the waste.

Senselessness is definitely the best novel I have read this year and this is an opinion shared with others. Translated by Katherine Silver and published in English just a few months ago, senselessness is the kind of novel for which the art of reading has been created, for whose pages all the inks of the world have waited before any fear of drying. It is the kind of novel that one should also avoid, for it is not for the fainthearted nor for those who think that fiction and politics are different issues. As the inside jacket says, "senselessness catches you by the throat" and I would say, it shakes you like a rag doll and after reading it, you are further away from any further desire for any further reading of anything like this or anything else.

The novel opens with a brilliant declaration, "I am not complete in the mind", but these are not the words of the narrator.The narrator, a writer in exile naturally and now living in a neighbouring country in Central America, has been employed by his friend Erick through the Catholic Church to copy edit one thousand one hundred pages of testimonies, declarations and evidences of native Indians who were massacred years ago at the hands of competing government and other right or left wing forces. The narrator must preserve the essential and delete what is un-necessary but as the narrative progresses, we find that the narrator is distressed at what he has read or reads and that what he finds is not just frightening but part of a feeling that grows inside him which then filters on to the pages of his narration. The narrator finds melancholy in the sentences that he quotes for us and finds them moving and poetic. To remember these strange broken voices, he notes them down in his private notebook from time to time.

However, while his reading progresses, his paranoia grows as he starts suspecting everyone, including his very friend Erick and the apparatuses of the military and the Catholic establishment. He suspects shadows on the street and in the end reads the narration in a spiritual retreat. As his narrative progresses, we find his dead pan humour directed everywhere and his almost single minded aim, even when he thinks of girls for sex with his imagination running wild. He is however very conscious of being conscious and in a funny passage reminds us about the revolting smell of the girl he friends to seduce. He then imagines being a target of sexually transmitted diseases through the establishment and the church. "Imagination", as he memorably says, "is a bitch in heat".

The end is extremely memorable in itself though I won't mention it here. As a novel, it grows on the reader right from the first page. The atrocities that he enumerates are described with pitiless detail and in the Bernhardian fashion are repeated again and again till the reader cringes.( while the Bernhardian repitition is humorous, this one is viscerally penetrating) The essence of this novel is not only that you see the horror but that many times, one turns away from the pages, wondering at the un-manliness of so many men, making you feel indescribably guilty for uncommitted sins. The lines that he snatches from the testimonies, the ones he gives us are lines he reminds us are of broken syntax but unparalleled music of the most remote melancholy but the nearest pain. Page after page of assault and page after page of relentless graphic unease surrounds the reader. You read it in one painful surge, in a convulsion of unease and as I read somewhere, it seems as if the novel has been written in one breath.

Some of the testimonies like "their clothes stayed sad", or "our houses they burned, our animals they ate, our children they killed, the women, the men", or "because for me the sorrow is to not bury him myself........."The narrator runs away from his shadowy fears or real ones and inside him rises the chant of........ "the dead......wounded, yes, is hard to be left, but dead is ever peaceful"......As he reads how babies were blown to bits, as the brains are sprayed all over the pages, as the dead and the living merge, the narrator is indistinguishable from the assailants who committed the crimes, he is on the run and is running after someone as well. In the end all merge together, victim and torturer, murdered and the killers, writers and judges of testimonies, and when the narrator flees, he gets a note. "Everbody's fucked. BE grateful you left".

Although the whole novel can be quoted in its entirety ( an extract in the previous post), this passage is quite striking.....

"this guy with a shaved head who very cunningly segued from this remarks about Vallejo’s poetry and its relationship to indigenous languages to a subtle interrogation about my work at the archdiocese and my friendship with Erick, all packaged neatly into his conversation with me at the kitchen table, not paying any attention to calls to join the group in the living room, where things were picking up, as if the guy had known ahead of time about the psychological problems that afflicated me and that consisted of wanting to tell everything once I’d been encouraged to start talking, down to the hairs and the smells, spill it all out to a point of satiety, compulsively, in a kind of verbal spasm, as if it were an orgiastic race that would culminate in my total abandon, until I was left without secrets, until my interlocutor knew all he wanted to know, in an exhaustive confession after which I would suffer the worst possible backlash".

This novel, with Bolano saying its "will to style" is an achievement of the kind that for a writer is a rarity in itself. It asks the questions that Bolano asks in Nazi literature in the Americas and in a stylistically fantastic manner that makes you ask questions of yourselves. Is it enough to be morally wounded after reading this text and where does the line need to be drawn? For me the most important question after reading this novel is this..........Is it enough just to read this horror and then carry on and what then is the ultimate purpose of reading?
Posted by Kubla Khan at 10:17 pm