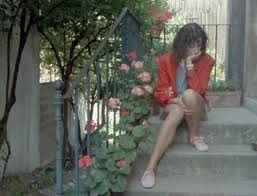 Rohmer's Le Rayon Vert situates Delphine's desire for 'understanding' in relation with her own standing in a bourgeois world where 'vacations' set the tone for knowing a person and her situation. Since loneliness can be fought by holidays in exotic locales or even at cheaper places, Delphine must not however let the world hem her in. Instead each abortive attempt at a holiday must bring her back to the starting point of such desire. What starts as a desire to negate her isolation ends up in increasing her isolation and making it more worse. Any attempts at conversation with strangers is an attempt to try; however, the outside world seeks answers that are already decided but Delphine has her own views which are outside the legitimate. The deciding tone of her outer life is set by the interactions she has with people who see the world in a narrative sequence considered normal. Delphine strives to explain to others how she sees the world and has to explain it making those explanations credible. All explanations must be bourgeois to bourgeoisie people.

Delphine struggles to articulate herself because some things have no point in being explained about. In essence, she is in isolation and lonely, but extremely sensitive to herself. This sensitivity is generally confused with stubbornness, consider the vegetarianism dialogue in the movie where she has to defend her right to be a vegetarian even if there is a hint of being teased. In this sense, not having a lover is a disability that she chooses to live with but her search is for someone credible, someone who is not simply interested in just sleeping with her. This search, like Haydee's search in The Collector, is something which the casual observer, who is hurried, has either no desire nor inclination to follow more deeply. Delphine knows the loneliness of finding herself in after what casual sleeping with people can lead to, she wants to be granted recognition as a person who is capable of being loved as well as capable of loving.

The Green Ray is a scathing indictment of a bourgeois world that usually considers difference as 'not fitting in'. As usual in Rohmer world, the action details the happenings over a month's vacation period. The chats and conversations are carried out in 'real time'. One particular chat with two strangers and the Swedish 'free' spirit is absolutely brilliant in depicting a particular kind of holiday small talk. In those few minutes, Rohmer shows the flaws of an entire generation. Maybe the green ray that Delphine sees towards the end will bring her good luck and love, for she has her quirky superstitions.

The movie is charming, the sets are around the world of cheap holidays and show cheap bargain hotel rooms, and the transition of the holidayer from a city to a beach with credibility and without artifice. The beach scenes are extremely realistic, my favourite is the exchange between the two young strangers, both men, Delphine and a Swedish girl "who knows" English. The ennui of holidays and the state of mind that prompts such desires is shown in savage nakedness.
Love is a word much misunderstood, Delphine in her youthful enthusiasm confuses it with many other things. However, sensitive that she is, she does not confuse love with 'filling the gap', she is smarter than that. Her occasional lack of humour is not her being tedious but sensitive in trying to fathom certain things. Delphine is strong-willed like other Rohmer women, she will walk alone all day if it comes to that.
Posted by Kubla Khan at 7:03 pm