Chloe in the Afternoon 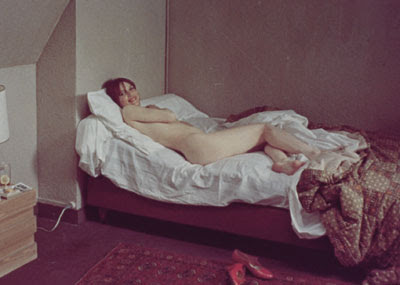 Chloe, of Rohmer's Love in the Afternoon, is the most frank and openly speaking woman of the six moral tales. Sitting in an office will kill me she says to her lover Frederic, it is so bourgeois. Chloe wants to have what she wants to have, on her terms, in her way. Any other way would mean demeaning the whole thing. It is possible that Rohmer paints a bohemian picture of Chloe, a kind of free-spirited image of Chloe but even if that is true, she still attracts not because she shocks but because she speaks the truth to Frederic. If truth is shocking then so be it. Love or Chloe in the Afternoon is the last of the six moral tales that I have watched recently and I must admit that as a cinematic experience, it has not only been rewarding but a sexy tease too.

Frederic is visited by Chloe suddenly one afternoon in his office. Frederic is married and his wife is expecting their second child. Chloe is not an old flame but the ex-girl friend of an old friend. Chloe has returned from overseas. Chloe is looking for a job. You are not my friend says Chloe to Frederic but I like you. They start meeting each other regularly in the afternoons when Frederic, a lawyer, is free. Frederic is the quintessential narrator of Rohmer's, he likes reading novels when he goes to and from Paris to suburbia. Frederic is in a stable marriage but nonetheless he is looking for something. He imagines and daydreams once that he is wearing a magic amulet that can weaken the will power of beautiful women he sees walking around on busy Paris streets every day. They are all extensions of my wife, he thinks.

Chloe and Frederic start meeting every day nearly, going shopping or having coffee. Frederic likes talking to Chloe and Chloe is quite amused by this all. Once she disappears unannounced for a week which annoys Frederic. Later Frederic helps find her a job. Frederic insists he only loves his wife but prefers to be in Chlo's company. Frederic thinks to indulge in polygamy is barbaric but adds that he will obey the rules of society. Chloe thinks that polygamy is all right if women are also allowed the same freedom. Chloe flirts with him and he flirts with her. They kiss sometimes but he always insists that he belongs to his wife. However, later, in her tiny flat, she steps out of the shower and she asks him to dry her. He does and starts undressing himself, while she waits naked for him on her single bed but he suddenly remembers his family while taking his clothes off, an old image comes into his mind and he departs very quickly. He goes home to his wife.

Chloe wants a child with Frederic but Frederic thinks that is crazy to which she responds hence:

"It is enough to know I love you and tell you so. You know, I have a vivid imagination. I can imagine it is you when I am making love to some one else." 'You are crazy' "Crazy is pretending you love some one you live with."

Frederic dreams of falling in love with other women. At one point he asks Chloe: Can one be in love with two women at once? ( I remembered it is the same question that a dear friend asked me a long time ago) Chloe tests him initially but it is hard to say whether she loves him. She is clearly very free spirited and has bold ideas but is she really that free? Chloe sees beyond the well trodden path, she wants a meaning entirely within herself, to herself. She will not perhaps find any stability within the bounds of marriage but then as a character she is a template of a certain free spirit, perhaps of the times. She wants to become a mother, outside the marital axis. Chloe is unconventional in comparison to the conventionality of other thoughts, in comparison to how others think.

Frederic is carried away by passion but it is also fair to say that he likes being in the company of Chloe, for after all, she is good company. The question is: Can a man and woman be friends outside a sexual binding? The scene that shakes him is the scene that reminds him of his family life. That convulsion is the same as other convulsions that Rohmer males make. That they shake themselves from the point or the brim of passion and return to more 'moral' choices is a Rohmerian imperative. In that sense, Rohmer is a conservative moralist but if one is a moralist, surely one is not always conservative? The idea of ethics and faithfulness must enter into consideration in any relationship, however trivial. That such choices are made by his males does in no way make them radical departures from the other male types that were portrayed by Rohmer's contemporaries.

Perhaps the magnitude of thinking of an artist, if worth judging at all, must be done after a few decades of his work. In that sense, Rohmer's world assumes more importance now in the present European climate. However, these works must not be seen as just outside the political framework but as part of a wholesome commentary on moral and ethical considerations. In a way, the choices that are made individually have a combined effect as well. However, it is also important to realize and understand how a particular thought is approached. And which steps in a thinking process are neglected. From that point of view, these tales are very important.
Posted by Kubla Khan at 10:09 pm