One of the dangers after watching a few of Shohei Imamura's movies is that one can lose the taste for all other kinds of cinema altogether, and let oneself be seduced by a cinema that has reached fruition and is complete. While Imamura described his cinema as messy, it would be fair to describe it as dangerous. By messy, Imamura might have meant subversive and sarcastic or he might have meant that his movies would not follow genre conventions or the rules of Japanese aesthetics or that he would make movies about messy characters. I would say that his cinema is complete and within one movie, he shows us all the emotions that a person is capable of, including disgust, greed, lust, affection and tenderness. I will aim here to briefly discuss some aspects of his movie called Vengeance is Mine while also observing some general features. al murderer and is played by the marvellous Ken Ogata. Ogata plays a disturbed and disturbing factory worker called Iwao who kills two of his colleagues in cold blood and in a gruesome, pitiless manner. There is seemingly no obvious motive for his crimes. But in classic Imamura fashion, we see his previous criminal history as a confidence trickster, a con man and a swindler and earlier still as a disaffected and rebellious young man, witness to his father's humiliation by the armed forces. Iwao is from a catholic background and the reference points to Catholicism loom large throughout the movie. Later, he lodges at an inn of low repute and befriends the lady owner of the inn. He begins a stormy but almost predictable affair with her.

The story is told in numerous flashbacks and shows how his wife and father were also erotically drawn to each other. In many ways, the general baggage of Catholicism sweeps over the movie almost completely. However, it in no way explains the senseless murders that Iwao commits. There seems to be an unpredictable edge to his behaviour, for he is extremely explosive though he is capable of occasional kindness.

I will be loath to accept any psychological explanation for Iwao's behaviour other than a deeply unsettling fascination with murder. It is more acceptable to consider the almost repulsive murders and absolutely unremorseless behaviour as just that, basically senseless. In an inversion of the title, 'vengeance is mine' would mean vengeance after life provided there is one such. However, it would be futile to consider that Imamura is telling us a tale about a serial killer. As Imamura said himself, he wants to make films that show a connection between the lower part of the body and the lower strata of society. From such a perspective, the most striking aspect is a rough rawness to his movies, depicting a world of the lower classes that is crassly and almost resolutely sexual. The numerous sex scenes that pervade his movies seem to have absolutely to do nothing with sex, for in almost all cases, there is violence associated with these acts and women are beaten into having sex. Or generally speaking, I should say that sex cannot exist other than a kind of violence that people do to each other, and this has nothing to do with class or this movie.

In the world that Iwao moves in and the people he befriends, violence is inbred within their lives as is any lack of sensitivity or decorum. It is as if decorum is the forte entirely of the middle classes. Iwao sleeps with Haru whose husband sleeps with prostitutes; Iwao's wife has incestuous moments with her father-in-law and thus the cycle seems endemic. In Imamura world, the hypocrisies and sufferings of certain weak people is a given fact, any resistance is considered as heretical. However, in what is clearly a swipe at bourgeoisie morality, the violence that is rampant is shown pitilessly. It will be total ignorance to see this without the ramifications of what the aftermath of the second war has meant for Japanese life. Imamura's cinema thus depicts a reality that is so estranged from what Ozu shows us about Japan. Ozu's 'family movies' are not unreal to say the least; it is h 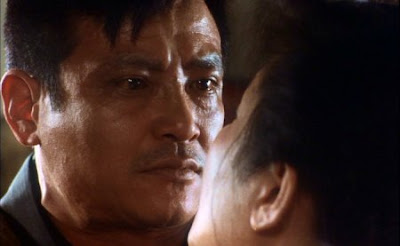 is studied restraint that is so different from Imamura's.

"The Japanese did not change as a result of the Pacific War—they haven’t changed in thousands of years!", said Imamura in an interview. The Japanese life that we see so often in the classic cinema of Ozu or sometimes in Mizoguchi depicts a consciousness that actually is different from the one portrayed here for here it is so unaesthetic to say the last. Imamura strikes me as anti-intellectual in his approach to films and the way his characters don't look for rationalizations to define their world. Just getting on with life is entirely what the game is all about instead of ruminating on half empty streets against beautiful backdrops with melancholic beauties pondering their way carefully through snow or rain. Consider Sadako, the portly, plump woman who makes her way home after seeing her tormentor die in a train tunnel in Intentions of Murder, the movie that is seldom calm.

In my facile way, I consider that all art must not only show political realities, at home or on the street, it should not flinch in going all the way in showing the skin under the clothes, here be it a beautiful kimono. By baring monster desires for her father-in-law, monster so long as society considers it so, Kazuko, in a scene of unbearable erotic fever, brings out all the pent up emotions of the human psyche in that hot spring where vapour and night have clothed both naked bodies. In that sense, Iwao is a true revolutionary, for his killing and his questions are truly anarchic and hence senseless. How can one justify a logical killing from an illogical killing, for after all, a murder is just that? In using the lower classes to show his vast understanding of human nature, Imamura has brought out all the anxieties of the thinking classes of not only his but the entire generations of people who have fought against outside oppression in the entire world.

A 'kept' woman like Haru or a 'common' law wife like Sadako are just waiting for another oppressor to seduce and kill them; Iwao is the simmering symptom of unknown illnesses. The beautiful flower arrangements or the mono no aware must not seduce the viewer into lulling herself or himself into thinking that there is no discontent here; the world of prostitutes and pimps and murderers is existing alongside the world of those who structure that world. That Haru asks for no explanations from Iwao and that none are forthcoming from him adds to the intrigue and the drama. Haru professes a desire to have his child and eventually he kills her like he has done before, with no apparent motive at all. Ultimately, everything is senseless, including his crimes.
Posted by Kubla Khan at 2:13 pm

i have just got it myself, inspired by your post, tomorrow i will watch it too! until then, i will not read your words, i want to savour them afterwords, like precious veils to unveil and make one's eyes see differently (only apparently a paradox!)