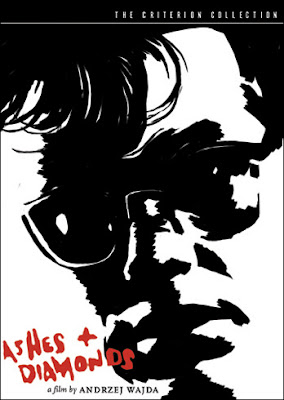 I fell in love with Andrzej Wajda's Ashes and Diamonds while watching it and am still under its spell. I had not seen any Wajda movie before. It is the kind of movie that fills the viewer with awe at a film maker's craft, a kind of movie that stays with the viewer. Even though the movie portrays what has been shown in numerous ways in numerous movies, namely the dilemma of idealism against the realities of life, the harsh choices that a harsh life inevitably presents people with, yet it does so in a manner so artistic and so restrained that it leaves one sad and breathless, enlightened and yet wary, filled with the after echoes of false dawns. It leaves one with ashes and no diamonds.

The movie begins with breathtaking speed and surprise. Maciek and Andrezj are lying on the grass on a seemingly benign day in an um-named Polish town and we find that they are lying in wait, waiting to assassinate a communist party official immediately after the second war has ended. The scene ends with frantic violence, with Maciek gunning down one fleeing man in front of a chapel, the man's back covered with flames. Later on, in the main hotel in town, they discover that they have gunned down the wrong people by mistake and that the surviving official is at the same hotel for the night. Maciek, younger than Andrzej and idealistic, is naturally miserable at what has happened. However, the two men who are right wing soldiers are ordered to aim at their target again. The action that follows details a 24 hour period at the hotel, during which Maciek falls in love with a beautiful barmaid, Krystyna at the hotel bar. Maciek seems torn between what he truly wants and what he desires or what he thinks he idealizes.

There is a scene between Maciek and Andrzej near the bar where Maciek is trying to capture the bar girl's attention. In a scene that I personally find ravishing and unforgettable, a scene that I must have watched endlessly, he sets a few vodka glasses on fire. The symbolism of lost youth and waning idealism may be there but for me, it is such a beautiful scene, so romantically enacted that it takes the breath away. Krystyna senses that Maciek cannot commit to her and later on during the night, they visit an old chapel outside the hotel. The innocent men that Maciek has killed earlier lie there but outside is a statue of Christ hanging upside down. Afterwards, Maciek departs from Krystyna and goes in search of Szczuka, the communist party official. He guns him down near the hotel and Ssczuka falls in his arms. Maciek however decides not to join Andrzej on their way back to Warsaw but runs into a patrol of Polish army soldiers who run after him and gun him down on a rubbish dump.

Maciek is played by Zbiegniew Cybulski and I have learnt that he died tragically in a train accident. His performance is one of the great highlights of this movie. In essence, his performance is unforgettable. Cybulski was compared to James Dean once and in his leather jacket and tinted glasses, he looks menacingly debonair. He is restless and charming, torn between the ideology that makes him a killer and the trappings of a young man who desires love and life. He is afraid to admit to Andrzej that he may have fallen in love with Krystyna. In essence, in those few hours in the bar and in his room and outside, his agitated romanticism and his sullen attitude balance his freshness and his innocent manner. He is the prince amongst killers, he is a romantic anarchist, he is lover and assassin, revolutionary and doomed.

Wajda's cinematic techniques, as I am beginning to familiarize myself with, are considered baroque and beautiful. The scenes are shot in a naturalistic manner, and there is much emphasis on light and shade. The bar scenes are magnificent and the burning vodka one I have mentioned earlier. Krystyna is restrainedly beautiful, Maciek is quietly confident that she will accept his invitation to join him in his room. She knows she has no future with him but in her own way is hopeful and spends a night with him. He dies in a rubbish dump, the symbolism here is evident, Wajda shows the inherent stakes that pit one force against another in the name of country and ideology and patriotism, which to Maciek or any other sane observer in any age must strike as hollow and futile in comparison with the idealism of youth, which he burns and the gift of life which he has snatched from others. Outside the chapel with Krystyna, krystyna unearths for Maciek the feelings that he is not supposed to have or the love that he must not voice. Later on and since then, everything is ashes.

Below, the burning vodka scene that I found in Polish. I have fallen in love with it.

I hadn't noticed disquietthoughts.blogspot.com before in my searches!
What a nice blog post! I am so glad you thought to talk about it.

Wow, surprisingly I never knew this.
I have been reading your blog a lot over the past few days and it has earned a place in my bookmarks.Thanks for sharing with us.
Ashes and diamonds

Wajda’s fans come together! We invite everyone related to the film industry and more to participate in the great artistic event of Wajda Art! Become a co-publisher of the incredible albums of Andrzej Wajda’s drawings. You’re wondering how the master of Polish film created his great works? Visit our website or Facebook profile and see how you can support us. The crowdfunding websites will start soon!

Hi, did you know that the Wajda Art project was just launched? As the hosts of this incredible artistic event we’d like to invite you to participate to our crowdfunding campaign on Indiegogo: http://www.igg.me/at/WajdaArt – support us and get incredible benefits!