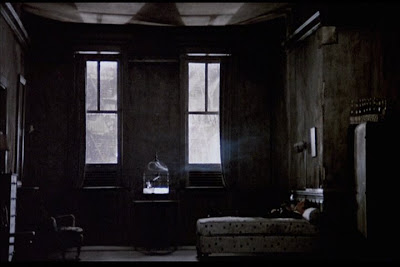 Sometimes style alone matters and from that perspective, Jean-Pierre Melville's Le Samourai is the king of style. Melville creates a gangster who while outwardly only wearing one hat carries many philosophies inside or may be nothing. A tribute to and inspiration from gangster noir, and a source of inspiration to movies since then, Le Samourai is stylish and slick, and is able to create persona and mystery though that may not be what the samurai himself wants. In keeping with mystery and style, Melville's minimalism is bleak, grey-white and sparse, from the first frame where blue smoke and a bull-finch in a cage making it's relentless melancholy noise to later and in places elsewhere, Le Samourai walks in the style and manner of an artist trained to be devoted to his unique art alone. In that sense, Delon's Jef Costello with his American name is one whose philosophy flourishes in the moments where his eye and white gloved hand aim to kill, for killing is high art.

In essence, sometimes what draws audiences to flicks like The Godfather is not murder but a certain style that gangsters have, and in all truth, Melville's assassin has credibility because he seldom talks and we don't know him much when the movie ends. Add to American inspired gangster flick the seeming outer kernel of a Japanese samurai and as the credits roll, Melville announces the code and way of the Bushido, which is the director's fiction. All such narratives about gangsters must ultimately be fictional and emotive and also romantic but here, Melville creates a unique melancholy assassin, whose spartan room but stylish clothes reveal a melancholic silence. He is trained to kill in many ways and in one scene, a woman notices him as he sits in a stolen car, noticing the stealthy glance, but returning it with looks that kill. The credibility of this movie lies entirely in de-romanticising the killer and in keeping melodrama away from him, and his credibility is kept in place because of our distance from him or rather his studied distance from us. His extreme aesthetic silence and his fantastic good looks are props that help in this almost bleak existential melancholy, for the contract killer too has a philosophy, which he will carry out, regardless of anything.

Le Samourai is a wonderfully stylish movie and Alain Delon plays an assassin whose silence and single-mindedness betray nothing except that bleak melancholy of his very bleak room. There is little of the true samurai about him in the way of a true philosophy and in that sense the title can be misleading. However, in dealing with his last contract he shows that he is indeed a samurai, for he does a seppuke. The soundtrack is magnificent and mouth wateringly sexy. Melville had adopted his favourite American writer's name. Delon gives the role that aura which few could have done.
Posted by Kubla Khan at 12:01 am

i agree with everything here, i have such a soft spot for this film... and i think your first sentence is brilliant.
in fact, now you put me in the mood of seeing this film again...

"Melville's assassin has credibility because he seldom talks and we don't know him much when the movie ends."

Agreed. It occurred to me while (finally!) watching this movie that the plot isn't really all that complicated, but it's more opaque than it would otherwise be because we the audience are kept at such a distance from Costello. He is as much a mystery as any of the conflicting plans are.

It is Costello that is the mystery, otherwise the plot follows genre conventions.

In this melancholy, in this detachment, the futile-existential killer finds a philosophic place to keep himself. witness that in the end, he carries a blank pistol.