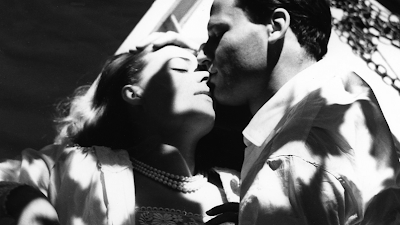 I find tales of bourgeoisie women in their mid lives facing boredom in their marriages boring to say the least. They happen usually to be trapped in their 'loveless' marriages and chance encounters with strangers or husband's friends lead to occasional emotional and often sexual release. Then they suddenly realize that it either sinful to do so or against prevailing norms and values and this behaviour is sometimes generously described as a revolt against masculine repression or some other fanciful psychological devices are used to explain such misdemeanour. It is fair enough at times to accept that maybe their lives are boring or loveless but often most lives are. But where Louis Malle's The Lovers struck me as more interesting though less realistic is the actual revolt of this attractive woman in a loveless marriage who defies 'logical' behaviour and proceeds to leave her child, husband, clothes, jewellery and all that such life amounts to behind and actually flee with her 'lover' in his car from her house to something which she does not know what.

On the road with her love, chance having brought them together, she has misgivings and sheds a few tears but she defies all her initial doubts and leaves. She has spent, initially unplanned but later with resolute intensity, a night with her new lover and seems to have discovered 'love' and meaning. Now, I am all for love at first sight, even second sight, but to actually flee after the first night seemed very brave to me. But perhaps that is what she was craving for, this sense of danger that first sight attraction brings, this sense of adventure that 'instinctual' love brings, ennui and 'repression' having thwarted all emotions perhaps. On the surface she doesn't seem repressed, she enjoys material comforts, is fashionably dressed, enjoys the style of polo playing upper middle-class, sports the latest hair style in Paris and has friends who enjoy the same rush. I thought her husband seemed stern but sensible, he understood the bourgeois demands that his wife was putting on herself and yet something eludes us, something perhaps that Malle hides.

Unless the story is a parable, the crises that we see must not however make me cynical to say that the wife has no right to feel bored; even bourgeoisie wives have intellectual and emotional needs! But what I liked most about the movie is the end, for the wife and her new lover actually do flee for something which I do not know. Will this adventure end and will she miss the trappings of her usual comfort? What about the young daughter she has left behind?
Jeanne Moreau plays the wife and is ravishingly attractive and almost ethereal in her beauty. Her grace, her charms and her erotic attractions have something of the watery about in this movie and in spite of her adultery, she appears a picture of 'innocence'. The camera work is subtle, with alternate focus on shade and light and the house scenes are very effective in showing the interior locales of such an existence.

This movie is clearly an aesthetic success and an important sample of the French new wave.
Posted by Kubla Khan at 1:49 pm

In most cinema that I have come across, a bored wife finding a lover is treated much more seriously than a husband's indulgence in an office affair or such-like. The husband's affair rarely finds itself at the center of the story and the reason could be (without bringing too many sexual biases in play), that the world has become more accommodating to a man fiddling outside the marriage, but it is relatively less accepted from a woman. Hence, the affair becomes more adventurous as it breaks more stringent norms.
I personally love such films/books - Anna K being such a beautiful example. There is something brave (and restless) about her wanting something different from what she chose at a young age. Most lives are boring, and that is why the possibility to flee that boredom, even for a short while seems so appealing.

The depiction of male indiscretions as not the same deal as that of a woman? I am not sure. Perhaps, we must see the context in which such depictions are made. Ordinarily, both would deserve the same attention. In this movie, it is in showing the nature of how a middle or upper middle class existence frames that sense of adventure, it is that which is important. Not the adventure per se.

As regards Anna K, well, that is a different matter altogether for the motives which T had in writing that book are different to the motives that we witness in movies that we might have seen. Altogether, I would be interested in a more psychological approach to this issue, and perhaps Belle de jour reminds me of this.