The Consequences Of Love 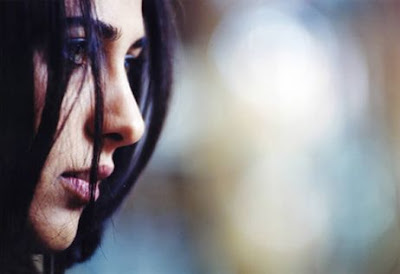 Called Le Conseguenze Dell' Amore in Italian, and directed by Paolo Sorrentino, this movie is one of the most unmoving movies about love or anything, with the only memorable feature being the evasively beautiful Olivia Magnani, whose role is reduced to absolutely nothing of any consequence, as she flickers on the screen before disappearing altogether.

A middle aged chain smoking bald gentleman has been living in a hotel for eight years, doing the same thing always with punctuality, including injecting himself with heroin, and this life is a punishment for having unwisely invested money for the mafia. Having thus incurred their wrath, he suffers in isolation, away from his family whom he occasionally calls. A subplot is revealed as two men slip into his room to carry out an assassination, steal his bag of money that he deposits at a bank regularly at the behest of the mafia, and he finally kills them, and decides to keep the money, till he is found out and punished and killed by the mafia. In between all this, he develops feelings for the bar girl Sofia, played by Olivia Magnani, and even buys a car for her, who refuses to accept it till she finds out who he is.

I don't want to sound flippant about the plot but that sums it up. There seems to be a hush about why the man is living in a hotel yet no one wants to know why, there is his immaculate attire, his browsing in posh malls, his smoking, his recalcitrant attitude and finally his love for Sofia. And yet not once did I feel either taken in by the character or enamoured of their romance which was non existent. This man who has a secret, that of his association with the mafia is living in a sort of prison, and yet his plight is unmoving and his romance totally lacklustre for it is not there.

I was surprised at the title of this movie too. This man, keeping a secret inside for years, yearns for an extraordinary death and when he gets a chance in the end to save himself, he prefers drowning in wet concrete, remembering a childhood friend. Not for an instant was there an inkling of love, maybe desire but watery in the end. I kept wondering whether it should have been called something else. A man in hiding, middle aged, estranged, starting a liaison with a bar girl, an existential theme, mafia running around, a beautiful woman, a sad man......what else could one ask for?

The movie has been praised for its first tracking shot, and its deft camera work and its use of long, sliding and oblique shots and camera angles. While that is actually well done, this movie bored me, for plot was not dense, the story seemed hollow and perhaps a more painful love or a dangerous liaison between the barmaid and our man might have saved the situation. A more romantic and less cheesy affair would have been admirable. There is no art here for understatement, gifting a sports saloon to a barmaid you don't say even hello to is never one.

The performance by Servillo as the doomed man is stiltingly bored, predictable and oddly comical. Olivia Magnani's acting talents have not been exploited though she is charm, grace, beauty and a song in motion. The soundtrack however suits the movie, which is basically chemical underground. I am surprised why it was nominated for the Palme D'or at Cannes. Apart from the above, I failed to notice anything else, and this is one movie that I won't see again. But yes, I will remember it for Magnani.
Posted by Kubla Khan at 8:01 pm