Knife In The Water 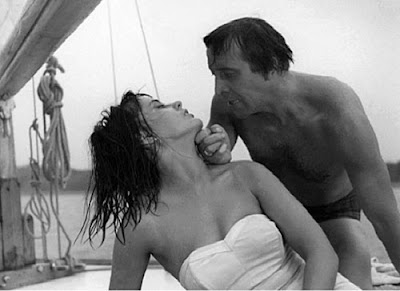 Knife In The Water, the debut movie by Roman Polanski is an eminently watchable movie and highly representative of its genre, a kind of movie that is akin to a road one, though here the action is entirely on water and sometimes inside it. There are only 3 characters, though I would add the water and background score to the cast as well.

The story reminded me of something that I cannot put a finger on, it seemed vaguely familiar. It definitely has shades of Polanski's Bitter Moon, with that movie set against a background of the sea. However, its background score is much superior. A couple is on a day out and they give lift to a young man, who later joins them at the older man's invitation. Knife in the water is a duel, a bout, a game of wits, a game between a younger man, a hitchhiker and this older man, who is sophisticated, worldly and an adept sailor, who is quite keen to show his prowess to the younger man, who is clueless about the finer aspects of sailing.

Then begins this game between the two, with the older man constantly challenging the other younger man, who is constantly showed his place, his inferiority. There is a veiled sexual element added through the wife, who initially appears ungainly but as the action progresses, she unveils in a way, becoming sexier and more attractive. There is violence in the end, which brings us to its end, its denouement, whence the older man and his wife return, after the younger man and the woman have had their incipient attraction turn into sex. The movie ends with a particular change in the status quo, with the woman emerging stronger.

There is a peculiar atmosphere in the movie, where the difference between the two men almost rising to a difference in class, knowledge and bearing, in sophistication and culture. And yet, the basic difference between the two is not much, with both showing off their prowess before the woman, thus enacting an atmosphere which spirals out of control. It is always a possibility that equations change between people in enclosed settings, especially when there are precursors to such situations. An outsider, which the young man essentially is, could have brought out the best between the couple but on the other hand, it creates a wedge, a simmering tension between the two, the roots of which must lie in their relationship before, before they set out on this journey. The young man's stealthy sex with the woman thus thrives on an atmospheric difference, generated suddenly by the husband's absence.

In Bitter Moon, Polanski uses similar motifs, this time a crippled husband using his sexy wife( played by his wife in reality) as a bait for a frustrated, equally confused other person. However, in that movie, I thought the end was slightly inconclusive while in Knife in the water, the end settles an issue, a psychological victory is achieved by the wife, who though donning her earlier appearance, has achieved a subtle and concrete victory.

The cinematography is exceedingly well done and crafty, the waters appearing black and mournful, harsh and very scheming. The musical score is jazzy, almost cheap, perhaps adding to the slightly tacky quality of this journey, even though the man and woman appear to be sophisticated. Overall this is a fine movie and quite thrilling.
Posted by Kubla Khan at 7:24 pm

mmmmmmh...I think you touch here a crucial point. How do women perceive themselves, their power's relationships within the world, their couple’s universe and the growing old...and why sex with a younger man looks like a victory?

There is an elaborated carpet of intertwining meanings, I think, over which the director lays this movie. Like the sea on the background, he makes us think that it is almost obvious, a background, in fact. Placed there just to highlight the people playing; like the cheap music, I agree. Nevertheless, this background is also the framework, and the skeleton of the movie.
If you take it away, if you challenge even one of the (supposedly) shared understandings about couples, ageing, power...the whole structure collapses.
I used to be extremely fascinated by this movie and still am. But, like you, I am left wondering, feeling, strongly perceiving that the director drives deeply the whole game, and its success is to make it looking so natural, a snapshot of the hidden power struggles into human relationships, a snapshot of hidden but undeniable truth.
But there are many truths, isn't it? And like in dancing Latin dances, a strong lead is expected and necessary, but sometimes one turns at free movement and breath deeply.

"Nevertheless, this background is also the framework, and the skeleton of the movie.
If you take it away, if you challenge even one of the (supposedly) shared understandings about couples, ageing, power...the whole structure collapses"
Exactly, as you say rightly......all these changes or power struggles, these undercurrents of psychological dramas take place when the usual relationship suddenly has another factor attached to it. the other person, or the third entity adds a dimension. also, it is debatable whether such a thing can happen in a different or say urban setting, while sitting in a cafe.
the claustrophobic nature of the movie adds to the tension, thats why i thought it is akin to a road movie.