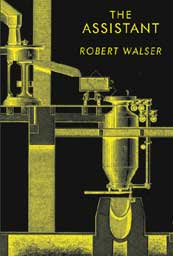 The Assistant is a movement, a further development from Jakob Von Gunten, for in this novel, the hero or main character has decided to seek employment, paid one at that, which was not what Jakob had decided to do in the other story. The Assistant is a longer, studied and beautiful novel, written with a language which can simply be called Walserian, a language at once subtle, simple, rich and nuanced, and not at all affected but in consonance with the protagonist, and never shrill.

This was Walser's most ambitious novel, and published in 1908. It has only recently been translated into English in 2007, and won a PEN translation fund award for Susan Bernofsky, who has also written a helpful after word. Some critics consider this to Walser's best book, or his bravest. Coetzee called it heart-rending, unforgettable. It seems to have an autobiographical angle to it and is based in Switzerland. All in all, it is quite a wonderful novel, written in a voice that seems measured, sure, never in a hurry and always humble.

Joseph Marti, starts his employment as an engineer's assistant, who lives with his family in a beautiful hill top villa in a village. Joseph's thoughts are mixed, fearing dismissal and wanting acceptance. Yet as the days go by, his employer Herr Tobler reveals different facets of his personality, and Joseph gets to know his employer's wife Frau Tobler and their four children. Frau Tobler is romantic, proud, unpredictable and moody, with her moods changing as quickly as the reflections over lake Zurich. It becomes evident to us soon that the business is in decline, there is a danger of his employer gong bankrupt and Joseph has not a chance of getting his salary. These facts are revealed slowly, interspersed with Joseph's reflections, his thoughts, his ideas and his understanding of his own place in this scheme of things.

Now Frau Tobler calls Joseph a " peculiar" man. This sets his thoughts in motion and here he resembles Jakob Von Gunten, for even though he resents being called so, he accepts it all the same. Joseph loves manual work, and "there was something about him that favoured the physical. Moving his arms and legs struck him as highly enjoyable. He preferred swimming in cold water to pondering lofty thoughts. Should he be hitched to a cart? He was possessed of intellect when he wished to be, but he liked to take breaks from thinking".

However, Joseph is not extremely meek or totally subservient, for he can speak his mind whenever needed and also is not averse to advising other people soundly. He avoids thinking but cannot stop to think. He writes his thoughts down, even though he throws the papers away. Joseph is clever but not cunning. He is also very conscious of not wasting time, for he is being paid for working. However, he cannot stop day dreaming and his reveries are seldom uninteresting. He is clearly more worldly than first impressions suggest, he visits town for worldly pleasures and even thinks of kissing Frau Tobler. Now this is not possible with Jakob Von Gunten at the Benjamenta institute, for he would consider this as wrong.

Walser's novel is extremely well written, in a tone that reminds me of things past, with such a delicate turn, a quiet tug at one's memory that as we read on, we feel a pain, a pain of having lost one's childhood and everything else with that. The landscape that surrounds the Tobler household is an essential part of this book, and Joseph's thoughts and feelings find a mirror in the surroundings, which are explained in a language which is serenely simple. The narrator's voice merges with Joseph's and this is admirably done, for the narrator seems to be privy to his thoughts. Consider this passage........

One day it snowed. First snow of the year, how thick with memories you are to look upon! Past experiences fling themselves to the earth along with you. The faces of one's father and mother and siblings emerge distinctly and meaningfully from your wet, white veils. One cannot help but be in grave and merry spirits when you arrive with your countless flakes. One might take you for a child, for a brother or a sweet, timid sister. One holds out one's hand to catch you, not all of you, just little bits of you. Dear first snow, come snowing down.

Joseph's meditations are not those of a philosopher but of someone who could be one, of a person who is in no doubt about himself, someone well behaved and observant and yet not really a fool. Joseph, while whiling away his time at his employer residence, constantly asks himself if he should or could waste his time. He berates himself constantly, and we are told that Joseph was in any case "a slow learner, at least that is what he imagined, and what we imagine is never entirely lacking in underlying justifications". Joseph is acutely aware of his thoughts and his perceptions are subtle, for instance........

Wealth and bourgeois prosperity like to dispense humiliations, or, no, that is going too far, but they do have a fondness for gazing down on the humiliated, a sentiment in which we must acknowledge a certain benevolence, and of a certain brutality as well.

So who is Joseph Marti? As the novel progresses, I was enjoying each and every observation, reverie and day dream of this young assistant. While his emotional side seemed open, it was actually shut, his politics seemed restrained but understandable and his inner complexity, a mix of memory and desire , seems totally credible. There is an apparent lack of movement in the story line but the movement is in Josephs mind, and there events happen very fast. He is quick and slow, his impressions are based on perceptions, ordinary, day to day and his desires and dreams seem honest. His reflections, as I said earlier are matched by the descriptions of the weather and surroundings, as the beautiful passage below illustrates.

What days these were, wet and stormy, and yet there was still something magical about them. All at once the living room became so melancholy and cozy. The damp and cold out of doors made the rooms more hospitable. They had already begun lighting the heating stoves. The yellow and red leaves burned and gleamed feverishly through the foggy gray of the landscape. The red of the cherry tree's leaves had something incandescent and aching and raw about it, but at the same time it was beautiful and brought peace and cheer to those who saw it. Often the entire countryside of meadows and trees appeared to be wrapped in veils and damp cloths, above and below and in the distance and close at hand everything was gray and wet. You strode through all of this as if through a gloomy dream. And yet even this weather and this particular sort of world expressed a secret gaiety. You could smell the trees you were walking beneath, and hear ripe fruit dropping in the meadows and on the path. Everything seemed to have become doubly and triply quiet. All the sounds seemed to be sleeping, or afraid to ring out. Early in the morning and late in the evening, the slow exhalations of foghorns could be heard across the lake, exchanging warning signals off in the distance and announcing the presence of boats. They sounded like the plaintive cries of helpless animals.

As the Tobler household's finances plummet, as creditor's start knocking at their villa, autumn changes to winter, electricity is cut off and the snows start to fall. The drama builds up, one wonders as to why Joseph is not claiming his salary, the surrounding's get gloomier, the household more desperate, Joseph spends more time with Frau Tobler, loving her silently and like Joseph's, the reader's heart gets heavier. This novel speaks about many things but mostly about love. It is a theme that runs parallel to the idea of devotion, service, relations that find expression in Walser's fiction.

I kept Jakob Von Gunten constantly in mind while reading this novel. I don't know whether that was right. However, I felt that I was better off reading the assistant after the latter novel. This is such a beautifully written book, that the description of certain things, moods, states of mind, seasons, weather, ideas and emotions are laid out before you in a delicate, subtle and unforceful manner. These are not words but paintings. And this book is not just a novel, but pages from our lives.

And then, in the end, the reader's heart is shattered.
Posted by Kubla Khan at 6:40 pm