A Life full of Holes 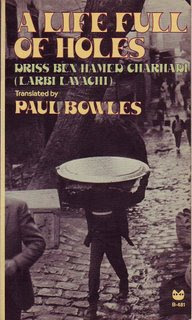 Since there are many ways of reading a novel or into one and since no one way is superior to the other but contingent on one's dominant mood, Larbi Layachi's ( Driss Ben Hamed Charhadi), A life full of Holes is one of those novels that is open and closed at the same time and yet, since it is so simple and well written, it too is open to multiple readings. However, from the point of reading a straight forward story, it has few equals. And that is being honest. Translated by Paul Bowles, dictated into a tape recorder and thus invented by both, this novel is an example of a story par excellence, narrated with patience and that in born art of a true story teller and translated from classical Arabic into an English prose of sublime simplicity, perhaps matching the humility of the narrator and the oblivion of the protagonist.

This novel happened while Bowles lived in Tangier's. Layachi used to meet him quite often and as Bowles tells us, he had the naive or wise understanding that cinema or novels are basically lies told or shown in a stylish manner. Layachi decided to narrate his story ( is it autobiographical?) and as Bowles says, "he never hesitated; he never varied the intensity of his eloquence......Nothing needed to be added, deleted, or altered". In many ways, this is an unusual novel, for while it is so apparently simple, narrating only a tale or story, I thought it is actually quite complex. I did not go in search of complexity in this novel, I thought the story in itself should be enough ( I was in the mood to read a yarn, a story but I ended up reading more than that, and I discovered it through this marvellous blog here ) to convey something beyond a tape recorder, transcription and translation.

Ahmed is an orphan and his mother has remarried, a man Ahmed describes as my mother's husband. They are quite poor and have moved to the Tetuoan-Tangier area. Ahmed is only eight years old when the novel begins. From then on, in the first person, Ahmed tells us the story of his life. It is basically a narration that involves Ahmed trying to find, in one way or another, a job or a way to earn something. His step dad is harsh seemingly and does not like his laziness, and each job that Ahmed takes ends in one way or the other.......he is thus a shepherd and a sheep gets lost or a baker's boy or a waiter in a cafe in tangier. He changes one job after the other, he is forced to and each time he returns home, miserable and tired. The next day sees him off again, in search of something new. These travails find him smuggling kif and Ahmed ends up in prison. from prison to his favourite cafe, back to prison, Ahmed never finds his vocation. At last, Mustapha, a friend, employs him as a watchman on his beach side cafe.

Ahmed is seemingly content for a while till he falls in love with Zohra, a local girl. Rejected by her parents and rejected again the next time, Ahmed vows celibacy. The cafe work draws to an end and he finds suitable employment as a handyman with a young gay couple. They treat him well but soon one of them takes an Arab lover, who starts abusing their trust. Business suffers and one of them returns home and the other devotes himself entirely to his lover Omar. Ahmed finds the new arrangement unfair to his employer, unsettling to himself and thus disillusioned, makes his way to Mustapha's cafe in the city. The novel ends where it began, Ahmed is jobless and penniless, only he is older now, has served two prison spells, has smoked a lot of kif, has loved and lost and as he says, "the stork has to wait for a long time for the locusts to come. Then he eats".

I think this is a marvellous novel, told with compassion and wit, with an eye on economy and with the natural story tellers flair of the unimportant and the needed. the story flows, it has its own inner dynamic, it resolves of its own, it settles down smoothly, we need a little adjustment to its tone and once done, we sail with Ahmed or rather, we walk with him. the translation has an equal genius, it has a cadence rooted in economy again, it matches the Maghrebi Arabic of Layachi, it scores on every point. Most of this novel is brilliantly written and there is hardly any bit that is boring. It has a hypnotizing hold on the reader and a compulsive need to see it right through takes over oneself.

Ahmed is a young man who is always hungry and always disappointed. He grows up in poverty, he only knows poverty. He wants something different and yet he lacks the educational skills to be different. He is aware of his limitations, his class, his upbringing and the inherent backwardness of his people. this is the time of transition in morocco and it is going to be free soon. There are Spanish and French soldiers on the move, there is no rule of law and Ahmed is yearning for his own security. Each new venture brings him sorrow, his experiences in the prison are horrific, he drinks water from the latrines, he is humiliated and abused, beaten and tortured and yet each reprieve finds him optimistic. He never complains, he does not think of complaining, it is not a part of his nature. it was unheard of for a colonized man then to have had the temerity to complain for a just treatment. It seems the beach and the sun were enough gifts within themselves, they were free.

Within this narrative, Ahmed tells us that he must celebrate his country's freedom by smoking kif for three days. He visits whorehouses, he borrows his stepbrother's clothes, he drinks tea, he has coffee with milk. Ahmed is not inherently concerned with the political situation around him. He is worried about his own situation, about Zohra, about wearing new clothes, about tomorrow. Ahmed is not an anti-hero, he always submits. He is grateful for whatever happens. Allah- ihhenik, he says. Inc ha- Allah, maybe tomorrow I find a job. Ahmed is quite fatalistic, he believes in written destinies, incontrovertible truths and yet, he never prays outwardly. He lives solo, he loves in secret, his inner life is thus inherently richer than his outward one. He talks with his employers, Francois and Marcel, about life, the world. He has seen a few things, he is not altogether uncouth.

Ahmed's situation must also be analyzed from his situation. Thus, this story can only be that of a Maghrebi man, a place that for the Arabs and the original Berbers, is still the farthest corner of the Arab world, the most western. It is also understandable as to how so many artists found refuge in Morocco, particularly Tangier's in the last fifty years or so, in the transitional period from colonised countries to relatively free ones. The Maghreb has, to some extent, had its own inherent response to Arabization and then colonisation, and the blatant homosexuality of its devotees, like Jean Genet or at present, Juan Goytisolo has never raised an eyebrow, in what is still predominantly a conservative culture. Ahmed, the poor boy and aspiring man is moving in the fringes of this society. When he discovers Francois sleeping with Omar, he is neither shocked nor puzzled nor even bothered. It is not my life, he thinks.

The reality of the encounter between the colonised-coloniser can be gleaned from this novel. Ahmed has no illusions about his own worth, he knows the apparent superiority of the coloniser, he does not grudge him, he wants equal treatment though. He pleads for his money when Francois is himself broke, but he never begs. Ahmed has inborn Sisyphean qualities, he struggles and then departs, keeping faith in a better tomorrow. And a similiar encounter takes place everywhere in this world, between the weak and the strong, only there are some people strong enough to remember and transcribe the stories of those weak people who cannot remember, because they are destined for total oblivion. Bowles has translated Layachi, he also translated Mrabet and Choukri, he is the sympathetic foreigner turned somehow native.

"I went along, walking, walking", Ahmed says and towards the end, "today and tomorrow, today and tomorrow ," Ahmed keeps on walking and walking. Says Ahmed, "Even a life full of holes, a life of nothing but waiting, is better than no life at all. An empty sack is better than no sack at all". Told with simplicity and honesty, this story and this novel is truly a classic and representative of a people and life that was marginalized by colonization. Whether such lives have actually changed in the post colonial era or have become better is open to all. In North African fiction, particularly of Tahar Ben Jelloun, the evidence is otherwise. But one can only hope, today and tomorrow.
Posted by Kubla Khan at 6:00 pm

i couldn't get into this when i first got it but t was wildly taken by it.

nice to see mention of tahar ben jelloun. you should stick something up about him. i;d be curious to see what you'd choose tho having just looked at amazon you'll be limited as he'sless translated han i might've thought

Tahar ben jelloun.....
I have read his "that blinding abscence of light". i am not sure whether i actually liked it. it is poetic, granted, but it lacks something vital.

are you aware of the libyan novelist Ibrahim al-koni? there are a few on amazon and i really liked his style etc. you could pick "the bleeding of the stone" or "Anubis".

I have an odd case against arabic fiction in general. it meanders, it lacks the structure of the novel as is known to the western reader.some of it is loosely fable like( new east european and latin american fiction is almost like this too....see milorad pavic, the serbian novelist)

a life full of holes is just magical.as you said, one can get wildly taken by it. the translation is an important element too.

have you read any bowles?

see k, i have probably the complete Bowles at home. and what do you think of jane's work?
and what must i see here, you have an odd case against arabic literature. now if that is not racist, they have such an uneeatly style...(sorry, i just couldn't resist this one)

Antonia....my case is against the structure, not the neatness. perhaps the neatness is to do with too much dust!

i read a novel sometime ago.....it was a mix of prose inside a poem inside a thought inside a fable.....sounds strange. it is called Memory in the flesh. i liked it but not the structure somehow. maybe, i explain it some other time.

i'll keep an eye out for the libyan guy - don't believe i've ever read any libyan fiction.

i know what you mean about 'arabic' fiction but i kind of like that eevn when i'm not enjoying it. seems like there's more possibility than the 'western' novel, which these days, seems just too up itself.

read most of bowles when i was younger, didn't enjoy it that much and short story wise found it a bit irritating. i got that sense of some ex-pat type who 'knows his natives' and that doesn;t sit well with me